A LOVELY TALE has emerged from the weekend’s Champions League Final in Madrid after a Tottenham fan put rivalry aside and returned Liverpool fan's wallet he found on the floor of a taxi.

The wallet contained €800 as well as a letter from his late wife who had sadly passed away in January.

Allan Bissell, 42, said on Facebook that he found it in a Madrid taxi, and after discovering what was inside, scrambled to return the wallet to its owner.

Luckily enough, the Liverpool fan’s contact details were inside, and Alan managed to get in touch with him before the Final kicked off and organised a meet-up.

“I phoned him up and he started crying,” Alan wrote.

After the wallet, and letter, were returned, and Alan had received “the biggest cuddle ever”, the pair went their separate ways as their teams did battle inside the Wanda Metropolitano on Saturday evening.

Following Liverpool’s 2-0 victory, he said he received a text from the grateful Reds fan, apologising for the win, and saying that he wanted to donate £500 to a charity of Alan’s choosing. 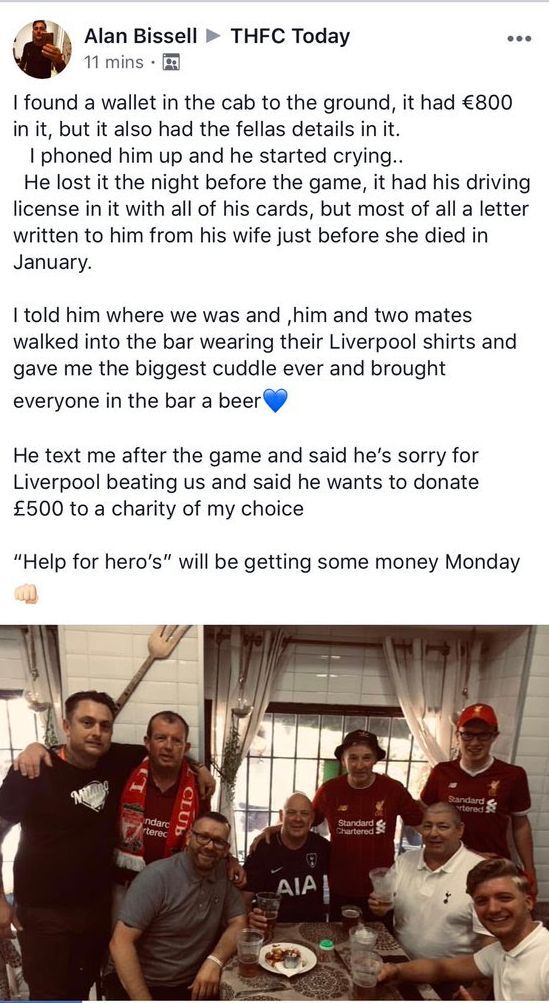 “I found a wallet in the cab to the ground, it had €800 in it, but it also had the fellas details in it. I phoned him up and he started crying.

“He lost it the night before the game, it had his driving license in it with all of his other cards, but most of all a letter written to him from his wife just before she died in January.

“I told him where we was and, him and two mates walking into the bar wearing their Liverpool shirts and gave me the biggest cuddle ever and brought everyone in the bar a beer.

“He text me after the game and said he’s sorry for Liverpool beating us and said he wants to donate £500 to a charity of my choice.

“‘Help for Heroes’ will be getting some money Monday.” He wrote.

What a lovely gesture.

Football can certainly divide people, but it can also bring people together just as easily.

Unfortunately for Alan, he witnessed his team lose in their first ever European Cup final after goals from Mohamed Salah and Divock Origi sank Tottenham, but his trip to Madrid could never be seen as a wasted one - not least for the extremely relieved Liverpool fan who got his wife’s letter back.