GIANT footsteps, dragon’s eggs and three-eyed ravens have been spotted across the North of Ireland this month – with more expected to crop up over the coming weeks.

The fantastical props are appearing in locations across Belfast and further afield in the North, directing Game of Thrones fans to the spots featured in their favourite series.

There are even wooden signs pointing the way to the most iconic areas of the region where the series is filmed, thanks to a campaign launched by Tourism Ireland in partnership with the HBO network this month.

The campaign hopes to build on the popularity of the Game of Thrones series and encourages tourists to come and visit the North to experience the beautiful backdrops featured in the medieval fantasy epic for themselves. 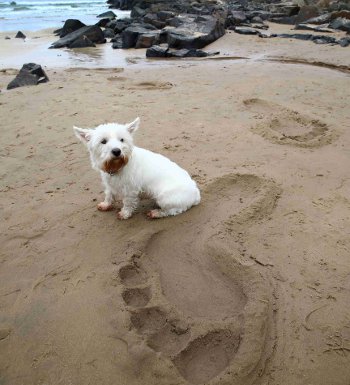 This week keen-eyed fans will have spotted three-eyed ravens - replicas of those used in the series  - perched on top of old-fashioned wooden signs dotted around the North, while mock dragon eggs were placed among fruit and vegetables in a market stall in St George’s Market in Belfast.

The eggs were ‘for sale’ to people visiting the market for the price of 125 Gold Dragons – the currency used in Game of Thrones – Tourism Ireland told The Irish Post this week.

She added: “Viewers of the series from America, Australia and across the world now know places such as Dark Hedges in Country Antrim and Castle Ward in County Down and I welcome the partnership between HBO and Tourism Ireland. This campaign will help to encourage audiences from around the world to visit the filming locations and not only experience for themselves the majestic beauty of our countryside but also our local cuisine, restaurants and hospitality.”

Tourism Ireland’s 14-week campaign, which was timed to kick off with the return of the fifth series of Game of Thrones this month, hopes to promote the North of Ireland across the globe by reaching out to the estimated 100 million fans of the show worldwide.

Rolled out via adverts on their Facebook and Twitter feeds, the campaign will target Britain, the United States, Canada, Australia, France, Germany, Spain, Italy, the Netherlands and Scandinavia.

Tourism Ireland CEO Niall Gibbons explained: “We aim to build on the success of last year’s Game of Thrones campaign, reaching out to the show’s global fanbase, and demonstrate the spectacular scenery of Northern Ireland.”

He added: “Game of Thrones fans worldwide will see these ads, spiking their curiosity about the landscapes and locations featured in the series and inspiring them to come and explore them for themselves.”

A second phase of the campaign will be rolled out by Tourism Ireland in the coming weeks, which they claim has “even more surprises” in store.