2. Robinson said that because her mother assumed she would be the only girl in her family, "she gave me as many names as she could"

3. Robinson was born in 1944 in Ballina, County Mayo into a middle-class family

4. She spent time in finishing school in Paris as a teenager and this was the inspiration for her choice of Edith Piaf’s Non, Je Ne Regrette Rien, as one of her favorite songs when she was a guest on BBC Radio 4's long-running show Desert Island Discs

5. Beating off her main rival, Brian Lenihan, Robinson was inaugurated as the seventh President of Ireland on 3 December 1990

6. She became Ireland's first female President, paving the way for Mary McAleese who filled the role after her 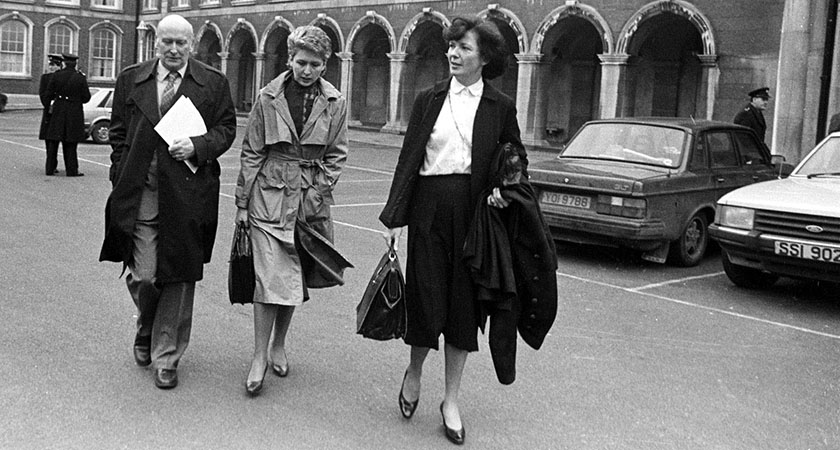 7. At 25, Mary Robinson became Ireland's youngest professor of law when she was appointed Reid Professor of Constitutional and Criminal Law at Trinity College

8. Long before the same-sex marriage referendum was passed in Ireland in May 2015, Robinson worked as a legal advisor in the campaign for reform of homosexuality laws

9. Robinson was a brilliant barrister and her legal clout came in particularly handy when dealing with former Irish Taoiseach Charles Haughey who tried to argue, unsuccessfully, that Robinson was doing more in her role as President than the constitution allowed. Unfortunately for Haughey, he picked the wrong women to argue with on points of the Constitution

10. In a swerve from tradition, Irish State broadcaster RTÉ  chose to air Robinson's victory speech instead of the nightly Angelus

11. In that same speech, Robinson stated that she would represent the Irish at home but also wanted to represent the 70 million people around the world who claim Irish descent and the diaspora remained an important issue to her throughout her presidency

12. Robinson's victory speech in 1990 also gave a special mention to the women of Ireland, Mná na hÉireann, who she famously  said "instead of rocking the cradle, rocked the system" 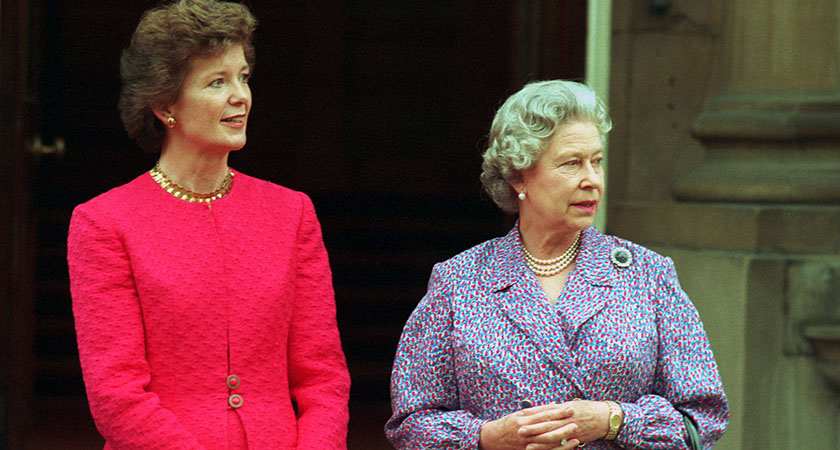 13. Robinson has referred to herself as ‘deeply spiritual’ but says she was ‘very troubled’ by aspects of the authoritarian Catholic Church

14. In 1971, as a Senator, Robinson attempted to introduce the first bill proposing to liberalise the law on contraception in Ireland and was sent hate mail and denounced for her efforts

15. The Co. Mayo native has joked that Simon and Garfunkel’s song Mrs Robinson, played over and over again during her presidential campaign, has “lost its charm” for her

16. Robinson was the first serving Irish President to visit the United Kingdom and meet Queen Elizabeth II at Buckingham Palace

17. Robinson's approval ratings rocketed when she shook hands with Gerry Adams. She told the Harvard Business Review it was a "difficult decision to go to Catholic, Republican West Belfast to meet the communities there... This was a no-go area because of the IRA." She was  heavily criticized for that visit. "The British government hadn’t wanted it to happen; neither had the Irish government or most of the Irish newspapers. Very shortly after, I had my highest ratings. The Irish people said it was the right thing to do"

18. It was her husband Nick (who she met at Trinity College, Dublin) who urged her think seriously about the Presidency

19. Robinson's father, a doctor, was not initially supportive of her choice of husband, but she married him anyway. She has been happily married for over 44 years 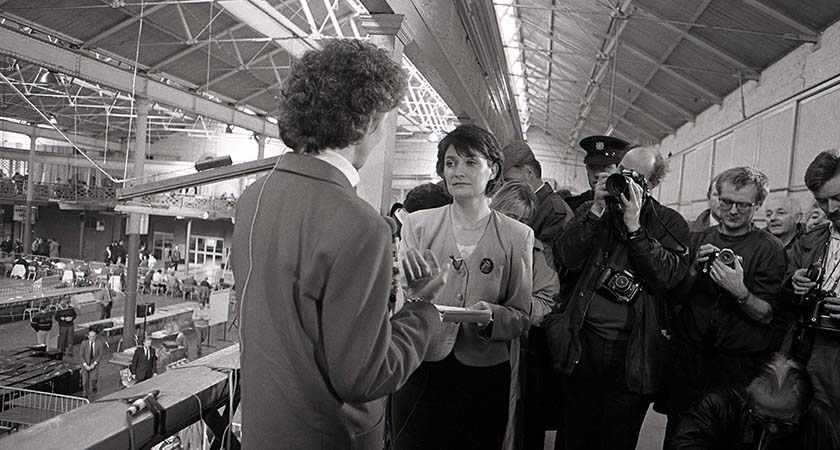 Mary Robinson being interviewed by Una O Hagan of RTE while photographers take pictures at the count centre in the RDS in Dublin at the moment it became clear she had won the presidential election Photo Eamonn Farrell/RollingNews.ie

20. Robinson was president from 1990 to 1997. She resigned shortly before her term was due to expire to become UN High Commissioner for Human Rights, adding that she was under intense pressure from Kofi Annan to start her new role

21. Robinson described the transition to that demanding new role in 1997 as "brutal"

22. Author David McWilliams described Robinson as "an advocate for the underprivileged", adding that "While so many of our political class do their utmost to shame, embarrass and ruin us, she is a beacon: a real reason to be proud to be Irish"

23. By Christmas of 1997 she was  “exhausted” and “a wreck”. Her older brother, a doctor, told her she was heading towards a breakdown she heeded his advice to review the way she was working

24. Robinson sais she “couldn’t say no,” when she got the call in March 2013 asking her to act as Special Envoy for the Great Lakes District and Democratic Republic of Congo. “I knew that problem for 19 years,” she added, referring to her first significant visit to Rwanda in 1994 to witness the aftermath of the genocide there. She was also the first head of state to visit Somalia following the crisis there in 1992

25. In September 2012, her memoir Everybody Matters was published. Robinson is widely regarded as a transformative figure in Irish life, a champion of human rights not just at home but globally and now in her 70s, she shows no sign of stopping