THE TWITTERSPHERE erupted into concern for Dermot O’Leary yesterday, when the television favourite tweeted that he had nearly been knocked off his motorbike three times in one day. 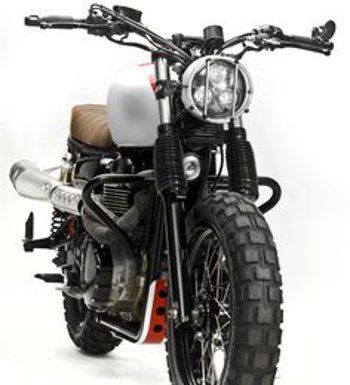 Dermot O'Leary is a fan of the Triumph Bonneville motorcycle range

The former X Factor host, whose parents hail from Co. Wexford, called on the Uber minicab firm to “find some drivers that could, maybe drive” after being “almost knocked off” his “trusted” Triumph Bonneville 3 motorcycle three times in one day.

The Radio 2 DJ indicated that the incidents were all connected to drivers from the Uber minicab firm – who responded to his concerns via Twitter, stating; “So sorry to hear that. Hope you're okay; could you please email any details you have to [email protected] so we can investigate?”

O’Leary fans were not impressed with the star’s unfortunate accident hat-trick – claiming the star had been “Ubered” and calling for him to “stay safe” on the roads, while championing the merits of the traditional London black cab in the taxi market over the San Francisco-based newcomer.

But Twitter user @lifeislife86 was less sympathetic, suggesting to O’Leary “maybe if it's happened 3 times its you that can't drive”, to which the presenter responded “Well there's always that. But in my mind I'm like Streethawk out there”.

Read some of the exchanges here:

After almost being knocked off my trusted Bonneville 3 times today any chance @Uber you could find some drivers that could, maybe drive? Ta.

@radioleary So sorry to hear that! Hope you're okay; could you please email any details you have to support@uber.com so we can investigate?

@radioleary @Uber None of them can drive in London keep em peeled eyes wide open. Stay safe dont get #ubered

@lifeislife86 @Uber Well there's always that. But in my mind I'm like Streethawk out there.

@radioleary @Uber That's why black cabs are the only way to get around London, safe and the best drivers - hope you and your lovely bike ok