MORRISSEY HAS hit out at the makers of The Simpsons after he was mocked in a new episode of the long-running animated series.

The offending episode, titled Panic on the Streets of Springfield, saw Lisa dream up an imaginary friend who bore more than a passing resemblance to The Smiths frontman.

Though the writers stopped short of naming the character Morrissey, he was noticeable for being a depressed indie singer from 1980s Britain.

Voiced by Benedict Cumberbatch, the character even sang a series of Smiths-style songs written by Flight of the Conchords co-creator Bret McKenzie.

The target of the spoof was not lost on Morrissey who took to social media after the episode aired to hit out at the show, which he said had taken a “turn for the worst” in recent years.

“Surprising what a “turn for the worst“ the writing for The Simpson’s tv show has taken in recent years,” the statement began.

“Sadly, The Simpson’s show started out creating great insight into the modern cultural experience, but has since degenerated to trying to capitalise on cheap controversy and expounding on vicious rumors.

“Poking fun at subjects is one thing. Other shows like SNL still do a great job at finding ways to inspire great satire. But when a show stoops so low to use harshly hateful tactics like showing the Morrissey character with his belly hanging out of his shirt (when he has never looked like that at any point in his career) makes you wonder who the real hurtful, racist group is here.”

He added: “Even worse – calling the Morrissey character out for being a racist, without pointing out any specific instances, offers nothing. It only serves to insult the artist.
They should take that mirror and hold it up to themselves.” 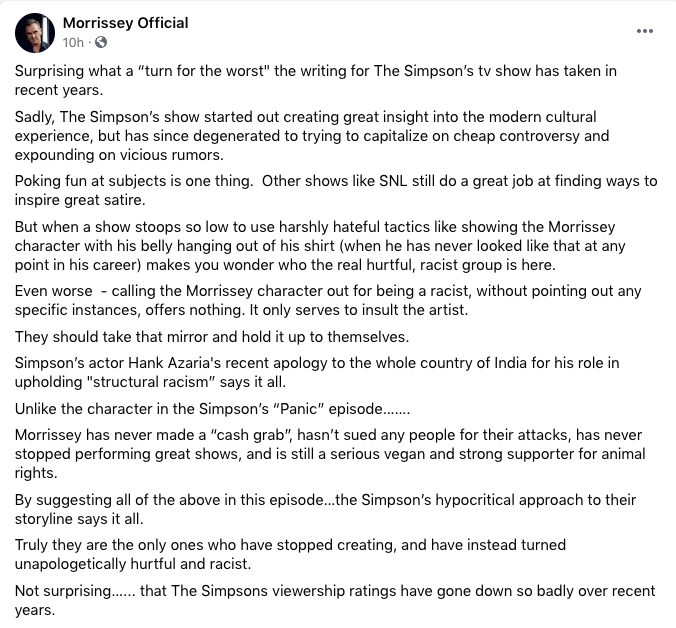 Morrissey, who courted controversy during a recent TV appearance in the US by wearing a badge in support of a far-right anti-Islam political party from the UK, also took aim at the hypocrisy of The Simpsons for accusing anyone of racism.

He was speaking in reference to the issues the show has faced over having Hank Azaria, a white actor, voice the character of Apu.

“Simpson’s actor Hank Azaria’s recent apology to the whole country of India for his role in upholding ”structural racism” says it all,” Morrissey said

“Unlike the character in the Simpson’s “Panic” episode……. Morrissey has never made a “cash grab”, hasn’t sued any people for their attacks, has never stopped performing great shows, and is still a serious vegan and strong supporter for animal rights.

“By suggesting all of the above in this episode…the Simpson’s hypocritical approach to their storyline says it all. Truly they are the only ones who have stopped creating, and have instead turned unapologetically hurtful and racist.

He concluded: “Not surprising…… that The Simpsons viewership ratings have gone down so badly over recent years.” 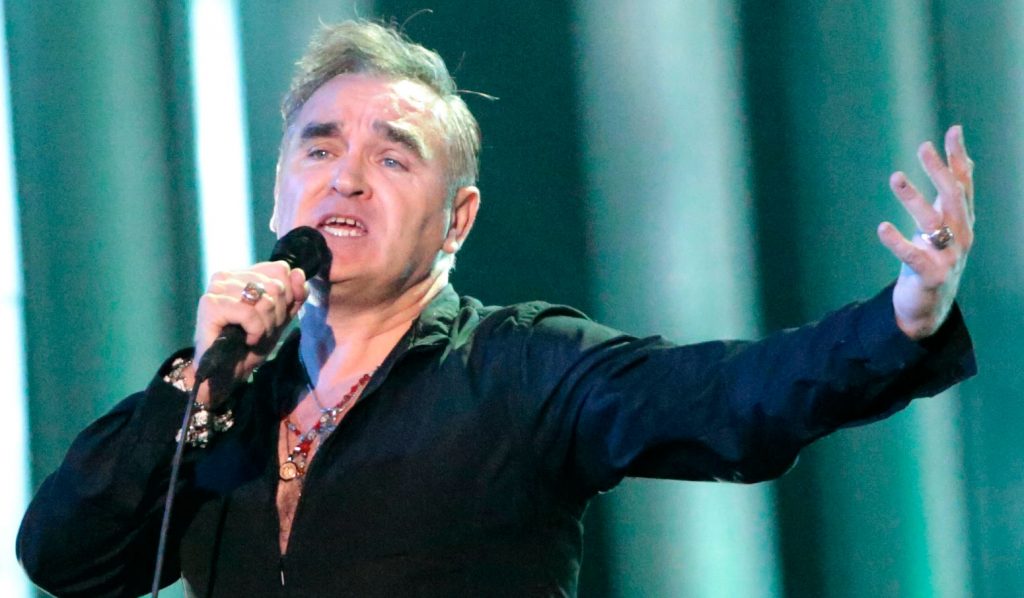 Morrissey has reportedly previously turned down the chance to voice a character in The Simpsons having been offered a role in the Season 15 episode ‘The Regina Monologues’.

The Simpsons head to Britain for the epode with then-British Prime Minister Tony Blair and Harry Potter author J.K. Rowling both making appearances.

Famous for singing of his "Irish blood, English heart", Morrissey boasts strong Irish heritage courtesy of his late mother, Elizabeth Anne Dwyer, who was from Dublin

Born and raised in Dublin, Dwyer emigrated to England with her husband Peter Morrissey in 1958, settling in Davyhulme, Manchester.