A rescuer pulls a dog out of the rubble during the search for survivors in Mexico City on September 20, 2017 after a strong quake hit central Mexico on the eve. A powerful 7.1 earthquake shook Mexico City on Tuesday, causing panic among the megalopolis' 20 million inhabitants on the 32nd anniversary of a devastating 1985 quake. / AFP PHOTO / Yuri CORTEZ (Photo credit should read YURI CORTEZ/AFP/Getty Images)

AN IRISH man living in Mexico has told of how people trapped beneath rubble are texting friends and family for help after Tuesday’s devastating earthquake.

Adrian Freeney, who lives in an apartment in the centre of Mexico City, said the sirens haven’t stopped since the 7.1 magnitude quake struck leaving almost 250 people dead.

“It started with a little rocking and then suddenly it just got more and more violent,” he said.

“It wasn’t a moment of impact, it just built up. I don’t know how long it lasted, probably a couple of minutes.

“All the doors opened, I thought my computer was going to slam to the floor."

He added: “I got down on the ground. I thought the building might collapse.” 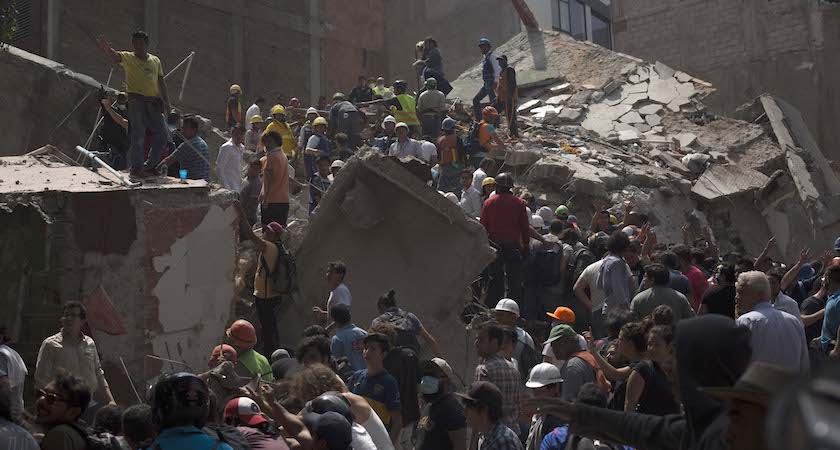 Mr Freeney said he left his apartment to find the street was filled with glass, rubble and people looking to help.

“The streets were packed, absolutely packed. Everybody was out there and then the sirens started soon afterwards, they’ve been going on for about 12 hours now,” he said.

“My wife’s Facebook is full of people posting their missing relatives, a lot of people are under rubble sending messages saying exactly where they are and that’s pretty scary.”

By cruel coincidence, many of those trapped by falling rubble were commemorating the 98 people who died when a M8.2 earthquake struck the Central American country two weeks ago.

Tuesday’s tremors came on the anniversary of the 1985 quake that devastated Mexico City, killing 5,000 people and destroying 10,000 homes.

Tragically, a significant number of the victims of this week’s earthquake are believed to be children – after three floors of the Enrique Rebsamen primary school in Mexico City collapsed into one.

Rescue workers have recovered 25 bodies from the rubble of the school so far, but 30 children and eight adults remain missing.

Tsunami warning for US and Canada after 7.8 magnitude earthquake strikes off coast of Alaska

Earthquake detected off the coast of Ireland