A West Sussex who was abandoned as a baby in Ireland is desperate to find her biological family.

Mary Petworth knows very little about her early years other than she was left outside a church in Tuam, Co. Galway in 1953.

She was given the name Mary O’Brien by those who cared for her after she was discovered.

“As far as I know it was the priest who found me,” she said. “But even that isn’t clear.”

Mary now desperately wants to find out about her early life - where and exactly when she was born and if she has any living family.

“I suppose it’s possible that my mother might be alive,” she said. “I’m 62, so if my mother was a teenager when she had me she might still be alive.

“Of course I’ve no idea who my father is. I never cried for him. But I always cried for my Ma. I don’t think I’ve a tear left in my body over weeping for my Ma.”

The Irish woman received her birth certificate in 1990.

The Western Health Board in Ireland wrote to her saying that she had been abandoned in the vicinity of St Mary’s Home on May 16, 1953.

“The letter from the Western Health Board confirmed that a birth certificate couldn’t be supplied,” she said.

“It said that the law requires that either your mother or somebody present at your birth must register the event, so this not being done it is not possible to do it now.”

But the Western Health Board was able to confirm a few of the details.

The letters says: “I can tell you that you grew up initially in St Mary’s Mother and Baby Home, Tuam. You were brought to St Mary’s Home on 16.5.1953 having been found in the vicinity as a newborn baby abandoned.

“Your mother did not obviously present herself, and it is likely that the name O’Brien was chosen as the identity of your mother was unknown.” 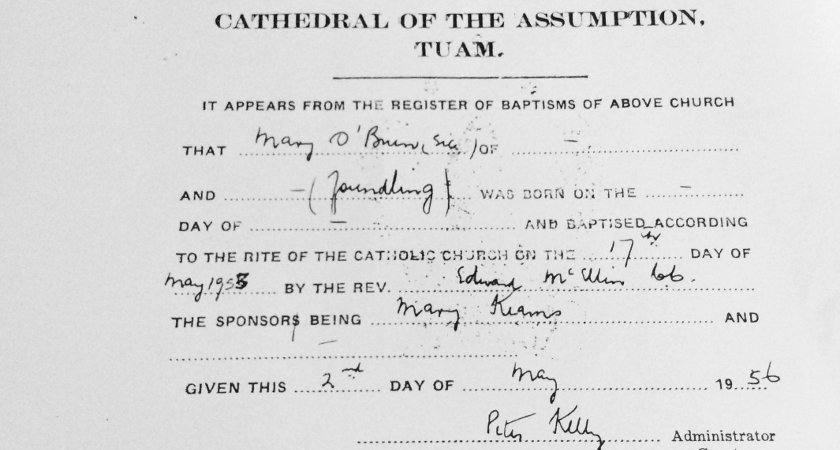 Mary was registered as a 'foundling' under the name Mary O'Brien

After a spell in hospital, Mary was transferred to Sean Ross Abbey in Tipperary where she spent some time — although she’s not clear how long.

The Irish woman has been collating documents for a number of years as she was asked to appear in front of the Residential Institutions Redress Board to receive compensation for maltreatment in the mother and baby home.

Her solicitor, Eastcote-based Eileen McMahon, was instrumental in helping to track down a lot of that paperwork.

But as many of the places where Mary lived as a child have since been closed down, facts remain sketchy.

She thinks she was put up for adoption in the US but her memory of this remains hazy.

One thing she does know for fact is that from about the age of four or five she found herself with foster parents in Gory, Co. Wexford.

“That was an awful time and I still bear the scars of their treatment. I was beaten, I was sexually abused. I was called for everything. It was an appalling upbringing,” she said.

At the age of 12, Mary got a partial escape from cruelty when she was transferred to St Joseph’s Home in Kilkenny.

“Things were rough there, particularly from the woman who was in charge, who wasn’t a nun. I found most of the nuns okay. I think they were doing their best for the most part.

"But the woman in charge was dreadful. The name-calling was dreadful  - I can still hear it.”

Mary eventually got compensation from the Redress Board for her time in St Joseph’s.

“But the people who should have compensated me was the foster parents. But they’re dead now.”

After St Joseph’s, Mary got a job working in Jacob’s biscuit fac- tory in Dublin, then headed for England.

She worked in Butlin’s in Bognor Regis for 13 years and was later accepted into Chichester College where she undertook a course in counselling.

This took her into the care profession where she has worked in various capacities over the years.

She has been married for 27 years to Basil Petworth, an English- man, and has a son Gavin.

She still lives in Bognor Regis.

If you have any information that might help Mary in her search please email [email protected] or call 020 8900 4193.