He made a historic trip to Warrington, the site of an IRA bomb attack in 1993, and later headed to the University of Liverpool, where he received an honorary degree.

I spent the day one step behind the President, and here's what I learned:

1. President Higgins is still haunted by the tragic events of the 1993 IRA bomb attack in Warrington

Addressing the Parry family on Wednesday at the Tim Parry Johnathan Ball Foundation for Peace Centre, the President reflected on the day 22 years ago when news of the “terrible atrocity” that left dozens injured reached Ireland.

“I remember the terrible sadness felt across these islands,” he said.

“The loss of a child is the greatest of human tragedies, both in the grief and sadness that such a loss causes to his or her family, but also in the tragedy that the loss of potential and possibility constitutes.”

2. The President believes reconciliation can come from great tragedy

“It assumes a belief that, despite all the hurt, there can be a way forward where the violence and the conflict of the past do not dictate our present, or foreclose on the possibilities of our future.”

3. He believes that social isolation is one of the root causes “inviting” people to turn to extremism

“We know that those who are disenfranchised economically are vulnerable to the predations of the sponsors of extremism,” he said.

President Higgins went on to outline youth unemployment, inadequate social infrastructure and limited opportunity for participation as important issues that needed to be tackled. 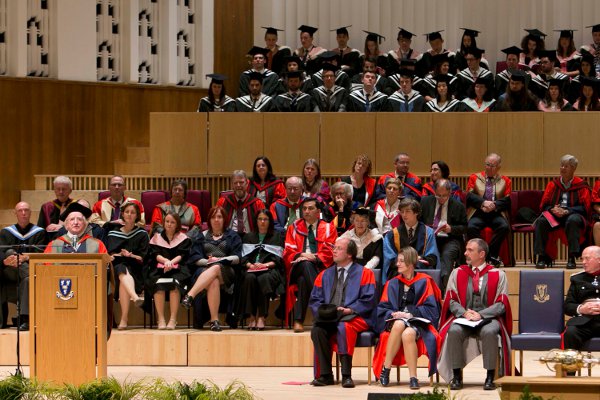 4. President Higgins was the first in his family to go to university

At a University of Liverpool conferral ceremony in the city’s Philharmonic Hall, he told a hall full of graduates how he had become the first member of his family to attend university.

President Higgins added that at the time a secondary education in Ireland was a privilege, whilst further education was regarded as being within the reach of only the wealthy and elite.

“It is something that many who were the first in their family to push open that important door to third level education would recognise and I am sure some may still recognise this experience today.”

5. He is now a graduate of the University of Liverpool

The University of Liverpool has welcomed many Irish students over the years with its newest graduate being celebrated when President Higgins was called to the stage to receive his honorary Doctor of Laws degree.

In his address to those in attendance, he said: “I am greatly honoured to receive this honorary degree from the University of Liverpool and to know that I join such an impressive and prestigious roll call of previous recipients of this honour.

“The university has much to be proud of and has achieved considerable success in opening the gates of possibility for students from traditionally low participation neighbourhoods.”

5. Promoting human rights is an issue close to the President's heart

During the graduation ceremony, President Higgins' efforts of campaigning throughout his life for human rights was praised.

In addition, he has worked tirelessly to promote peace and democracy in Ireland and in many other parts of the world, from Nicaragua and Chile to Cambodia, Iraq and Somalia.

6. Time is not of the essence

When addressing press and guests at engagements throughout the day, President Higgins was charming and respectful in making sure that he spent as much time as he could speaking to people.

As the self-proclaimed President of the Diaspora, this was an important move during his first official visit to the North of England town of Warrington, and second trip to Liverpool.

"Don't worry about it, we've got another half an hour," he quipped.