WHEN Bosnia and Herzegovina qualified for last year's World Cup, the easy thing to say was that their football team served as a symbol of a new country.

Life is never as simplistic as we would like it to be, however, so even though the maturation of a team containing Muslims, Croats and Serbs was a sign of what can be achieved through co-operation and teamwork, it could never eradicate the scars of what happened the country during the 1990s war.

A year on and the ups and downs suffered by the team since that tournament has acted as a more accurate metaphor for how perilous any peace can be. Positioned in Wales' group, they started poorly, looked set to miss out even on a play-off spot before rallying to finish third, narrowly ahead of Israel.

The turning point? Two things, first the introduction of Mehmed Bazdarevic as their coach last December and secondly, the return to form of Edin Dzeko, the Manchester City striker on loan with Roma.

Both men are fascinating characters, Bazdarevic - the coach - was capped 54 times by the former Yugoslavian national team but never made it to a major tournament, after being suspended for Italia 90 (banned for spitting at a referee) before he, along with his star studded colleagues, missed out on Euro 92 because of the ongoing war.

As the country broke up, and newly formed Bosnia gained independence, Bazderevic became their first captain. Success was a stranger, though, and remained that way until Dzeko came of age. 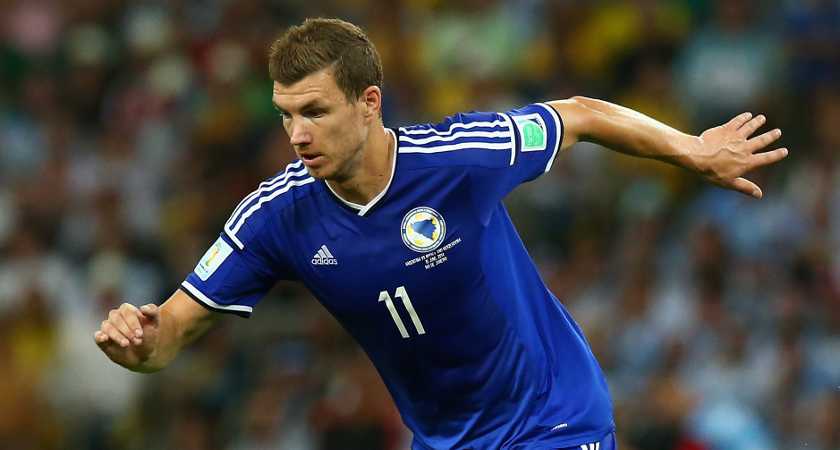 Edin Dzeko [Picture: Getty]
All of a sudden, like so many other European countries (think Wales and Gareth Bale, Sweden and Zlatan Ibrahimovic, Poland and Robert Lewandowski), Bosnia had a talisman to build their side around.

Qualifying for Brazil came largely on the back of his form - and once there, they would have fared better only for a terrible refereeing decision against Nigeria in their second group game when Peter O’Leary, the New Zealand ref, disallowed a Dzeko goal. As is his way, Dzeko didn't mince his words.

“The referee was shameful for this competition,” he said. “In the first game we did everything, and Argentina beat us, but today we should have won this game. We are going home, we are sad because of that but the referee should go home too, because he changed the result, he changed the game, and that’s why we lost.”

The losing streak continued into this campaign. And after taking just two points from their opening four games, Safet Susic, their former coach, paid the price. Out he went and in came Bazdarevic to win four of his next five games, returning to a 4-4-2 formation favoured by the team and bringing exiled stars, Emir Spahic and Zvjezdan Misimovic, back into the fold.

Something else also came back, the team's spirit and confidence, helped by Bazdarevic's decision to jet around Europe to meet with his players at their clubs. "It had a huge impact," said Asmir Begovic, the Chelsea goalkeeper.

As did Dzeko, who scored seven goals in the campaign - he has 44 from 74 internationals overall - and while his final year in Manchester was miserable, he showed fine form for Roma last week, scoring against Bayer Leverkusen in the Champions League.

With all this in mind, Martin O'Neill has a plan to cope with the Bosnian. "When you have a player like Robert Lewandowski in your side - who is always available for Poland - you become a different team," O'Neill said.

"Bosnia have Dzeko - a very exciting player and are, accordingly, a very exciting team to watch. Manchester City thought they could do without him for a while, and now he’s plying his trade in a big League with Roma. But he’s very dangerous. We have to be on our guard against him."

So in Zenica this week, he will unashamedly hope to deliver a low-score bore.

Martin O'Neill [Picture: Inpho]
"Look, I love my teams to play with width but if you’re not getting the ball, then some players in the team become redundant. The strength we had in our game against Germany at home, for example, stemmed from the packed midfield we put out in that match.

"In terms of possession, you’ve got to learn how to play without the ball. We have done that."

And that is what they plan to do away in Bosnia - before attacking with intent in the return leg at the Aviva next Monday. Yet again, as has been the case throughout this campaign, O'Neill will pick his team on a horses-for-courses basis.

What we can expect, therefore, is to see James McClean start in Zenica but be benched in Dublin with Wes Hoolahan enduring the opposite experience. Daryl Murphy, yet to score for Ireland, is trusted by O'Neill to do a job.

He stands a great chance of starting in the away leg with Jon Walters certain to return to the side, injury permitting, for the second leg. Darren Randolph could get the nod in goal; Ciaran Clark, Richard Keogh and Marc Wilson will compete for the central defensive positions; Robbie Keane may have to settle for a place on the bench.

"The away goal is foremost in our minds," said O'Neill. "People are asking if we are going to sit in and I don't think we can afford to. We might be driven back, but we won't be going back by choice."

Instead, he hopes to be flying back with a draw and a chance of qualifying. Achieve this and it'll top any achievement he has managed since his Celtic days.

Ireland 2-0 Bosnia and Herzegovina: What a night to be Irish