IF YOU'VE got a tattoo, you've more than likely heard the phrase 'You know that's going to be on you for the rest of you life'.

Most of the time, people get tattoos after careful thought and thorough research, and are 100% certain they'll be happy with it for the rest of their lives-- whether it's got sentimental value or is just for fun (Such as these Father Ted tattoos!).

Sometimes, though, mistakes are made-- as this person had the misfortune of learning.

Clearly trying to get in touch with her Irish roots, an American woman attempted to get the words 'Live, laugh love' tattooed on her back in Gaeilge, the Irish language. 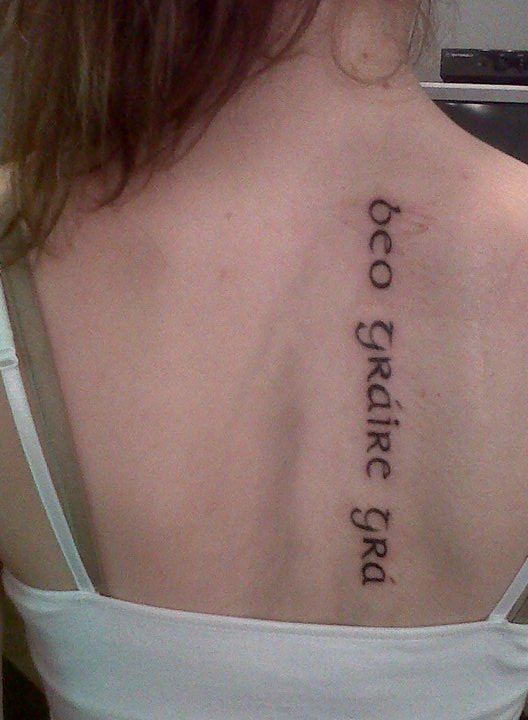 The only problem is, that's not what it says-- at all.

Instead, the woman got the words 'Beo, gráire, grá' tattooed in Gaelic script: Grá means love, so she got that right, but beo means 'alive' rather than 'live'.

And gáire means laughter, but 'gráire' means nothing at all-- in fact, the closest thing to 'gráire' is graíre, which means stud horse.

So the failed attempt to get Live, laugh, love in Irish, actually became... Alive, stud horse, love in Irish. Not exactly a top-class tattoo.

A photograph of the tattoo, posted to Pinterest, found its way onto Twitter, Reddit and every other corner of social media, and the responses from Irish people are just about what you'd expect.

"How did this happen? How did they make up a word?" one person wrote on Twitter.

On Reddit, where the now-infamous tattoo also made an appearance, there was more exasperation.

This is far from the first time non-Irish speakers have made a mistake while trying to get a tattoo as Gaeilge-- a famous example is the Celtic Cross tattoo from 2017 which bore the words 'An bhfuil cead agam dul go dtí an leithreas'. "It says in gaelic 'You will forever be in my heart'", the owner of the tattoo wrote on social media while showing off his new ink.

But as any Irish person will tell you-- even those who can only remember the very basics-- that is not what it means...