TWO inspirational young women have been forced to pull out of their “nightmare” Atlantic rowing race.

Hannah Lawton, 24, and Lauren Morton, 23, had been in their boat since December 4 and had hoped to touch down in the Caribbean in early February.

But rather than recuperating in paradise, the women spent the last six weeks in despair after a litany of catastrophic setbacks left them stranded in the middle of the Atlantic Ocean.

After weeks of desperately trying to mend their broken vessel, they called it quits on Monday night.

John Lawton, who has roots in Co. Mayo, said his daughter was “absolutely gutted” to have to abandon their voyage.

“The girls tried so hard to get where they were and never thought for one moment that they would not make it,” he told The Irish Post.

“But they just couldn’t fix the boat and had to make a decision. So finally they decided on Monday that it was pointless to continue.”

He added that Hannah and Lauren were rescued on Tuesday by a cargo ship passing their location, still 800 miles from their intended destination of Antigua, and are due to arrive in Canada next week.

The news came a week after the women vowed to complete their voyage despite the setbacks.

“It has been very emotional, with so many ups and downs for us both,” Hannah told The Irish Post from the boat last week.

“Never knowing if we will ever make the crossing or not is difficult, but we want to continue and complete it, not only for ourselves but everyone else as well.”

The women were stuck at a near-standstill since their rudder snapped in late January.

Their fate then took a dark turn days later when their boat capsized, leaving Lauren with a deep cut in her head.

With her friend losing blood and having no chance of seeing a doctor, Hannah, who has roots in Co. Mayo, had to overcome her fear of blood and glue Lauren’s head back together.

They hoped that would be the last of their setbacks as they waited for a support vessel to bring a new rudder last week.

But the elation they felt upon seeing the yacht quickly turned to dismay when they realised the rudder they had been brought would not fit their boat. 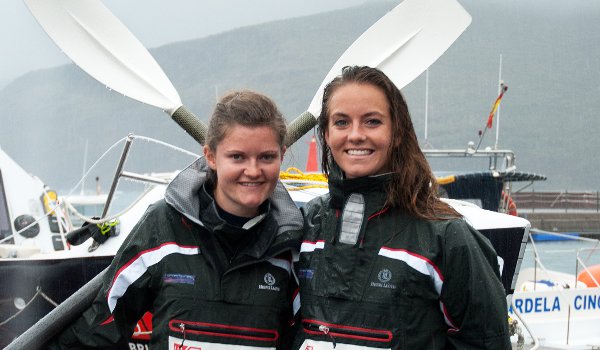 When the support vessel left and the women were told it would not be coming back, Hannah said her spirits “plummeted”.

“At that point they were quite down and we received a disturbing email from the girls,” said Mr Lawton.

“They were saying they have really had enough and the words from Hannah were ‘I need to get off this boat, I do not know how much more I can take’.”

The women were competing in the Talisker Whiskey Atlantic Challenge, an epic 3,000-mile voyage across the ocean.

But three months after they began the challenge, which they took on to raise funds for a cancer charity after their friend died from the disease, they were the only team left in the race.

As well as the setbacks, they had to deal with huge weight loss, worsening loneliness and living off powdered meals so unappealing they cannot stomach more than the bare minimum each day.

With 800 miles still to go, Hannah said they had only been able to keep going thanks to their stubbornness and their determination to do their late friend proud.

“Someone sent us a quote saying ‘perseverance is stubbornness with a purpose’ and rightly so,” she said.

“We both want to complete this no matter how hard it gets or how long it takes.

“We set out for a reason, to raise awareness and do it in memory of our friend, and that in itself is motivation because her battle was so much worse compared to ours and we want to do her proud.”

Timeline of the setback-ridden voyage

December 4, 2013: Within 20 minutes of setting out from the Spanish island of La Gomera, the boat’s GPS fails, forcing Hannah and Lauren to rely on navigational charts and a compass to plot their course across the ocean.

December 5: The boat’s automatic steering fails and the women have to use a foot-operated plate to steer.

January 6, 2014: The floorplate fails too, meaning the women can only steer by attaching a rope to the rudder. This requires both Hannah and Lauren to be on deck at all times, meaning they can no longer row around the clock in two-hour shifts.

January 19: A battery pack catches fire in the boat’s cabin and burns a hole through their £200 navigational charts before Hannah can throw it overboard. The women now have to use their phone to navigate their way to the Caribbean.

January 26: Disaster strikes as part of the boat’s rudder snaps.

January 27: The women attempt to fix the rudder, but lose an essential component in the sea. Despairing, they have to call for the help of a support yacht, which will take three weeks to reach them.

January 30: The boat capsizes while the girls are asleep in the cabin, leaving Lauren with a nasty head wound that Hannah has to glue back together. The boat’s rudder also breaks off as it capsizes.

February 20: The support yacht arrives with replacement rudder parts, but they do not fit the boat.

February 21: The support yacht leaves the women and they are told it will not be coming back. The women are asked if they want to retire, but they decide instead to continue.

February 24: The women begin their attempt to fix their rudder by using a hacksaw and drill to alter its shape, but have to wait for conditions to improve before they can try and fix it to the boat.

March 10: Hannah and Lauren accept that they will not be able to fix the rudder and call for a rescue vessel, abandoning their transatlantic voyage.

March 11: The women are picked up by a passing cargo ship en route to Canada.