A WEST Yorkshire couple have traced the history of their ancestor who fought in the Easter Rising and uncovered a fascinating story.

Robin Stocks and his wife Julia Earle were intrigued by family tales that Ms Earle’s father’s cousin had travelled from Manchester to fight in the Easter Rising in Dublin – but never had any proof it was true.

The Denby Dale-based couple set about tracing talented musician Willie ‘Liam’ Parr’s story but it was no easy task.

“My wife’s family always spoke about how he had been in the GPO during the Rising and how he had played the pipes for de Valera but we never knew what was true and what was legend,” Mr Stocks told The Irish Post.

The couple began to piece together what they could from Ms Earle’s memories and from speaking to other family members and after some research, discovered that Liam Parr was indeed involved in the Rising, at the age of 24.

Known by those around Manchester as Willlie Parr, the couple also found out that he went by the Irish name of Liam in Dublin. 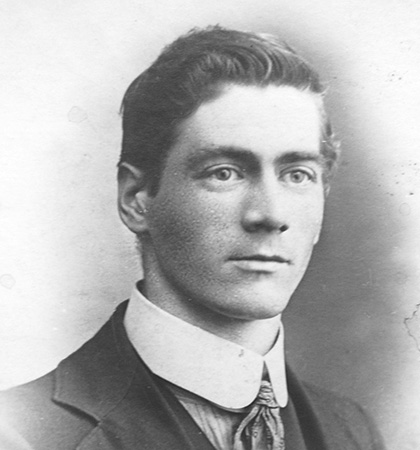 Liam Parr as a young man. Picture via Robin Stocks

After tracing his background through the Irish military pension records, they discovered that Liam had travelled to his native Dublin from Stockport, Manchester, in time for the Rising in 1916.

“He was born in Dublin and ended up living in Stockport with his parents,” Mr Stocks said.

“He travelled over for the Easter Rising and ended up in the Kimmage Garrison.”

The Kimmage Garrison was made up of about 90 men who had travelled over from England and Scotland to fight with Ireland against the British.

The majority of these men were Irish-born or of Irish extraction.

Liam was sent with a group to occupy a building on O’Connell Street (then Sackville Street) across from the GPO, where most of the warfare was taking place.

It was from here that the volunteers made major announcements about the Easter Rising, using Morse Code on the radio.

“We now know he was among those who retreated to the GPO and then to Moore Street,” Mr Stacks said.

After the Rising, Liam spent some time incarcerated in Frongoch prison camp in Wales.

And though they cannot prove it, Mr Stocks and his wife believe that Liam may have been one of the pipers leading Eamon de Valera on the first election trail of the Irish Republic.

“He was a talented piper and there’s a picture floating around of de Valera in Co. Clare and we can’t make out their faces but there’s a good chance one of them is Liam Parr,” he said.

He returned to his love of music after the War of Independence, marrying and settling in Manchester and going on to have three children.

But he never fully recovered from the Easter Rising, which took its toll on his health – and he passed away at the age of 42 in 1934.

The story led Mr Stocks to research other unknown faces of the Easter Rising, which he has documented in his new book Hidden Heroes of Easter Week – Memories of volunteers from England who joined the Easter Rising.

“What we want from this is to find other stories like Julia’s, that have been passed down through generations of families, before they are too diluted or forgotten altogether,” he said.

Have you a fascinating 1916 Rising story? Get in touch [email protected]