Dublin , Ireland - 24 October 2020; Béibhinn Parsons of Ireland is tackled by Aura Muzzo of Italy during the Women's Six Nations Rugby Championship match between Ireland and Italy at Energia Park in Dublin. Due to current restrictions laid down by the Irish government to prevent the spread of coronavirus and to adhere to social distancing regulations, all sports events in Ireland are currently held behind closed doors. (Photo By Brendan Moran/Sportsfile via Getty Images)

BÉIBHINN PARSONS tops the list of steller names for Ireland's opening round of World Rugby Seven Series in Dubai.

Parson's is climatised to 15s rugby, but has now joined up with Aiden McNulty's side for the event on the Persian Gulf coast.

Parson's became Ireland’s youngest ever Test player this year when she made her debut. The winger made her debut at just 16 and looks destined for a long international career. 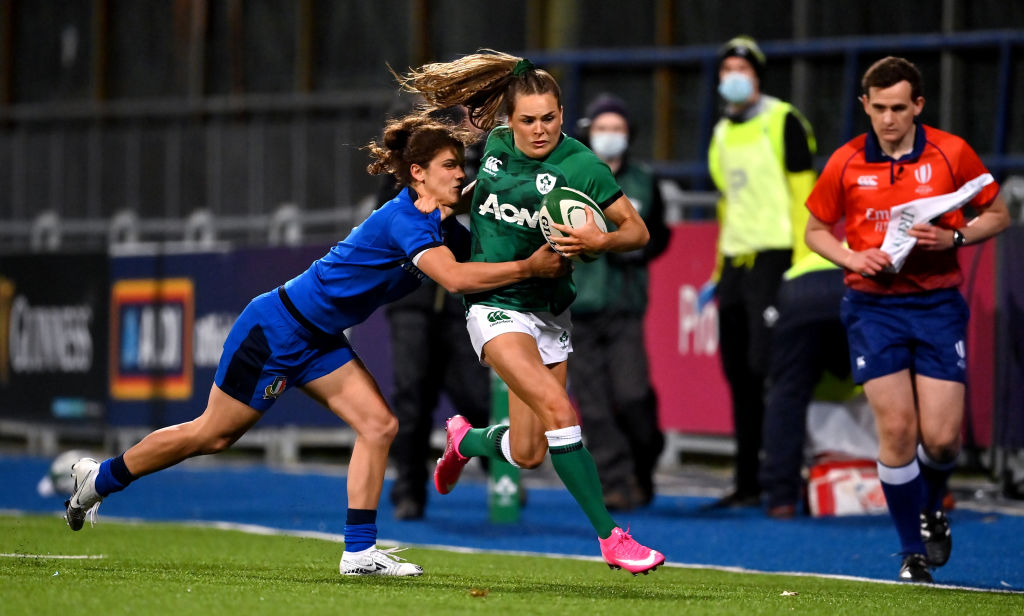 Parsons will also be joined by the likes of Eve Higgins, Leigh Murphy-Crowe,  Stacey Flood after the 15s side recently won back-to-back Tests against the USA and Japan.

Lucy Mulhall will captain the side as the Irish willl look to make their first World Series appearance since the Sydney leg of the tournament in February 2020.

Ireland kick off their 2022 campaign against Fiji in Pool B on Friday morning (5.22am Irish time).

Billy Dardis once again leads the men’s squad as they line up in the same tournament. Dardis is one of six Olympians to return to the fold in the side’s first action since their disappointing 10th-placed finish in Tokyo.

Jack Kelly, Mark Roche, Bryan Mollen, Hugo Lennox and Terry Kennedy are the other familiar faces from the Olympic squad.

Ireland got the men’s tournament up and running against South Africa on Friday morning (5.32am Irish time). Pool C clashes against Great Britain (9.46am Irish time) and Japan (12.08pm Irish time) follow on Friday.

Commenting ahead of the Dubai 7s, Mcnulty said:

“Both squads are extremely excited to be back in the World Series and Dubai is always a quality tournament and a great experience for the players.

“The teams will be very eager to perform well over the two weekends of competition and get off to a good start for the Series ahead.”

All matches can be streamed live on the World Rugby Sevens Series website.

What a try for Ireland from Beibhinn Parsons! #WALIRL pic.twitter.com/XoNsDB6uqw