Derek Pender of Bohemians celebrates after scoring his side's first goal with Luke Wade-Slater, left, during the SSE Airtricity League Premier Division match between Bohemians and Cork City at Dalymount Park in Dublin. (Photo By Stephen McCarthy/Sportsfile via Getty Images)

WITH Dundalk already crowned champions, and Shamrock Rovers guaranteed second place, the focus was on the chase for the remaining Europa League places in the SSE Airtricity League Premier Division at the weekend.

Friday night turned out to be a good night for Bohemians, who boosted their hopes of a third place finish with a 1-0 win over Cork City, while nearest rivals Derry City and St Patrick's Athletic both lost their respective games.

The win for Bohs over Cork City at Dalymount Park moves them two points ahead of Derry City, and five clear of St Patrick’s Athletic in fifth place in the race for the Europa League qualifying spots, although the goal that sealed the three points had an element of good fortune about it.

With Republic of Ireland boss Mick McCarthy watching on, the decisive moment came two minutes into the second half, in unexpected circumstances. 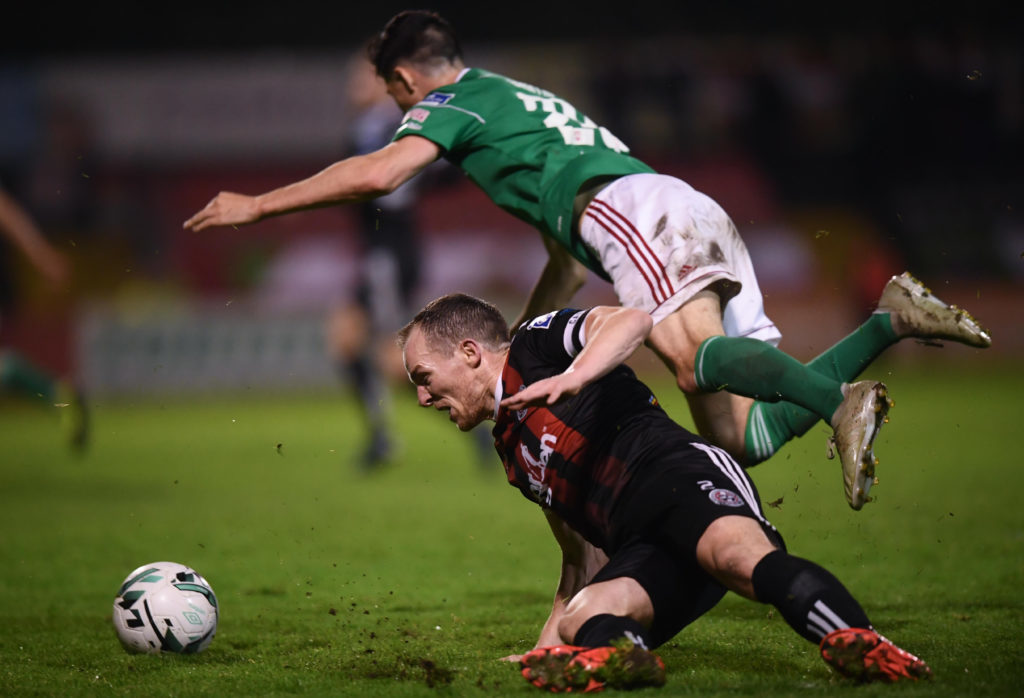 Derek Pender of Bohemians and Shane Griffin of Cork City during the SSE Airtricity League Premier Division match between Bohemians and Cork City at Dalymount Park in Dublin. (Photo By Stephen McCarthy/Sportsfile via Getty Images)

Bohs captain Derek Pender sent a cross into the box which was collected by City keeper Tadhg Ryan, but although the keeper caught the ball, as he fell to the ground he allowed the ball to squirm out of his grasp and over the line.

After that the game largely petered out with Bohs content to sit on their lead against a City side who have now failed to score in their last four games, and could still end up in the relegation play-off place.

Meanwhile, newly crowned champions Dundalk showed no sign of slowing up as they extended their unbeaten run in domestic competition to 31 games, with a 1-0 victory over Derry City at Oriel Park.

It was a result that dealt a blow to Derry's European hopes, and they will look back ruefully on a couple of crucial chances missed, the first one early in the game when captain Barry McNamee scuffed a shot in front of goal with just Gary Rogers to beat. 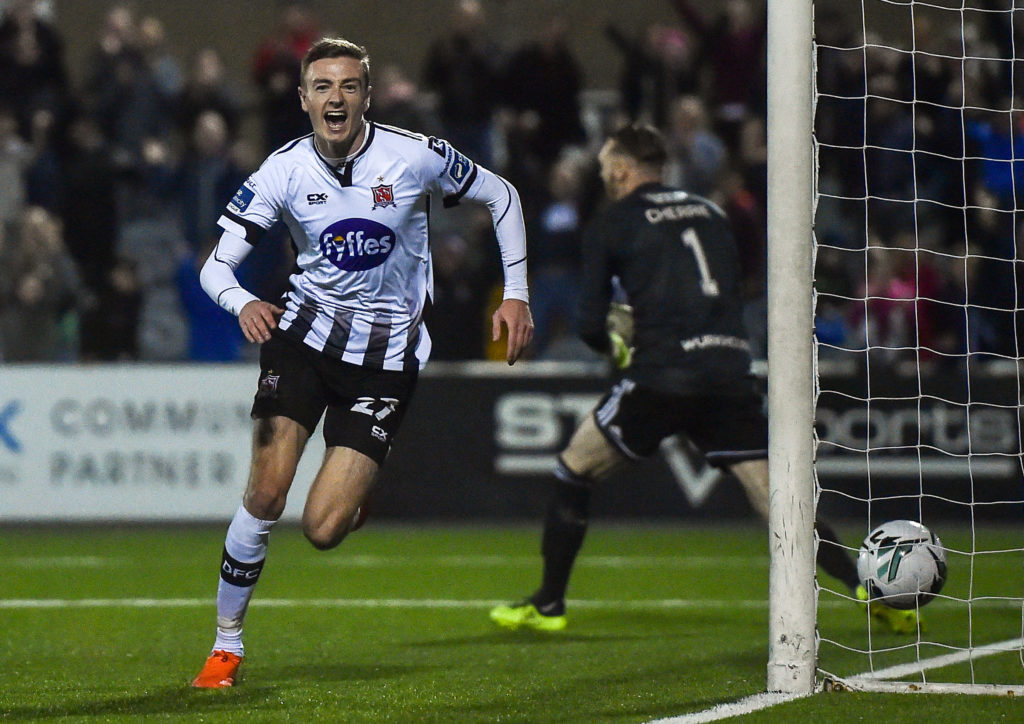 Dundalk broke the deadlock in the 64th minute, with substitute Lido Lotefa combining with Sean Gannon whose cross to the far post was rifled into the net at the far post by Daniel Kelly.

Derry were left rueing more misfortune 15 minutes from time, when substitute Grant Gillespie fired in a shot that beat Gary Rogers and hit the inside of the post before being cleared. However, Derry remain in the final Europa League place, three points ahead St Patrick's Athletic and with a far superior goal difference, after Pats lost 2-0 at home to Waterford.

Waterford were ahead from the fifth minute, the opener coming from the penalty spot after Dean Clarke tripped Rob Slevin in the box, and O’Connor smashed home the spot kick giving Barry Murphy in the Pats goal no chance.

The visitors always looked more threatening in the first half, and Pats head coach Stephen O’Donnell made two changes at half-time, bringing in Jake Walker and Glen McAuley for Mikey Drennan and Cian Coleman, in an attempt to freshen up the attack.

O'Connor at the double

It made little difference, however, and the Blues wrapped up the points with a second goal eight minutes from time, Michael O'Connor grabbing his second goal of the game with a powerful header from a Shane Duggan cross.

St Pats now face Bohemians and Derry City in their next two games, and the outcomes of both will go a long way to determining their European destiny before they round off the campaign with a trip to Dundalk.

With Shamrock Rovers guaranteed a second place finish and Sligo Rovers safe from relegation, there was only pride and points to play for in the clash between the sides at the Showgrounds on Saturday evening, which ended goalless.

Ireland manager McCarthy was in attendance for his second domestic game in 24 hours – the main reason for his visit likely to be a check on the form of Shamrock Rovers' Jack Byrne, who is in the Republic of Ireland squad for this week's internationals.

UCD up against it

Although visiting keeper Alan Mannus made some smart saves, it was the Dubliners who had the best chances, with Ronan Finn denied in a one-on-one with Sligo keeper Ed McGinty, before an Aaron Greene effort hit the crossbar after a swift counter attack.

At the other end of the table, UCD are seemingly doomed to certain relegation while Finn Harps look likely to end up in the relegation play-off spot after the sides shared a goalless draw in Ballybofey.

With three games to go, UCD are six points adrift of Harps, who had the better of the chances in the game but failed to make a breakthrough.

In the First Division promotion play-off first leg, Cabinteely were held to a 0-0 draw by Longford Town at Stradbrook, setting up an exciting second leg at the City Calling Stadium this Friday, with the winners progressing to face Drogheda United in the next play off round.