With two judges scoring the 10-round bout 96-94 in favour of the German, two-weight world champion Frampton was left baffled by the outcome having watched on from ringside.

“I thought he won it convincingly, to be honest, I had it seven rounds to three in Conrad’s favour,” Frampton told The Irish Post.

“I’m gutted for him, but I don’t think he lost that fight and it’s not the end of the world.”

Cummings and WBA (Super) featherweight champion Frampton share the same coach in Shane McGuigan, son of Barry, who held the same belt as ‘The Jackal’ just over 30 years ago. 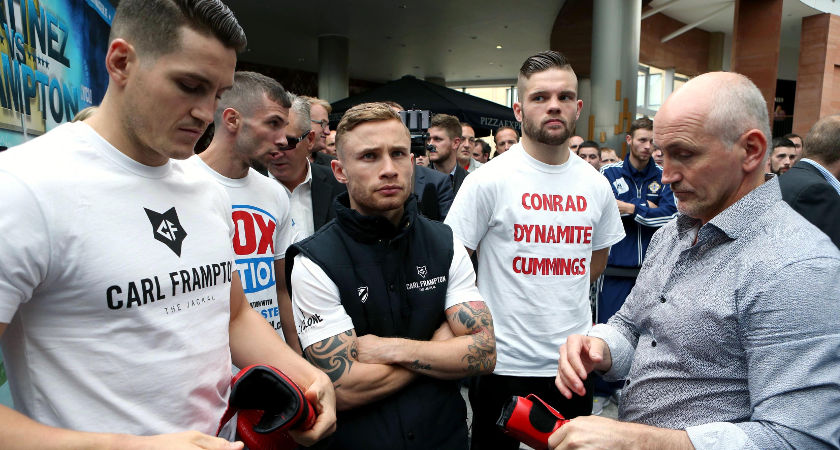 (L-R) Shane McGuigan, Carl Frampton, Conrad Cummings and Barry McGuigan [©INPHO/Presseye/Matt Mackey]
The defeat was the first in the coaching career of the promising Shane McGuigan, but Frampton believes it’s best for both he and Cummings to get back to work as soon as possible.

“Conrad’s a good fighter, people haven’t seen what I’ve seen in the gym with Shane, there’s a lot more to come,” said the Belfast brawler.

“I would like to see Conrad fight again pretty soon, so either forget about that fight or go for a re-match.

“If he gets a crack at the guy again, I think he wins it.”

Meanwhile, on the same card in Wembley Arena, Belfast welterweight Paddy Gallagher lost a decision in a barnstorming 10-round British title eliminator.

Reading-based Zimbabwean Tamuka Mucha scored a majority decision, with one judge marking it a draw, in what was arguably the fight of the night, which was headlined by George Groves’ unanimous decision win over Eduard Gutknecht.