We should have guessed that Barry McGuigan and Carl Frampton wouldn't have settled for bringing peace – albeit only ever on a temporary basis – to Northern Ireland. For this pair, no ambition can be too big.

So their next dream had to be the American one. "In boxing, it is the only place to go," said McGuigan, whose management and mentoring of Frampton all the way through from his first day as a pro to the moment he became world champion last September, has been far more than just a sub-plot to this overall narrative.

It isn't just that McGuigan, the former world featherweight champion, sees something of himself in Frampton. More to the point, everyone sees those evident parallels between the master and pupil, the clean-living sportsmen who fell in love with the girl from the other side of town, the accidental peacemakers who unite Catholic and Protestants.

Yet heart-warming, fairytale stories are all well and good – but boxing is a game of risk where supporters can be fooled once but never twice – so while it was fine matching Frampton with a decent, but to all an intents and purposes, limited opponent in Chris Avalos for the first defence of his world title last February, no one in Belfast is going to buy another ticket like that again any time soon.

Something different had to be sold so when the possibility of a showdown with Lancashire's Scott Quigg was discussed, the public were intrigued. In Quigg, they had a recognised name to look at, and a noisy young man who obligingly indulged in a spate of childish name-calling with Frampton, to listen to.

What fight fans really hope for, though, is for the talk to stop and the fights to happen. Quigg-Frampton was an obvious match-up which both boxers and the public wanted, but not for the first time in this sport, money and egos got in the way. 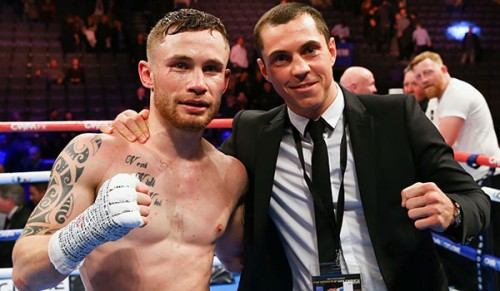 Quigg has attended a number of Frampton's fights

So instead of an Anglo-Irish showdown, this Saturday the man standing across the ring from Quigg in Manchester will be Kiko Martinez, the Spaniard who violently exposed Bernard Dunne's limitations inside a round way back in 2007, before becoming a world champion six years later, only for Frampton to take the crown away.

Billed as a world title fight – Quigg-Martinez, truth be known – is not much more than an eliminator in anyone else's language. Why else does the word 'interim' precede the name of the belt you are scrapping over?

Across the pond, meanwhile, Frampton takes on Alejandro Gonzalez Jr in El Paso, Texas, the second time he has defended the IBF version of the super-bantamweight title, a belt that in boxing's messed-up pecking order is held in relatively high esteem.

Yet the bigger story about this Saturday is not that Frampton is in Texas, nor that he is trying to outwit Gonzalez Jr, but that this is the first time he is doing business with Al Haymon.

While very little is known about Haymon – a private figure who is credited with finally making the Floyd Mayweather-Manny Pacquaio fight happen – in boxing circles, he has a reputation for being the big cheese, a latter day version of Don King, without the hair, manslaughter conviction or public persona.

At 59, Haymon has studiously built up a stable of 150 fighters, which dwarfs any of his rivals and makes Britain's biggest promotional names, Frank Warren and Eddie Hearn, look small-fry.

He's a divisive man – praised by those who work with him – disliked by many who don't. "Al Haymon is not Mother Teresa," Thomas Hauser, the respected boxing writer told the Washington Post earlier this year. "Al Haymon's goal isn't to save the sport. Al Haymon's goal is to make money for Al Haymon and his investors."

Disinterested in engaging in the wider debate about Haymon's morals or motives, Frampton and McGuigan view their match-up as a pathway to bigger fights and better paydays and a break from the seemingly endless rows with Hearn about dates with Quigg. "Al Haymon has a formidable reputation in boxing and has been the catalyst to securing the biggest fights in recent years," said Frampton.

Some, like Bob Arum, Pacquaio's promoter, also contend he is the one that blocked some of the bigger fights from happening. "There was always someone behind the curtain," said Arum in reference to how Mayweather-Pacquaio continued to suffer delay after delay from 2009 until this year.

Yet, in spite of Arum's reservations, McGuigan believes hooking up with Haymon is the best way to plot Frampton's career forward. He knows he has a fighter in an exciting division, one where he, Quigg, Guillermo Rigondeaux (who is also signed to Haymon) and Leo Santa Cruz remain unbeaten.

And McGuigan also knows that fighters like his promotional model, where they are afforded a specified cut of every ticket and pay-per-view sale. "The practice works for me and works for Al," said Mayweather.

Can it work for McGuigan and Frampton too? No doubt, but Haymon's preferred practice of pitting fighters from within his own stable against one another isn't everyone's favourite policy. "It's silly because some matches that could easily be made weren't being made . . . King and I were tremendous rivals and competitors," Arum said. "But that never stopped us from working together to put on a big fight."

However, his clients love him for it – with Peter Quillin, the middleweight who drew with Andy Lee earlier this year, saying: "Fighters are mistreated, misused, and abused all the time. That's why people thank Al Haymon so much because he's able to know what we're worth as fighters."

Having seen Frampton sell out shows in Belfast – and then draw a huge percentage share of the television audience when his fight with Alvoles was screened on ITV – Haymon clearly saw the potential value of adding Frampton to his team.

But will Frampton benefit? On the face of it, you'd have to say yes, especially in light of the deal Haymon struck earlier this year when he signed contracts with NBC, Spike TV, ESPN and CBS earlier this year to bring boxing back to terrestrial TV in America.

In time, Haymon could end up controlling the entire sport, which essentially could bring an end to a scenario where there are four, and sometimes, five world champions in each division.

That's for another day. For now, it'll be fascinating to watch how this unlikely marriage between a 28-year-old fighter from Tiger's Bay and a 59-year-old businessman from New York, will unfold.

As chaperon, McGuigan will be keeping a close eye on things. After all it is 29 years since he took a similar step outside his comfort zone as a boxer, arriving in Las Vegas to share a bill with Tommy Hearns and Roberto Duran.

That trip ended in him losing his title to Steve Cruz and his friendship with Barney Eastwood. He'll hope for a better stay this time.