DESPAIR is the only word that describes the way my wife feels when I start talking London GAA.

This morning as she walked into my office, to see me surrounded by open boxes containing years’ worth of GAA programmes from events long-since forgotten, despair didn’t even begin to cover her reaction.

Last Christmas she suggested buying me a coat stand, with her justification being that given that I was such an anorak, that I might as well have somewhere to hang out — cruel words.

Today though I had a ready answer to her cries of frustration, for on this occasion I was researching, looking for a programme that I knew was buried deep within the treasure trove that details the Sundays of my life in London.

The programme in question was from the 1990 Senior Hurling Final between St Gabriels and Desmonds, two of the giants of the game for many years.

Many newcomers to the capital may ask who these Desmonds are, and it is a valid question.

The Desmonds are no more. Their proud history has partially disappeared too, with what little remains of it to be found somewhere in the DNA of the Kilburn Gaels club.

The reason why I was searching for that specific programme was because of a small article that I remember appearing in it.

This piece focused on the GAA overseas and it detailed the number of clubs in the various overseas units at that time. London it stated, boasted 65 football and hurling clubs in 1990.

Now of course we know that since then the savage claws of the infamous Celtic Tiger ripped a hole through the belly of the Association in Britain, and those of us who were present in London throughout the 1990s and 2000s will know that we spent as much time attending going-away parties as we did at training.

The knock-on effect of that exodus on the GAA in London was massive, as firstly there was the immediate loss of players and then there was the loss of future mentors and club stalwarts; an aspect that is still haunting some clubs long after the Tiger has stopped gouging at the guts of the Gaels in London.

As I rummaged through the boxes of programmes I have stashed away, I started to make a list of what could be best termed ‘the disappeared’; those clubs that are no longer with us.

I listed 29 football teams that vanished from the landscape in that time, and given that currently there are only 23 football clubs operating in London, then it really does demonstrate very keenly just how much downsizing has taken place.

The disappearance of these clubs has taken several forms. There were some hurling clubs, like the Desmonds, Clann na Gael, Sean Treacys and Fr Murphys who fielded football teams, but eventually had to concede defeat in their battle for a dual identity.

Then there were the clubs who became too weak to survive on their own. A typical case was in north London where Shannon Rovers and the not-long-conceived Sam Maguires joined forces, to form the clumsily-named Shannon Rovers/Sam Maguires, before that amalgamation then hooked up with St Theresas to create what we now know as the North London Shamrocks.

Western Exiles and the always-intimidating Irish-speaking Connemara brigade better known as South & O’Hanlon were also forced to merge together, but it was a short-lived union and that new entity also disappeared.

One of the great tragedies of this period was the loss of the Geraldines, a team that proudly boasted on its advertisements that it was the club that Michael Collins had played for.

To think that such history could vanish from the face of the GAA scene in London is saddening to say the least, but those were the times we were living in. 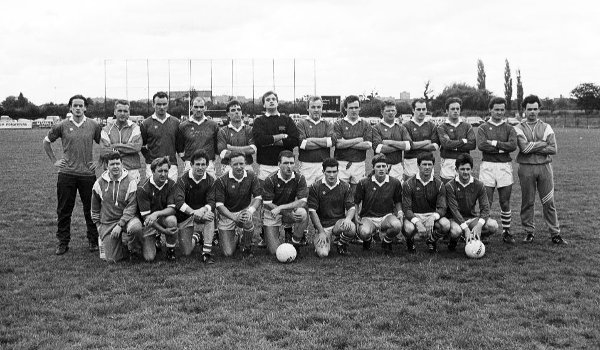 By the early 2000s the scene had shrunk to such a degree that a decent-sized blanket could have covered the area of west London within which half the teams in the city were operating.

As already stated, north London had been decimated, while the south hadn’t faired much better, with clubs like St Michaels and St Annes both biting the reality bullet.

Where once New Eltham in south-east London had been the seat of the GAA kings of London, now it was nothing more than a nasty word, used-only during those all-too-frequent in-camera County Board meetings.

The backdrop to the history of current county champions Kingdom Kerry Gaels provides a fascinating study into how clubs splintered into various guises during the good times, only to have to recoil into their former, if somewhat modified shell when times got tricky.

The Kingdom club reigned supreme in London football throughout the 1970s and 1980s. They were the untouchables. In the 1970s they won six Championships on the trot, as well as landing an All Ireland 7s title into the bargain.

They really were monarchs of all they surveyed. The story wasn’t all that dissimilar in the 1980s with a further four senior crowns being added to their haul.

However, somewhere in the middle of all that glory and trophy grabbing, a split appeared in the club, and from those internal wranglings the Kerry Gaels club emerged. Within a very short time, this new club also became a significant player in London football.

However, the splitting wasn’t over at that, and from the Kerry Gaels another club emerged (albeit very briefly), the O’Connell Boys.

So from the one entity that we had known as the all-conquering Kingdom, suddenly there were three clubs in existence.

That said though, no sooner had the dividing been completed, than the crumbling started as O’Connell Boys vanished almost as quickly as they had appeared.

Then bizarrely, in the late 1990s, the two sworn enemies — Kingdom and Kerry Gaels — began to discuss a reconciliation. When this reunion finally took place at the start of the century, most imagined a Goliath of the GAA in London had been re-born.

Despite the emergence from the rubble of this new club, one regrettable fact remained: The Kingdom was gone, to be replaced by another of those awkward compromise identities that have to be settled on — this time Kingdom Kerry Gaels.

For me, the loss of the Kingdom was a sad day for London football and it provided a perfect testimony to just how savage a mauling the GAA in London had taken throughout the second half of the 1990s especially.

That sorrow was compounded when around about the same time, another iconic name, that of Naomh Mhuire, a team that had contested a senior county final less than 10 years earlier, was also lowered slowly into its final resting place.

The list of other clubs to have surfaced and then vanished in London football in this period goes on, with experiments and initiatives like Hendon Gaels, Four Provinces, and the hugely committed Jersey Irish also featuring on the list of the disappeared and departed.

While some new names have emerged such as Crawley/Brighton Gaels, Eire Og and the highly successful Fulham Irish, for those of us who have been around long enough, their emergence doesn’t even start to mask the scars left by the ravages of the Celtic Tiger years.

The GAA in London may never re-emerge as the sort of super-power it was in the past. What impressed me so much about that list I read in the programme in 1990 was that it showed that there were more clubs in London than there were in my native Tyrone. Given that Tyrone has more clubs than any other county in Ulster, that was a pretty impressive statistic for London to revel in.

On the plus side, the survival of so many of the smaller clubs in London is a real tribute to the dedication and commitment of the die-hards who run each of these units. No doubt there were times when it would have been easier for them to just raise the white flag.

There will of course be new clubs to emerge in the future, but common sense has to be applied to the formation of any club and it can never be conceived to the detriment of another already existing entity.

There will always be small groups of people who believe that they can do it better than the people they are serving at that time; that fact is as true in sport as it is in business.

All we can hope for though is that those Gaels who do take on the challenge can actually deliver on that gut feeling, so that whatever new club they create can avoid the already overflowing graveyard containing former greats of the GAA in London.

Thrown from the Wolves