Shamrock Rovers will face Dundalk in the Extra.ie FAI Cup Final at the Aviva Stadium on Sunday November 3, after both emerged victorious from their respective semi-finals at the weekend.

Rovers won 2-0 in the Dublin derby clash against Bohemians on Friday night thanks to goals from Graham Burke and Aaron Greene while the The Lilywhites needed an 89th minute winner from Michael Duffy to edge a 1-0 win against Sligo Rovers on Sunday.

The last team before Dundalk to reach five finals in a row was Shamrock Rovers in 1968, and it is they who will stand in the way of the Lilywhites completing a domestic treble.

In an eagerly awaited Dublin derby between the two local rivals, it seemed destined to be Rovers' night almost from the off. 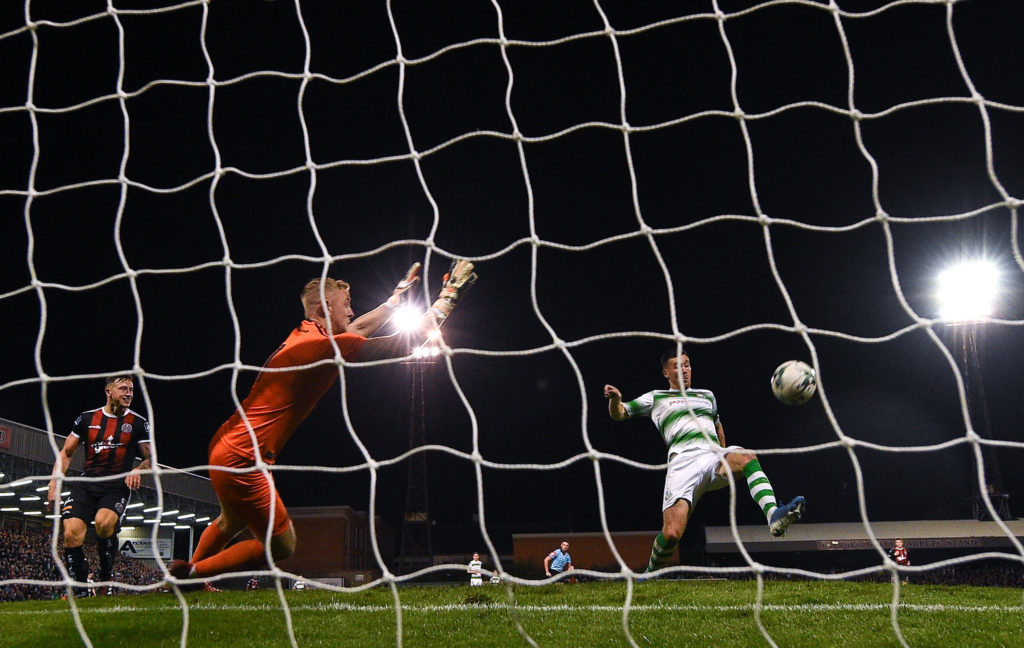 Aaron Greene of Shamrock Rovers shoots to score his side's second goal past James Talbot of Bohemians during the Extra.ie FAI Cup Semi-Final match between Bohemians and Shamrock Rovers at Dalymount Park in Dublin. (Photo By Seb Daly/Sportsfile via Getty Images)

They created the first chance of the game after just 40 seconds, with Greene testing James Talbot in the Bohs goal, and Greene was also involved in a controversial moment that led to Rovers opening the scoring after just five minutes.

Greene won a corner on the right, but television replays clearly showed that Greene had the final touch before the ball went out of play, with Bohs' James Finnerty playing the ball against his shin.

However, assistant referee Wayne McDonnell signalled for a corner kick, and when Jack Byrne flighted the ball to the near post, Graham Burke glanced a header past Talbot from close range to put the Hoops ahead.

Bohs had the better of possession during the first half without threatening Alan Mannus in the Rovers goal, but after the break Rovers took control, closing the game down and picking their moments to hit on the counter attack.

With 20 minutes remaining, an incredible clearance from Bohs Paddy Kirk from under his own crossbar kept his side in the game, when he got back to thwart an effort from Graham Burke that was heading for the net.

But Rovers were in command and always looked likely to add to their lead, and once Bohs' Danny Mandroiu was shown a straight red card for a wild challenge on Sean Kavanagh, there was little doubt about the outcome.

With 12 minutes left Rovers thought they had doubled their lead when Joey O'Brien tapped home a Jack Byrne cross only to see it ruled out for offside, but within two minutes a trip to the Aviva was secured with a second goal.

Ronan Finn broke down the right and fired a low cross into the six yard box, and Aaron Greene timed his run perfectly to the back post to finish from close range.

Unfortunately the game then had to be stopped after some Bohemians fans encroached onto the pitch, and although play resumed after around a minute, there were further scuffles on the terraces as the game drew to a close.

But it was the Rovers supporters who were celebrating at the end, and can now look forward to their first cup final trip to the Aviva Stadium since 2010.

For Dundalk, their fifth successive final offers the opportunity to complete a domestic treble, while Rovers now have the chance to lift the famous old trophy for the first time since 1987.

However, although Rovers were always in control of their game at Dalymount Park after taking an early lead, Dundalk were made to work hard for their narrow win against a determined Sligo Rovers side backed by a strong home support. 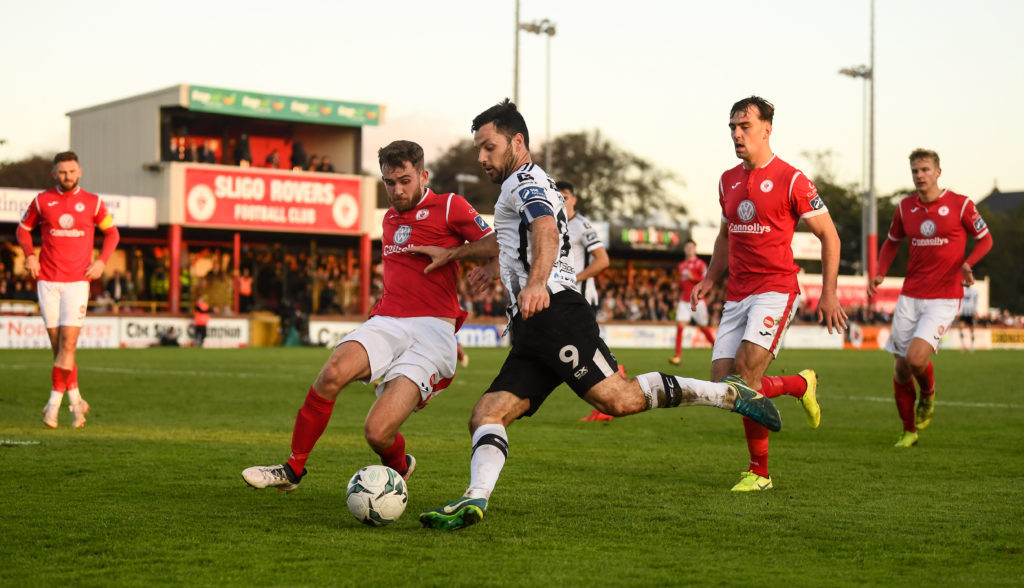 Patrick Hoban of Dundalk in action against Lewis Banks of Sligo Rovers during the Extra.ie FAI Cup Semi-Final match between Sligo Rovers and Dundalk at The Showgrounds in Sligo. (Photo By Stephen McCarthy/Sportsfile via Getty Images)

A keenly contested first half at the Showgrounds saw play flow from end to end but neither side could break the deadlock, and both sides lost a key player through injury with Sligo' s Romeo Parkes limping out of the action after just ten minutes, and Dundalk's Patrick McEleney going off just before the half hour with a hamstring problem.

The main first half talking point arose in the 23rd minute when Sligo's Ronan Coughlan went down in the box under a challenge from Daniel Cleary, and although the referee had a good look he ruled there had been no foul.

However, after the break Dundalk began to turn the screw and as the game wore on, they began to dominate. Pat Hoban and Jamie McGrath both had chances, some desperate Sligo defending kept out a series of attacks and corner kicks, and six minutes from time Sligo had a major let off when Sean Murray blasted the ball over the bar from six yards out after a Michael Duffy shot was deflected into his path.

But just as it looked as if Sligo would hold out for a replay next week, the home crowd were silenced by Dundalk's 89th minute winner.

Sean Murray's free kick was floated into the box, and Georgie Kelly won the aerial battle to nod the ball back into the path of Michael Duffy, who struck a shot on the volley past Ed McGinty in the Rovers goal to secure victory for Dundalk and their place in the final.

There was also one game in the SSE Airtricity League Premier Division on Friday evening, and to round off a bad night for Bohemians, Derry City replaced them in third place in the table and moved one point clear with a comfortable 4-0 victory over Cork City at the Ryan McBride Brandywell Stadium.

The foundations for the win were laid with two goals in the final four minutes of the first half, with Eoghan Toal opening the scoring with a close range finish off an Ally Gilchrist header.  On the stroke of half time, Cork's Conor McCormack gifted the ball to Junior Ogedi-Uzokwe on the edge of the penalty area, and the Derry striker played a one-two with Ciaran Harkin before curling a beautifully placed shot into the net.

The big striker also had a hand in the third goal, when his header was pushed out by Cork keeper Ryan but rebounded off Colm Horgan into his own net, and he rounded off a good night's work for both himself and his side when he added his second of the night and City's fourth deep into stoppage time.