DUNDALK are the SSE Airtricity League Premier Division champions for the third season in a row, after a 2-1 win over Bohemians at Oriel Park on Sunday night.

Goals from defenders Andy Boyle and Brian Gartland sealed victory in front of Dundalk's biggest league attendance of the season, and the Lilywhites are now the fourth team in League of Ireland history to win the title three times in succession, following in the footsteps of Cork United (1941-3), Waterford (1968-70) and Shamrock Rovers (1984-86).

Rovers also won the title in 1987 too, and at the moment few would bet against this Dundalk side, widely acclaimed as one of the best ever to grace the domestic league, equalling that 30 year old record.

Dundalk went into the game knowing that they needed one win from their last three league games to clinch the title, but speaking to RTÉ after the game manager Stephen Kenny said they had been keen to clinch it as soon as possible.

"The air of expectation was there," he said. "You don't want to not win it and drag it on, so we were keen to try and get it won tonight. The players were very tired after Thursday night and the run of games, and it wasn't our best performance but that doesn't matter.

"I can't praise the players highly enough they have been magnificent with the run of games we have had, it's unprecedented. It's just tremendous to win one (title), from where we came from. To win three in a row has been something special." 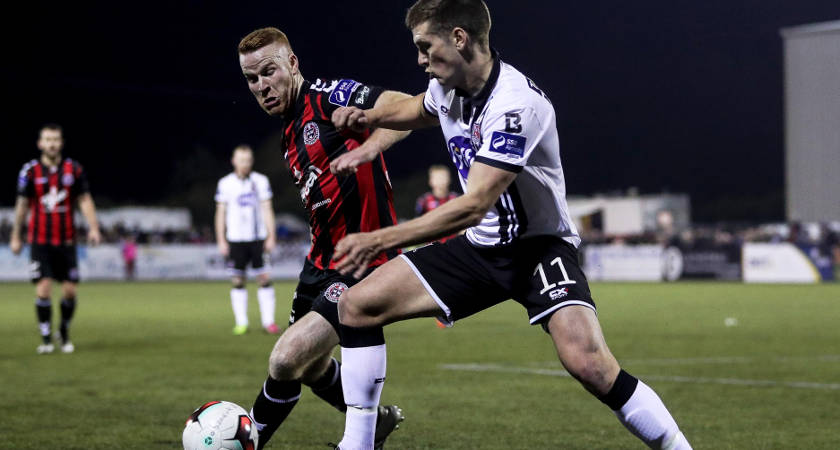 Dundalk's Patrick McEleney with Lorcan Fitzgerald of Bohemians [©INPHO/Tommy Dickson]
Oriel Park was bouncing with noise and expectancy from the start, and although Bohemians began the game well, Dundalk made the breakthrough the home support were looking for after 15 minutes, when Patrick McEleney sent in a left wing corner that Andy Boyle volleyed in from close range to send the home fans wild.

They were silenced, however, just before the half hour when Bohs equalised with a controversial penalty.

Referee Neil Doyle ruled that Keith Buckley had been caught by Ronan Finn inside the box, but television replays showed that there had been no contact from the Dundalk player.

But a penalty was awarded and Mark Quigley sent Gary Rogers the wrong way from the spot to bring his side level.

The victory was sealed in the 63rd minute, when a long Ronan Finn free-kick from the halfway found Dane Massey, and his header across goal was turned in by Brian Gartland for his seventh, and most memorable, goal of the season.

With the title in the bag, Dundalk will complete their league programme with two games this week, but their busy schedule continues the week after, with a trip to Zenit St Petersburg in the Europa League followed by the FAI Cup Final at the Aviva Stadium on November 6, where they will look to complete a league and cup double for the second season in a row when they face Cork City.