The FAI have hit back in the row with SIPTU, the Irish trade union which claimed the organisation could be insolvent within a matter of weeks.

SIPTU released a statement on Wednesday expressing concern for their members and the ‘extremely precarious’ financial situation the FAI find themselves in.

The crisis-hit organisation have been under the spotlight since details emerged of then-chief executive John Delaney’s loan to the association back in 2017.

SIPTU Sport Sector Organiser, Denis Hynes, said: “We have received information that the FAI is in an extremely precarious financial situation with a threat of the organisation becoming insolvent in only a matter of weeks. This has caused great concern to our members who are employed by the FAI. 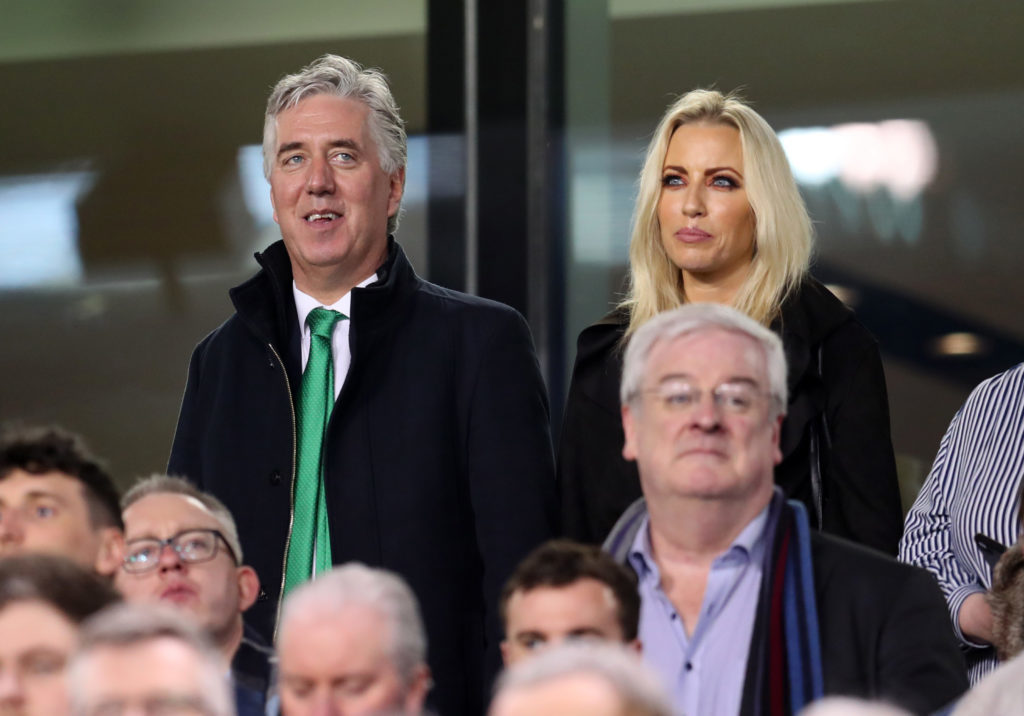 John Delaney  and his partner Emma English during the 2020 UEFA European Championships group D qualifying match between Republic of Ireland and Georgia at Aviva Stadium on March 26, 2019 in Dublin, Ireland. (Photo by Catherine Ivill/Getty Images)

“While we fully understand that under Fifa rules, the government does not have a role in the running of the organisation we believe that with up to 200 jobs at risk the situation is one that requires the direct attention of the Minister for Transport, Tourism and Sport, Shane Ross,” they said on Wednesday.

However the FAI dismissed SIPTU’s claims and say they are “unfounded. The association are are adamant that with Uefa’s support, there is no immediate threat to the FAI’s operations or imminent job losses.

“The Board of the Football Association of Ireland is both shocked and disappointed by the statement from SIPTU and their unfounded claims regarding the FAI’s financial situation,” a spokesperson said.

“At a positive meeting of the FAI Council this afternoon, President Donal Conway outlined how the FAI had recently engaged with UEFA when assurances were given regarding their support for the Association.

President Conway said: “As I outlined to our Council meeting, we recently met with UEFA President Aleksander Ceferin and Director of National Associations Zoran Lakovic. At that meeting in Nyon, they assured us of the full support of UEFA for the FAI as we go through our current processes.

“UEFA’s support will ensure the continued viability of the Football Association of Ireland and there is no threat to FAI Operations or to FAI staff.”

Sport Ireland suspended state funding to the FAI given their failure to disclose the loan in 2017.

Sport Ireland CEO John Treacy has said state funding will only be restored when they are satisfied by reforms to the FAI’s governance. At present, FAI staff are working with three Sport Ireland nominees on a governance review committee.

They are expected to make their recommendations at the end of June, ahead of the FAI's next AGM in July.