A postcard from Chicago: Fate determined that Ireland would have their moment

AFTER a week of unforgettable images, when Chicago saw the end of two sporting droughts lasting a combined 219 years, one memory stands out more than any other.

And that took place in the underbelly of this imposing Soldier Field stadium, where one hour before, Ireland had made history.

Here, a walkway formed between the locker rooms and the team bus – yet America’s idea of a walkway is Ireland’s idea of a car park. Everything over here is built on a grander scale, even the concrete paths running underneath the main stand of a stadium.

And this was where Rob Kearney was talking when, over his shoulder, the touring party of 30 All Black players filed past him, making their way back to the team hotel. Marching slowly, dressed in black suits, white shirts and black ties, it looked like a funereal scene minus the coffin.

And in a sporting sense, it was. They weren’t just stung by Ireland’s surprising victory in this unusual rugby setting. These guys were distraught. “Losing hurts,” their coach, Steve Hansen, said. “But in life, you’ve got to have a perspective. Ireland deserved their win. It’s been coming for some time. Our job now is to learn from it. That’s how you improve as players and as people.”

And Ireland are waiting for that backlash. "We're under no illusions what's coming back,” Kearney said. “They’re an unbelievable side.” And one who Ireland will face again on Saturday week, when revenge will be uppermost in New Zealand minds. Any doubts about that were dispersed within minutes of the final whistle.

As Ireland’s players – justifiably – celebrated their capture of a scalp they have been chasing since 1905, the unused squad members in the New Zealand party underwent an intense training session, ignorant of what was going around them. Those contrasting scenes – one team waving flags and saluting supporters – while the other engaged in a ball-retention session underlined precisely where each of them stands in the rugby world. 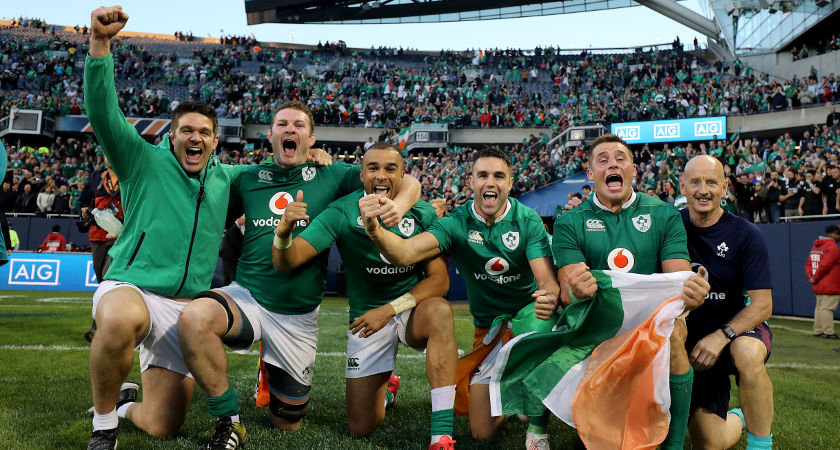 Ireland's Billy Holland, Donnacha Ryan, Simon Zebo, Conor Murray and CJ Stander celebrate winning [©INPHO/Dan Sheridan]
For Ireland, this was an end point – a full stop to a misery that began in 1905 – whereas for the All Blacks, the final whistle acted as a starting point. They were already thinking of the road ahead, the next game. But the Irish players weren’t at that point yet. How could they be? “All week we’d built ourselves up to try and achieve something that had never been done before,” Tadhg Furlong, their prop forward said.

Emotion was in his face, mist in his eyes. Intelligently he placed this victory in a familial, parochial and national context. “Looking into those stands,” Furlong said, “I just thought about all those Irish people who came to see us, all those people who helped me get to this stage in my career. I thought about where I’m from in Wexford, my town, my local rugby club, my family. It’s such a proud thing, this. I’m so proud to be Irish.”

They were sentiments that weren’t just echoed around the dressing room – but also on the streets of Chicago that Saturday night, where the familiar accents of home were audible in the restaurants and bars of a town that has been partying since the previous Wednesday, when the Cubs, the city’s underachieving baseball team, had finally laid a ghost to rest, winning their first World Series since 1908.

Fate determined then, that Ireland would have their moment too. Yet the remarkable aspect to all of this is that Chicago hosted not just a rugby game last week. The week began with a NFL game involving the Bears on Monday.

Tuesday was Game Six of the World Series, Wednesday Game Seven. Each night the bars were packed before the patrons took a break on Thursday, even though the Chicago Black Hawks had a regular season NHL game. Friday brought five million Cubs fans onto the streets for the homecoming parade as well as bringing the New York Knicks into town for a date with the Bulls, as basketball entered the diary.

And yet while the Cubs dominated the week – rugby came an impressive second in terms of the visible impact it had on the city as, by the weekend, green shirts seemed to pop up everywhere. 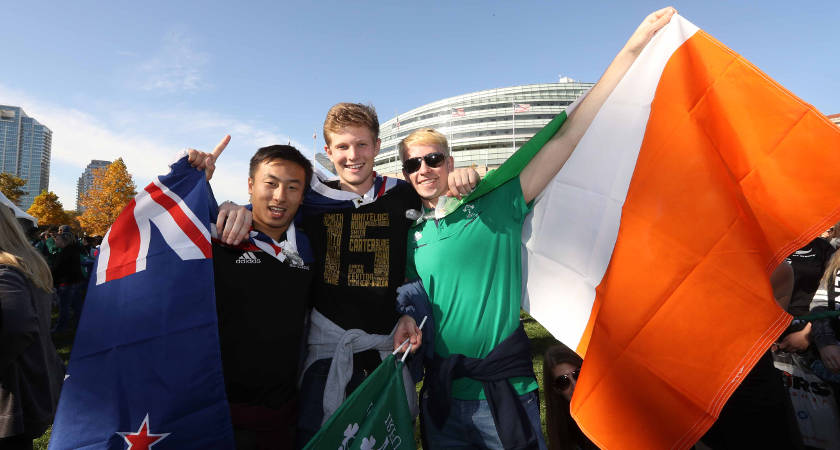 Fans of both teams in harmony before the match outside Soldier Field [©INPHO/Billy Stickland]
“Wherever we go, we just get this unbelievable support,” Schmidt said. Tellingly he didn’t partake in the lap of honour, preferring instead to keep a low profile, standing by other staff members in the middle of the field, watching it all unfold.

Later he jokingly talked about relaxing the drinking ban to allow the players celebrate – knowing full well that achievements have to be marked. Yet his nature is to never stop but instead to see the next step that has to be taken. “We’re disappointed with a couple of the tries we gave up,” he said amid a thousand other words which were wholly positive and respectful of his team’s display.

Yet, in reference to the point Rory Best made the day before the game, he lives in a world where if you don’t look forward, you get left behind. More than anyone, Schmidt knows a blacklash is on the way.

“I certainly would sympathise a bit with the All Blacks because that wasn't the All Black team that we have seen throughout the Rugby Championship (when they secured bonus point victories in each game) and I've no doubt what will happen when Brodie Rettallick is fit to contest our next match in Dublin a couple of weeks from now,” he said.

By then, though, Sean O’Brien, Peter O’Mahony and Keith Earls will also be available. No longer are Ireland reliant on the same familiar faces. They have depth now as well as quality, plus they have an All Black scalp permanently pencilled into the history books.

Chicago was their kind of town.