THE father of a former London hurling star who was found dead earlier this summer has spoken for the first time about the agonising loss of his son a week after the GAA met with a player support organisation.

Sean Quinn, 33, was found dead in his Belfast home in July and just weeks ago the GAA community was devastated by the death of former Galway hurler Niall Donohue.

“I feel if there are people there you can go and talk to that would be a good thing,” Joe Quinn told The Irish Post.

Mental health issues have risen in profile over the past 12 months through the close, but far-reaching, community network that defines the GAA at home and abroad.

Sean Quinn won a Nicky Rackard Cup with London in 2005 and an All-Ireland Intermediate title with city club Robert Emmetts in Croke Park in 2007 – the first overseas GAA club to ever reach such heights.

His death came four months after former Fulham Irish player Diarmuid Maher, 29, was found dead in his home in Waterford.

Following the passing of Niall Donohue, Britain’s top hurling club St Gabriels called on the Association to further raise the profile of mental health support services for players. In 2010, St Gabriels suffered the loss of hurler Enda Holland from Galway.

What follows is the full interview with Joe Quinn.....

IT’S Wednesday in Belfast and Joe Quinn is talking about a game the hurling clubs of Gort na Móna and London’s Robert Emmetts are planning to hold in his son’s memory.

There’s some comfort in the gesture; some life energy in the planning but life since Sean’s passing four months ago has been very difficult.

Most Sunday morning’s Joe takes his grandchildren up to the local GAA pitches of Gort na Móna to watch the games and he thinks about his son. He wishes Sean was there. 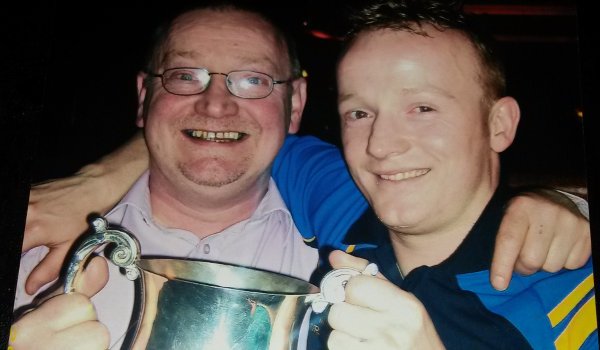 Joe and the late Sean Quinn

Sean Quinn was 33 years old when he died, but a lot of those years passed quickly and it only feels like an eye-blink for Joe since Sean announced his interest in the sports of Gaelic games.

“He was seven-years-old,” says Joe. “There was an under 12s match and we were one player short. So we got Sean in to play full-forward.

"I remember there was a big full back and he said: ‘I’m not marking him. He’s only a child.’ Then Sean goes on to score three goals and three points off him.”

He laughs at the memory and celebrates others because as a parent, Sean gave Joe Quinn plenty to celebrate.

His son played underage for Antrim as a minor and won a senior footballer of the year award when he wasn’t yet a senior player in Belfast.

Mention the name Sean Quinn around London GAA circles and people will acknowledge the lean, competitive, skillful hurler who helped the Exiles win the inaugural Nicky Rackard Cup with London in Croke Park in 2005.

He went a step further with the city-based club Robert Emmetts who became the first ever hurling team overseas to win an All-Ireland club title, again it was Croke Park and the year was 2007.

“I have all his jerseys and his medals,” says his father quietly. “That was a great day...that was the biggest day, winning the All-Ireland medal. That was a big victory for the family.”

After leaving an indelible mark on London’s Irish landscape, Sean Quinn returned to live in Belfast where he continued his involvement in Gaelic games with Gort na Móna both as a player and as a coach.

“When he came back he started playing senior hurling here with the club and he looked after the camogie and then he was training the under 8s and under 10s. He was always involved in it.”

Joe explains that Sean was still involved in GAA up to the night he died. Life seemed normal, Sean seemed normal. Outwardly at least, everything felt alright.

“The night it happened it was July 12 and it was me, Sean and his mother and we were sitting in the kitchen having a beer watching TV and having a bit of craic, it was holiday season here,” Joe says. 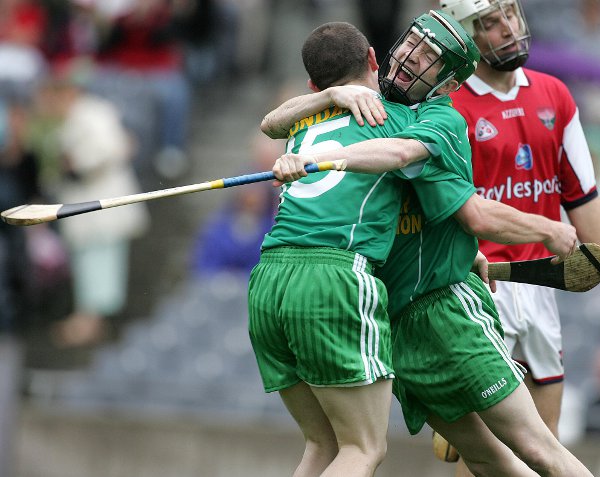 “That morning me and him and the grandchildren went up to Gort na Móna fun day, we had a fun day and we came back, got a carry out, said we’d have a few beers and a laugh and he never once looked like he was going to kill himself. That’s the part I still can’t get over.

“It’s unbelievable, sitting with him that night and seeing him the next morning — dead, it’s still something I can’t get my head around.”

The local community and the GAA community rallied around the Quinns — “The support they gave us was unbelievable. We can never pay them back for what they’ve done for us. Especially the community in Belfast” — but the grief and the unanswered questions remain.

The seriousness of the problem of suicide in Ireland means the reminders are constant and jolting.

“Niall Donohue... when he died it just brought everything back to us,” Joe says in reference to the Galway senior hurler who was found dead last month.

“The suicide here in Belfast; it’s unbelievable how many people do it. It feels like one every day.”

Joe says he has started to attend counselling and admitted that it is something he would never have considered before his son’s death.

“Suicide awareness set it up,” he says. “There’s an office down the Falls Road here in Belfast and it was set up for people who committed suicide. I thought I was going nuts. I just rang them and asked could I come down and they said yeah.”

“I’m not ashamed of it, anybody I meet and they say to me how are you going? I tell them I’m going to counselling and getting help.”

Reflecting on moves within the GAA to try and provide more support for those suffering to cope with mental health issues he says: “If someone comes up with an idea, I think we should go ahead and try it and see how it goes.

"I feel if there are people there you can go and talk to if anything happens that would be a good thing. We have a wee thing every Sunday morning in the GAA club with my grandson and I think to myself: ‘I wish Sean was here to do this.’”