The sky's the limit for rugby union's American dream

WHEN former London Irish chairman David Fitzgerald sadly passed away last month, talk of the legacy he will ultimately leave behind largely surrounded his influence on the club’s healthy state of youth development.

Fitzgerald spent over four decades at the club, captained the team for two seasons and went on to take up coaching. From there, he nurtured a group of Under-6 boys who are now considered to be one of England’s best Under-16 sides.

The squad, which Fitzgerald’s son Tom is part of, once went a remarkable four seasons without defeat and gained a memorable win over Blackrock College during their 2012 Tour to Dublin, while they have been crowned Surrey Champions in all but one season since they were Under-9.

Last November, London Irish hosted 39 teams in the Land Rover Premiership Rugby Cup – a nationwide tournament for Under-11 and Under-12 teams which boasts over 7,000 participants each season – but it’s not just in Britain where the Exiles are helping to lay foundations for a new generation.

Their recent adventure to America to stage a home game against Saracens, becoming the first English club to host a competitive league game in the USA, looks set to serve as a breakthrough event for the Stateside growth of rugby union.

Using the NFL’s success in bringing competitive games to Wembley Stadium as a prototype, Premiership Rugby – together with USA Rugby, The Legacy Agency and key commercial partners such as Land Rover and Aviva – opened new doors for the sport at the Red Bull Arena in New Jersey.

It wasn’t a straightforward road for the organisers, but since London Irish stalwart Fitzgerald was influential in making the whole concept a reality, perhaps his legacy will live on to the benefit of other clubs on both sides of the Atlantic, and rugby as a whole.

“It was a long process,” Mike Principe, CEO of The Legacy Agency, told The Irish Post. “We started talking with [Premiership Rugby CEO] Mark McCafferty and David Fitzgerald and it was in the works properly for at least a year.

“David was very influential in getting it off the ground. He had a very wilful personality, I really enjoyed working with him to put this together. We’d like it to be an annual event and we’re looking at it for at least another two years. This game could be his legacy.

“We’re already working hard on building the sport, but if we could also build the brand of Premiership Rugby using London Irish, with such a big Irish community here in the New York region, it would give us a great platform.

“We have kids playing rugby in Brooklyn, which would never have been heard of a few years ago. If we can get the kids to start playing in a more organised fashion, with proper equipment, they’re going to come up through college and beyond.”

There’s every reason to suggest that rugby can become more structured in America, where there’s certainly no shortage of top quality facilities; London Irish were even able to borrow scrum machines from Yale University for their training base at the home of NFL side the New York Jets.

“The term ‘scrum machine’ is not something that is very widely used in the States,” laughed Principe, “but we’ve figured out very quickly how important these terms are.”

New York based Sebastian Cray, the Gotham Knights RFC coach who has taught rugby for six years on the back of a 14-year playing career, grew up in Canada and has been involved in the sport all over North America, where he has watched the continent's fastest growing sport go from strength to strength. 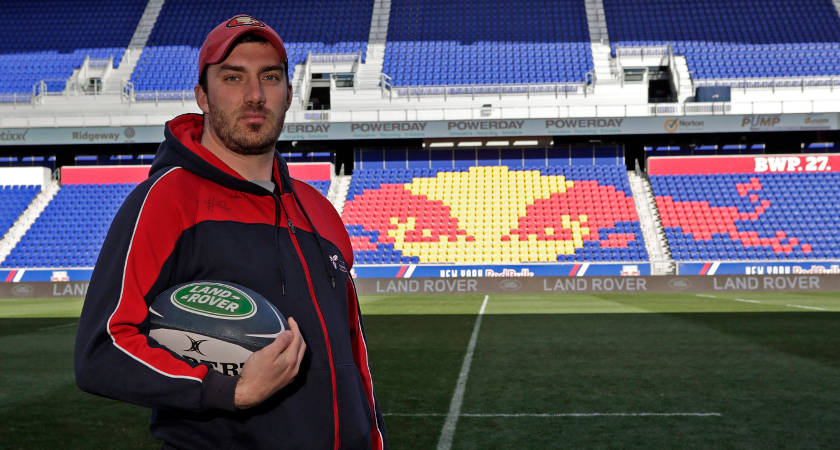 Sebastian Cray, pictured at the Red Bull Arena [Picture: Fast Track Agency]
“Lots of places, particularly the bigger cities, have been building multi-purpose facilities,” he said. “We’ve played in a lot of places where they have a soccer field, a lacrosse field and a rugby field all painted in different colours on the one pitch.

“But rugby’s easy enough to get started in, all you need is a ball and enough space, and because it’s growing so fast there are more places springing up where you can practice properly. They might not be fully decked out with changing rooms just yet, but there’s always room to play.”

London Irish were beaten 26-16 by Saracens at the Red Bull Arena, but Tom Coventry’s men put in a competitive effort against the defending Aviva Premiership champions. Cray enjoyed the spectacle and is convinced the game will help make rugby become ‘a big deal’ in his part of the world.

There were a couple of Canadians on the London Irish team, so it was good to come out and watch guys that you know of, but it was so exciting just to see a professional game. And not just a throw-away exhibition game, a competitive game with points at stake. Rugby is going to be more prevalent in public consciousness now. It’ll be a big deal, particularly if USA and Canada keep getting to World Cups and people keep putting on events like this.

Saracens' Connecticut-born utility back Chris Wyles believes rugby is perfect for the average American sports fan and suggests it is only a clever marketing strategy away from hitting the big time in the country of his birth.

“If they get it right, some really exciting things can happen in the next 10 years,” he said. “The difficulty is that America is full of amazing sports, but, that being said, I reckon American fans can really warm to rugby. Once an American sports fan watches rugby, they tend to become really fascinated by it.”

His team-mate Kelly Brown – who helped launch Land Rover's 'We Deal In Real' campaign, which celebrates grassroots clubs and players – concurs and believes both Saracens and London Irish can congratulate themselves for a job well done.

“We wanted to show them exactly what the game is about,” he said, speaking of the American onlookers. “It’s a physical game. It’s skilful, exciting, fast; all these things, and we’ve helped introduce rugby into a very large American audience. This is very much just the start. It’s exciting to see where it’s going to go.” 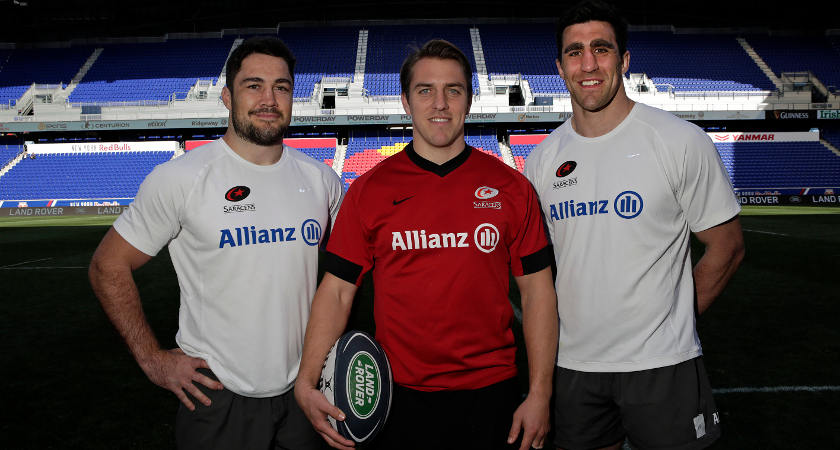 'We Deal In Real': Saracens captan Brad Barritt (left), with Chris Wyles (centre) and Kelly Brown [Picture: Fast Track Agency]
Some prefer to err on the side of caution, though. Premiership Rugby’s CEO isn’t getting too carried away just yet, for example, and McCafferty admits London Irish’s possible relegation from the top flight this season is a cause for concern as he bids for continuity.

“There’s always a few things that we can improve on, but that’s for learning for next year,” he said.

“We’ll sit down shortly to work out how exactly next year will work, so we are about to start fixture planning for next season in April and by the summer we’ll be looking to confirm where we’re at.

“It’s a London Irish home fixture and that’s the way it’s planned going forward. [But] It has to be a Premiership match. At the beginning of this arrangement we factored in relegation as it’s one of the features of our competition.”

McCafferty hopes that a professional league in the USA is a possibility in the not too distant future, from which American outfits may even become feeder clubs for Premiership sides.

“We’ve had a lot of discussions with USA Rugby around that and the various models that they’re looking at, to try and build the pro sport over here,” he said. “The appetite is there, we just have to be careful and systematic in how we build things.”

With over 50 per cent of the capacity filled at the Red Bull Arena – one of several key targets met by the organisers – the latest step has been a significant and successful one.

Whether the Exiles will be able to take part again next year, only time will tell, but the Irish will still have another chance to leave an oval-shaped mark on US soil when Joe Schmidt takes his Ireland side to Chicago in a bid to beat the All Blacks for the first time in their history at Soldier Field on November 5.