James Forrest celebrates after scoring to seal his hat-trick and century of goals for the club (Image: Craig Foy/SNS Group via Getty Images)

JAMES FORREST wrote himself into Celtic history in style as a hat-trick in Saturday's 6-1 win over Hibs saw him amass a century of goals for the Bhoys.

In doing so, the 31-year-old becomes just the 30th player to score 100 or more goals for the club.

Forrest has been something of a peripheral figure under manager Ange Postecoglou, starting only eight league games last term after picking up a knee injury early in the season.

He made his first start of the current campaign on Saturday along with several other fringe players as Postecoglou made five changes to the side that lost 2-0 to Leipzig in midweek.

Those called upon impressed with Aaron Mooy grabbing two assists in just his second league start, Alexandro Bernabéi also grabbing an assist and Giorgos Giakoumakis — who started on the bench against Leipzig — scoring twice.

However, it was one-club man Forrest who stole the headlines with his milestone hat-trick.

Speaking to Celtic TV after the game, Forrest — who made his debut in May 2010 at the age of 18 — said he had been happy to bide his time under Postecoglou.

"I was buzzing, it was my first start this season, you just have to wait your turn and work hard in training," said the winger.

"I've enjoyed the last couple of games coming on, I've been feeling good and I think I was ready to start today.

"I've contributed to help the team and got three goals as well so it's a great day all round."

On joining Celtic's 100 club, Forrest added: "It's incredible, I want to just keep working hard and keep trying to score more goals here but it's a great achievement and a great feeling." 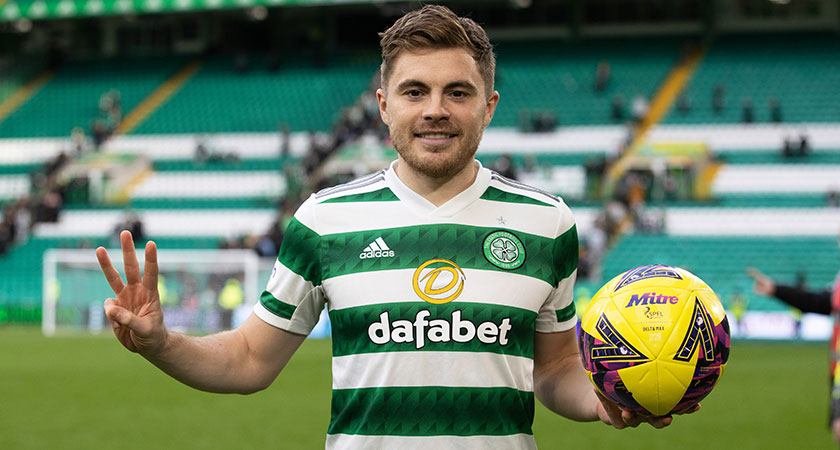 Forrest with the match ball after his hat-trick against Hibs (Image: Craig Williamson/SNS Group via Getty Images)

Giakoumakis doubled the lead 10 minutes later before Forrest made it 3-0 on 24 minutes when his shot from the edge of the box was fumbled over the line by Marshall.

Elie Youan pulled one back for Hibs on 56 minutes but just two minutes later, Forrest sealed his hat-trick when he drilled home Mooy's through-ball.

Giakoumakis grabbed his second on 73 minutes before substitute Daizen Maeda completed the rout late on.

'I know what they can do'

While Postecoglou has raised eyebrows among some fans with his player rotation this season, the Australian said the result showed the importance of utilising his entire panel when involved in four competitions.

"That's why we have this squad," he told Celtic TV.

"I know people question me rotating the team but it's the only way we'll get through this period and maintain levels of performance.

"We saw last year that when you rely on too few [players] that it doesn't work. 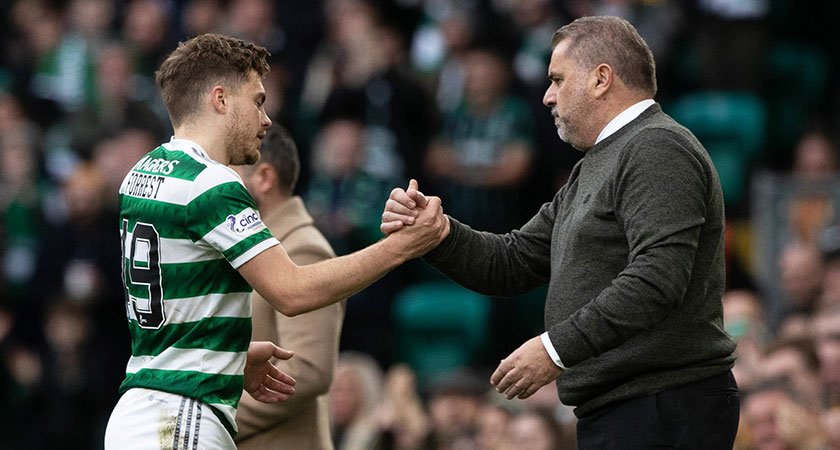 "I see these guys every day in training, I know what they're ready for and what they can do so there's no fear in me putting them in there.

"I'm super pleased that all the guys that came in were fantastic but obviously special shout-out to James Forrest — 100 goals for his football club is a fantastic achievement."

Celtic are next in action on Wednesday against Motherwell when they continue the defence of the League Cup, kick-off 6:15pm BST.