AUSTRALIAN international hooker Saia Fainga’a has joined London Irish as the recruitment drive continues ahead of the 2017/18 season.

Fainga’a, 30, made his Super Rugby debut for the Brumbies in 2006 and had a two-year stint with the Canberra-based club, before moving to Queensland Reds where he spent seven seasons.

Signing for the Reds with his twin brother Anthony ahead of the 2009 season, 36-times capped Fainga’a’s impressive form led to his Test debut against Fiji the following year.

Fainga’a played a key role in Queensland’s 2011 Super Rugby title-winning season and featured prominently for the Wallabies at the 2011 World Cup in New Zealand.

Representing Australia at every age group, Fainga’a is now setting his sights on the next chapter in his career.

“A move to London Irish presents me with an exciting challenge and one which I want to make the most of,” said Fainga’a.

“I’ve heard great things about Irish and it’s certainly a forward-thinking club with big plans for the future. I’m delighted to be a part of what Nick Kennedy is building.”

Exiles’ boss Kennedy is delighted to have got his man, saying: “Saia is a superb signing for us and has a stellar rugby playing CV, having played at the highest level for both club and country. 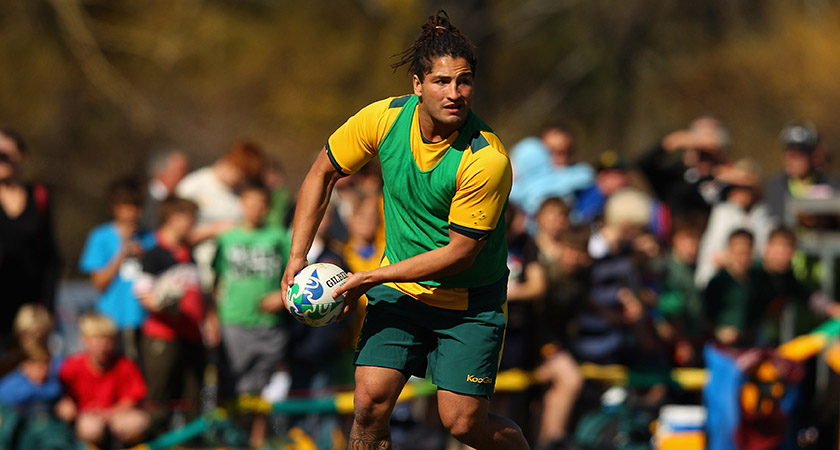 “He will intensify the competition for places in the front row and I’m intrigued to see what he can bring to the team.”

Petrus Du Plessis has also agreed a deal to join London Irish ahead of the 2017/18 season.

The South African English qualified front-row joined Saracens from Nottingham in 2009 and has since made 158 appearances for the North London club. A firm favourite amongst the Allianz Park faithful, Du Plessis has gone onto become one of the finest scrummagers to grace the Premiership.

Playing at Saracens under current Irish Technical Director Brendan Venter, Du Plessis’ final game for the Fez Boys was as a second half replacement in a 28-17 Champions Cup Final victory over Clermont Auvergne in May.

Eager to embark on a fresh challenge with Irish, Du Plessis said: “London Irish is a club steeped in history and tradition and I’m really looking forward to pulling on the famous green jersey. 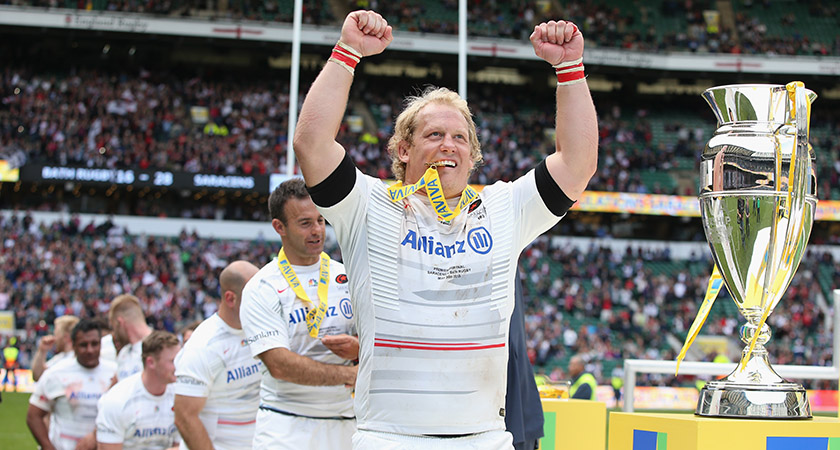 “The club has a very talented pack with a mixture of youth and experience which bodes well for the future, and I’m looking forward to getting stuck in.”

Delighted with his latest acquisition, Exiles’ boss Nick Kennedy said: “Petrus’ experience will be invaluable for us as we gear up for a return to the Premiership.

“Petrus adds to the experience that we currently have, but will also be important for the development of our young front rows coming through the ranks.

“I’m looking forward to welcoming him to the club this summer.”

Nalaga, 31, who racked up 105 tries in 165 games during two stints with Clermont Auvergne, was a Heineken Cup Finalist in 2013 with the Yellow Army where his side were narrowly defeated 16-15 by Toulon at the Aviva Stadium.

A try-scorer that day, the Fijian international also came up against current London Irish Director of Rugby Nick Kennedy who was in Toulon’s second row.

Standing at 6ft 3” and tipping the scales at 17 stone, the explosive flyer made the switch to Lyon in 2015 and wasted no time in introducing himself to Les Loups faithful by scoring 14 tries in 12 games in his first season. 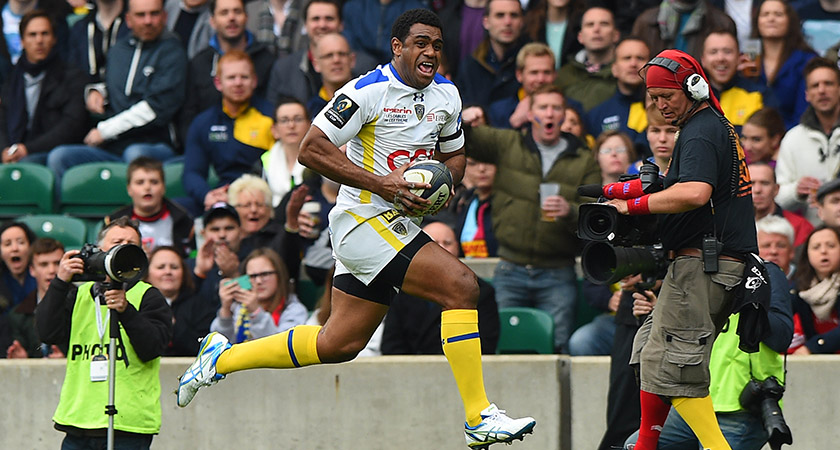 Nalaga went on to contribute seven tries in 20 appearances for Lyon last term as the Stade de Gerland outfit narrowly missed out on a place in the European Rugby Champions Cup Play-off.

Lifting the Top 14 crown with Clermont in 2010, Nalaga’s will to win is a trait he is itching to bring to Irish.

“I’m really pleased to have the opportunity to join London Irish in the Premiership and I’ll be doing everything I can to help the club perform to the high standards that this club demands,” said Nalaga.

“I’ve always had the ambition to play in the Premiership and I can’t wait to show what I can do on the big stage with Irish, a club that has fantastic support.”

Delighted to have got his man, Exiles’ boss Kennedy said: “Napolioni is a great addition to the London Irish squad and we’re all looking forward to welcoming him to the club this summer.

“I played against him in the Heineken Cup Final in 2013 and he was superb throughout the game. He’s improved his game year on year and has the try scoring ability, passion and determination to succeed in the Premiership.

“He’ll undoubtedly add firepower and a clinical edge to our backline with his uncompromising running game.” 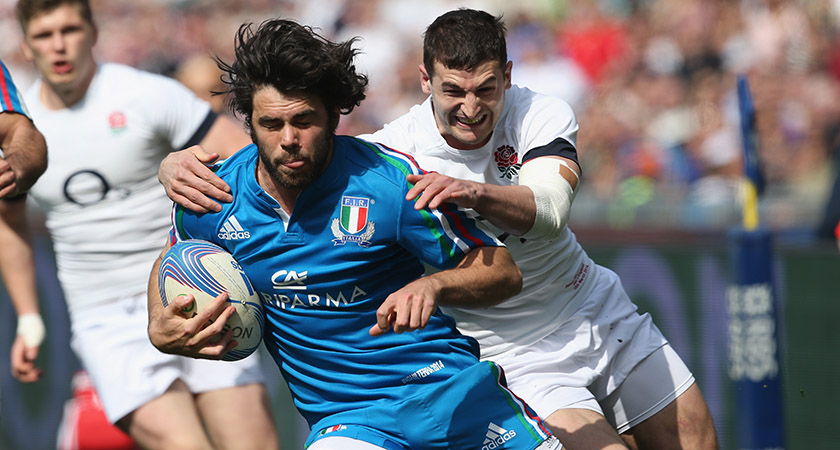 Luke McLean has 89 caps for Italy but was born in Australia. Picture: Getty

The versatile back, 29, who has Premiership experience and 89 Italy caps to his name, played in all of his country’s RBS 6 Nations matches this year.

Launching his playing career at Perth Spirit in 2007, Australian-born McLean made the switch to Italian side Calvisano the same year where he spent two seasons prior to his move to Pro12 side Treviso.

McLean enjoyed five seasons with Treviso during which time his international career went from strength to strength and in 2014 Sale Sharks came calling for his services. The fleet-footed back who can play at either full-back, wing or centre returned to Treviso in 2015.

Assured under the high ball coupled with an intelligent kicking game, McLean brings experience to the Exiles’ backline.

“I’m thrilled to have signed for London Irish, a club that has big ambitions and I’m excited to join up with my new teammates,” said McLean.

“The club has a top class coaching set-up headed up by Nick Kennedy, who coached the team to play some attractive rugby last season and hopefully I can add to that.”

“I’m delighted with the signing of Luke, who is a fantastic addition to the squad as we look to progress in the Premiership,” said London Irish Director of Rugby Nick Kennedy.

“His experience and calm head under pressure will serve us well and I’m looking forward to welcoming him to the club for the start of pre-season.”

The Irish Post is proud to be the Official Media Partner to London Irish RFC.