TWO weeks ago, Jarlath Cloonan, the Galway hurling PRO, and former senior hurling manager, was no longer willing to dance around the elephant in the room; he loaded his bullets in the chamber and outlined why Galway were threatening to shoot the elephant.

Why? Seven years on from joining the Leinster senior championship, the province’s counties continue to resist Galway’s proposals for home and away arrangements and their participation in the minor and U21 championships.

Galway had competed in Munster before, albeit unsuccessfully. If they received the conditions they were looking for, Cloonan said Galway would have no issue going back into Munster again.

“The whole thing has gone pear-shaped,” said Cloonan. “Either we’re fully integrated into Leinster or we’re out. All-in or all-out. We need championship games in the city of Galway.”

Although huge strides have been made in developing the game there, Galway city has never had the same hurling culture compared to east and south Galway.

And in that vacuum, Connacht Rugby, which is based in the city, continues to exploit.

“How long more,” asked Cloonan, “are the Leinster Council and the GAA going to stand idly by and deprive Galway, the fourth largest city in the state, hurling championship games?”

Galway certainly have a case. Their arrival, and Dublin’s emergence as a force, helped re-energise a moribund Leinster championship. Yet the Leinster Council also realised the merit of home-and-away agreements, and in taking the provincial semi-finals out of a near deserted Croke Park, in revitalizing the championship.

However, that doesn’t apply to the earlier round-robin stages of the championship which Antrim, and Kerry this year, were afforded home advantage on the same terms as the other three teams in the group.

GAA President Aogán Ó Fearghail and Paraic Duffy, Director General, have a case to answer [Picture: Inpho]
Galway have a legitimate case for home-and-away agreements but their demands for their minors and U-21s is a trickier one to solve. The Leinster counties have always wanted to keep Galway out of their underage competitions, mainly because they are putting self-interest first.

Galway would present such a major challenge that those Leinster counties have no wish or reason to accommodate a county which has been such an underage powerhouse over the last two decades.

That was also the reasoning behind the opposition from Offaly, Wexford, Dublin and Laois to Galway's arrival in the Leinster senior championships in 2009.

Just as they were back then, Wexford are still vehemently opposed to Galway’s underage teams joining Leinster. They have based their current stance on their strong dual status. Of 49 clubs in the county, only a handful don’t play both games.

"Galway have a lot of traditionally strong hurling clubs that only play hurling," said former Wexford manager, Liam Griffin, last week. "We're trying to do it the best we can whereas other counties all over the country are not even making an effort. We're trying to foster both games equally. Tell me where is the credit side for us in that? It's all debit, there are no credits for doing that, just ridicule for not winning all these things.

"There is a residual feeling, it's not that there is anything against Galway per se, but it's a combination of a lot of things that if we give up this at underage level, look what it has done for us at senior level. Wexford are better off for reaching Leinster finals."

There is no doubt Galway’s underage teams would contest Leinster finals at other Leinster teams’ expense. Yet Galway’s push for more competitive action for their underage teams, especially at U21, has a wider agenda for them. 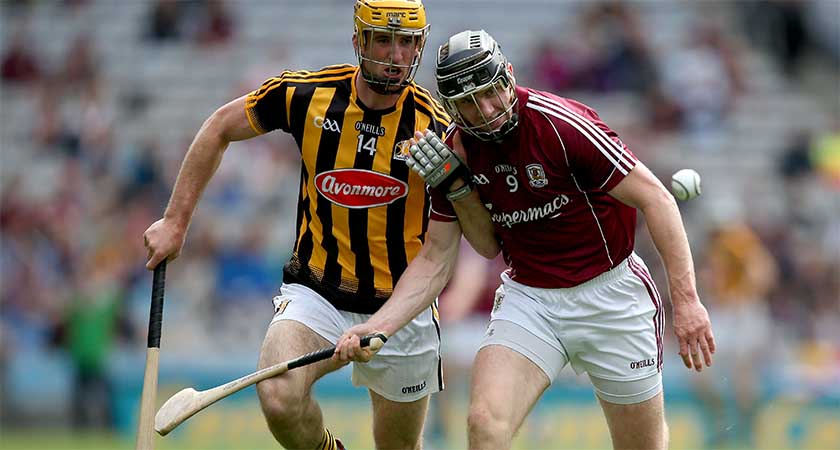 Galway have added proper competition to Leinster [Picture: Inpho]
At minor level in particular, where Galway have won nine All-Irelands in the last 24 years, what benefits have they really accrued from those successes? Has success softened some of those young players? Would they have learned more about themselves, and what it really takes to win at senior, if they had to come through gruelling campaigns in Leinster?

Galway’s difficulties at U21 level – where they go straight into an All-Ireland semi-final – has been a key issue in their struggles in that grade in recent years, with just one All-Ireland title in the last nine seasons.

In that context, Cloonan’s suggestion of returning to the old system where the Galway seniors go straight into a semi-final, is not a realistic proposal. He, and Galway know that too, but they are clearly angling for something before they possibly press the nuclear option.

They are certainly threatening action. Galway club Liam Mellows have tabled a motion to their convention seeking clearance to apply to the Munster Council for inclusion in all their competitions if facility for home matches and entry to minor and U21 competitions isn't granted by Leinster.

Would Munster take Galway in? No way. It would make the Munster championship even more box-office but such a move would effectively torpedo the overall competitiveness of the Leinster championship. Leinster have been trying to appease Galway by an annual “top-up” funding of €20,000 from the Council for the last couple of years but that sum is just tokenistic.

How long does a sum like that stretch for a county which repeatedly has to travel for away games? Cloonan also put it another way. “How much money,” he asked, “have Galway matches generated for the Leinster Council compared to what went on beforehand?”

The reluctance of the Leinster counties to cede to Galway’s demands are understandable. Yet given what Galway have done for the Leinster championship over the last seven years, their demands are not unreasonable. At this stage, they have more than earned the right to same status, and privileges, as the other teams in the province.