LONDON, ENGLAND - DECEMBER 15: Gerwyn Price of Wales reacts during his Second Round match against Ritchie Edhouse of England during the William Hill World Darts Championship at Alexandra Palace on December 15, 2021 in London, England. (Photo by Luke Walker/Getty Images)

REIGNING CHAMPION Gerwyn Price has asked for a postponement of the William Hill World Darts Championship due to coronavirus problems obscuring the event.

The latest player to test positive for the virus was Dave Chisnall, he has now been forced to withdraw from the tournament

Price, who is the World champion wrote on his Instagram Story:

“Tournament needs to be postponed”. 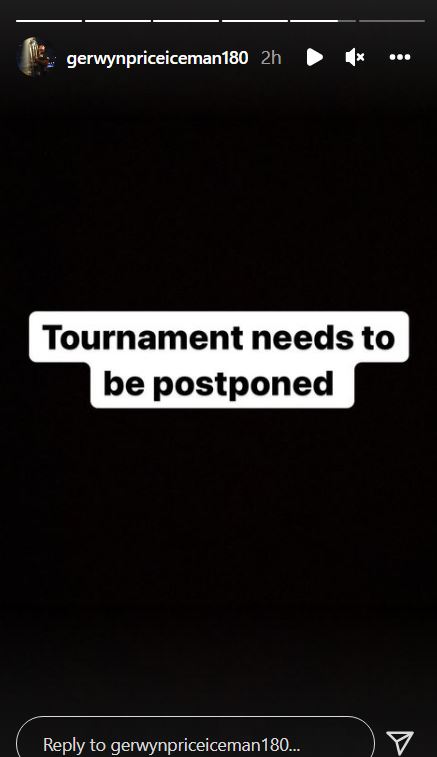 “I’ve been in their position so I feel for the players that have had to withdraw, there’s a lot of hard work gone into getting events like the World Championships on so postponing probably isn’t the best option but an option I wouldn’t disagree with, time to keep myself safe and out of touch…keep safe all”.

The Welshman Price, the world number one, is due to play Dirk van Duijvenbode in a fourth-round match on Wednesday evening.

Chisnall was due to play Luke Humphries in the last-32 on Wednesday, with Humphries now receiving a bye.

A statement from the PDC read: “Dave Chisnall has withdrawn from the William Hill World Darts Championship after testing positive for Covid-19 ahead of his match with Luke Humphries.

“Humphries will receive a bye to the last 16 and Wednesday afternoon’s session will continue with two matches.”

Michael van Gerwen tests positive for Covid-19 and is ruled out of the World Championship.

Chris Dobey receives a bye to the Last 16. pic.twitter.com/fXd8SUxHw4

Memories of a Golden Age in Gaelic Games