ERIN GO BRAGH are this season’s Intermediate Football League winners, a title confirmed after their comprehensive victory over Sons of Erin yesterday afternoon.

Their 9-18 to 0-08 win at Holly Lane was enough to see the Erdington club finish unbeaten in the division.

Their closest challengers were St. Josephs who finished in second place after a lively contest with St. Marys on Sunday afternoon concluded in a draw.

St. Finbarrs ended their league campaign with a 2-13 to 2-03 win over Four Masters at Holbrooks, a result that was good enough to seal third place in the table.

The game of the day was played under stormy, brooding skies at St. Benedict CVA in Derby. With the thunderclaps setting the tone for an exciting second-half’s action, both Derby and Wolverhampton pushed each other to the limit as Alan Brooks’ late equaliser ensured the game finished level on 1-10 apiece.

With the sides level going into the second period as the rain descended, there was what looked to be a crucial intervention when Emmet Marren pounced at the back post to fire the ball beyond Josh Amos for a Derby goal.

However, St. Marys hit back with a free from Dan Snell which was cancelled out by Dan Gilligan at the other end. Wolverhampton struck back with a run of scores to bring themselves back into contention, Brooks lobbing over a close range free before Mikey Walpole lashed over from close range. 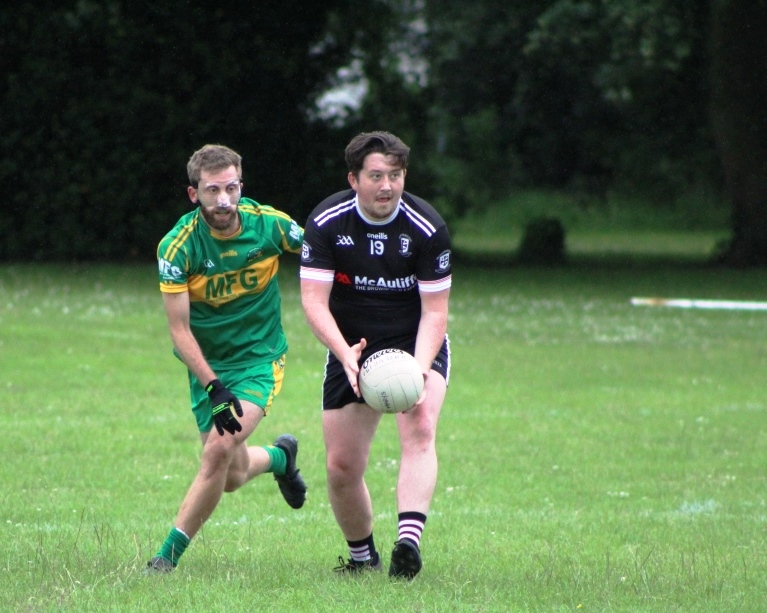 They were level when Snell fired over another score from long distance before repeating the trick moments later as the rain lashed down on Darley Abbey.

Substitute Ryan Newell struck from close range to bring the teams level as the game moved into the final stages and when Derby were awarded a free fifteen metres out it was Newell who looped over the leading score.

However, St. Marys wouldn’t be denied a leveller as Brooks hit back from the right.

There was still time for both teams to find a winner, John Collins going closest of all for Derby with a low drive that was superbly saved by Amos.

In the end, with the thunder crackling in the distance, it was honours even.