With Nottingham having comfortably defeated both teams in the opening two rounds of the competition, it was a straight shoot-out between EGB and Finbarrs for the second final spot as the two teams met at a rainswept Holly Lane.

With the home side enjoying the double advantage of the storm at their backs and playing downhill in the opening thirty minutes they opened the scores through Kieran Boxwell only to be pegged back by a break upfield by Finbarrs which culminated in a rasping drive to the net by John Hughes.

Back came EGB who drew level thanks to a score from play by John Boxwell, before Cathal Dineen’s free for Finbarrs restored their advantage in a busy couple of minutes that saw the home side lose their goalkeeper Michael Harrigan to a red card. 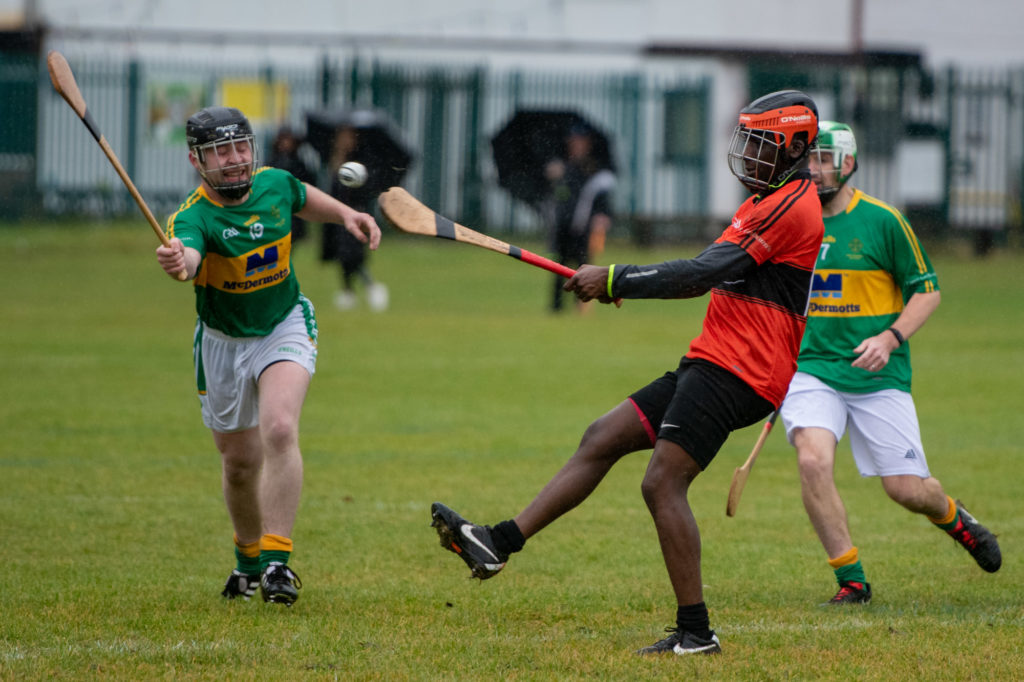 Despite this, the home side flew into the lead with Eamon McWilliams lofting an effort over a retreating Aidy Moore and into the net before Kieran Boxwell and McWilliams once more extended that advantage.

Finbarrs responded once more with their second goal of the half, Ben Muldoon lofting the sliotar into the back of the net with the home side protesting for a foul on the goalkeeper.

The goal stood as EGB raced back down the other end to cement their lead by the interval when Moore couldn’t keep Boxwell’s teasing free from sneaking into his goal, before the same player slotted over another free to leave his team eight points up at half-time.

The visitors rallied early on in the second period, Dineen sending over his second free of the afternoon before following up with a fine solo run and score down the left flank. 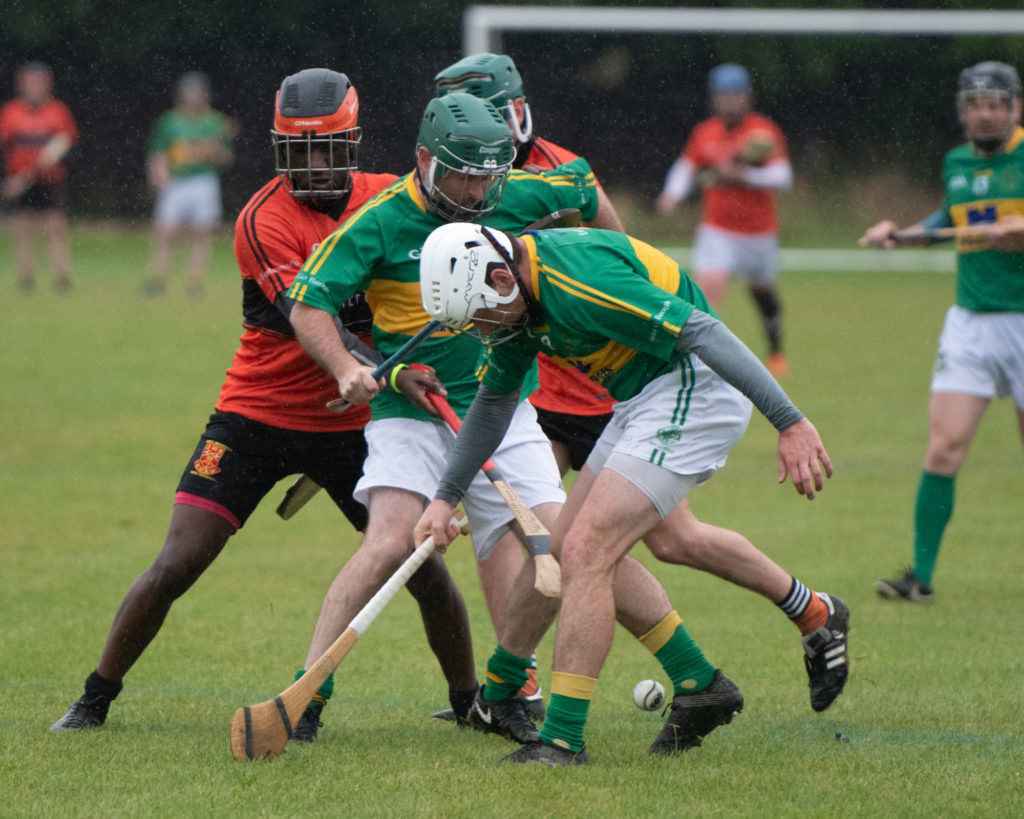 A midfield tussle for the ball

Yet during these opening stages Finbarrs lost midfielder Stephen Clarke to a straight red card and just moments later full-back Lewis Fairgreaves was sent to the side lines in a pivotal few minutes in the contest.

Nonetheless, Finbarrs spent the remaining period of the match gradually scratching away at the deficit.

Two more frees from Dineen and another point from open play left just five points between the teams, despite Boxwell tapping over another free at the other end.

When Tom Kelly fizzed a low drive over the Finbarrs crossbar it looked as though Erin go Bragh were safely through to the final but still Finbarrs came back at them with Muldoon and Dineen landing good scores from open play and when Muldoon picked up a square pass it needed a tremendous diving save to keep a third goal at bay.

Dineen managed one final score at the end but Finbarrs’ comeback ultimately came up short, leaving Erin go Bragh to advance to this Saturday’s rematch with St Barnabas in the final.

Over at The Sphinx yesterday afternoon, Roger Casements hosted Oisin in the opening game of the Ladies’ North Britain Championship (Liverpool’s John Mitchels the third club participating in this curtailed season with no Scottish clubs entering the competition due to the pandemic) and it was the Manchester club who came away with the victory in Coventry.

There was more Manchester success for both the Fullen Gaels’ hurling and camogie panels on Saturday, while their camogie juniors were sealing the Provincial Junior Camogie Championship in Birmingham their hurlers claimed the Lancashire Hurling Championship once again with a 2-17 to 0-7 win over Wolfe Tones.

By: Anthony McLaughlin  -  4 months ago