A CRACKING game of football between St Brendans and Erin go Bragh was eventually settled in favour of Brendans as both their Senior and Junior clubs recorded victories on the upper pitch at Pairc na hÉireann this afternoon.

Brendans’ Juniors made it two wins from two in Junior Football League B, a result that will ensure they finish top of the group.

It was the first game of the restarted season for their Senior panel at the weekend, having sat out the opening round of fixtures in a league of five clubs while for EGB this was their first taste of action having not played against Sean McDermotts the previous week. 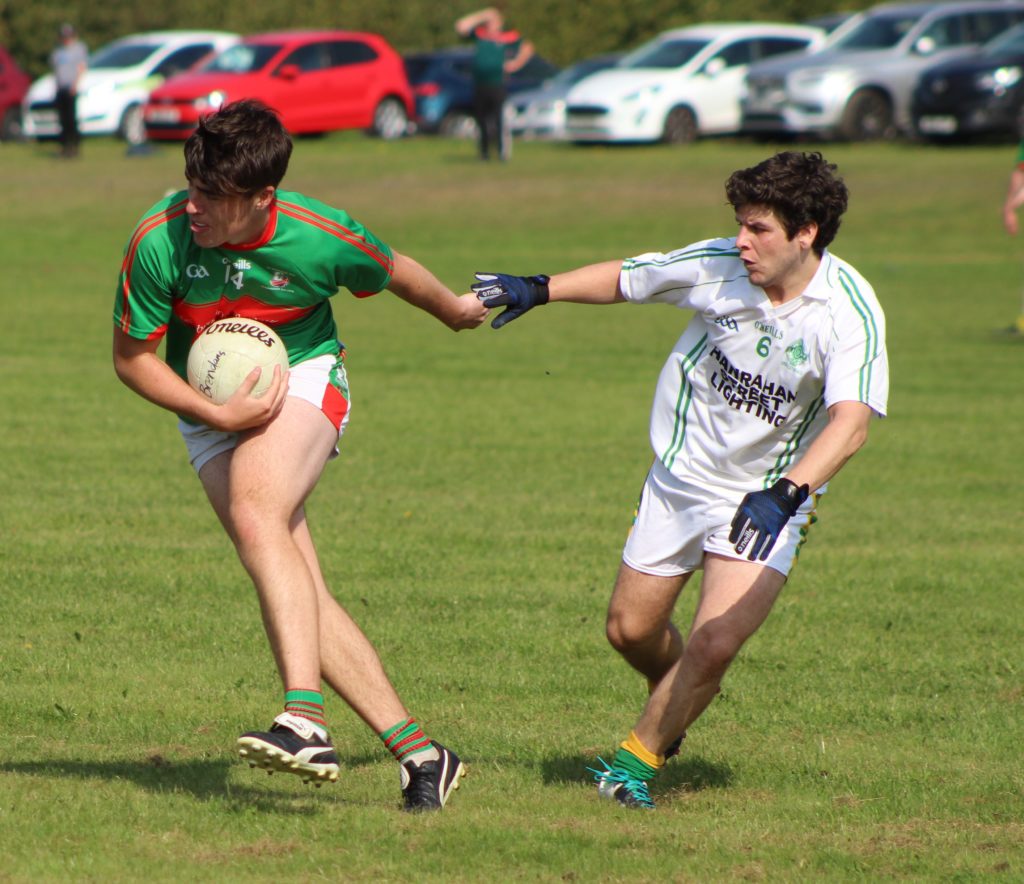 Go Bragh were sprightly out of the blocks in this game, Liam Doyle needing to be alert to deny Chris Rodgers an early goal with a sprawling point-blank save.

However, EGB followed up with a forty-five that dropped into the goalmouth that Brendans couldn’t clear resulting in a snap shot finding the back of the net.

With Doyle called upon yet again moments later, Brendans needed to find a spark and one arrived off the boot of Niall Glendon before Tom Hayden added their second score from open play.

Full-forward Noel McDaid got in on the action moments later to add his side’s third score before Brendans were awarded a penalty that was converted by Declan Hayden. 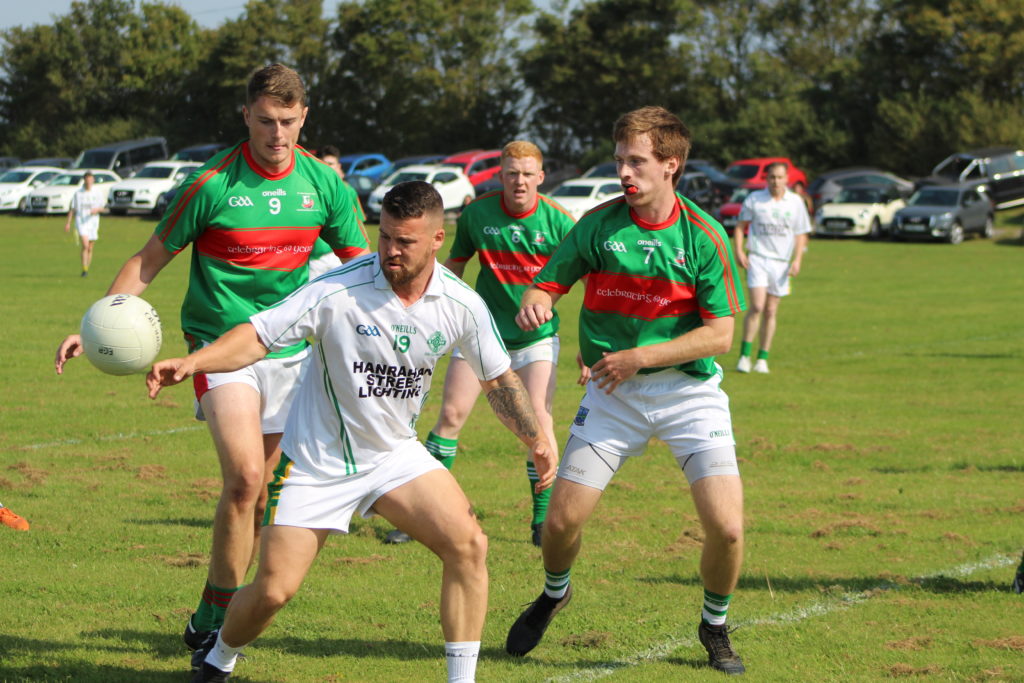 The teams compete for the ball

Holding a slender one-point lead at the interval, Brendans had the benefit of the breeze at their backs in a second-half which saw Michael McGettrick exert much more influence in driving his team on from half-back.

It was during those first fifteen minutes of the second period that his side started to gain an ascendancy, typified by a fine strike by McDaid that was soon followed by a powerful run and point by McGettrick.

It looked as though McGettrick would fire his team to a vital two points in the table when he came forward again from defence to drive another effort straight between Daniel Rushe’s posts but EGB hit back to tee up a grandstand final few minutes when James Harrigan slotted the ball past Doyle from a very acute angle. 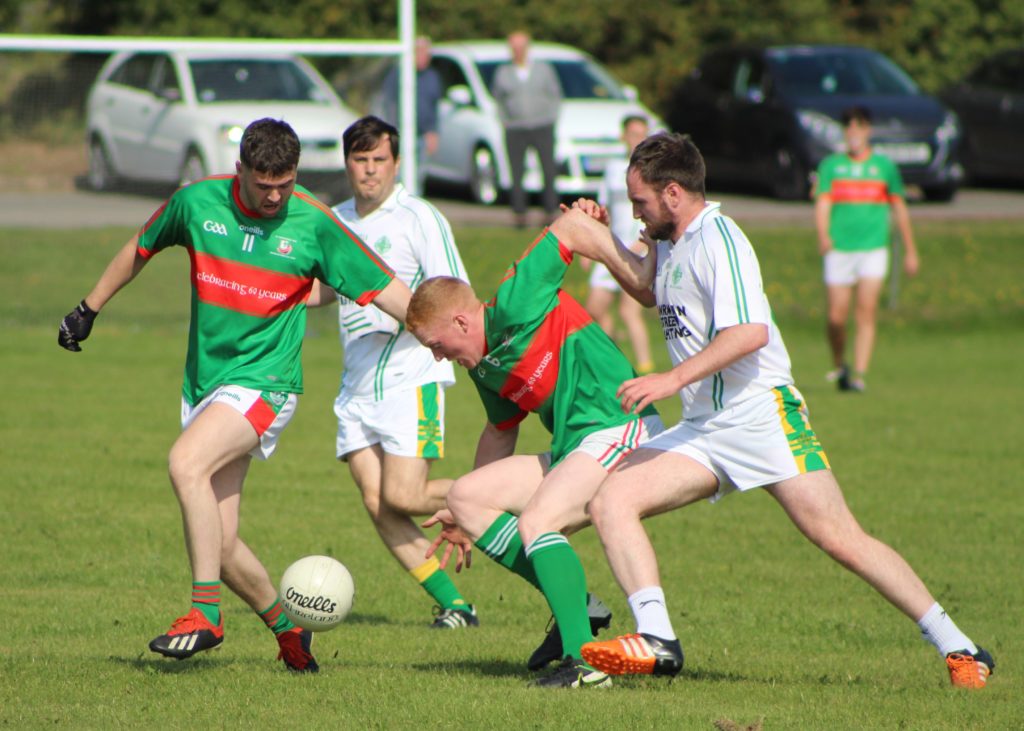 Michael McGettrick is challenged for the ball

However, Brendans responded once more and thanks to points from McDaid and Declan Hayden at the double (one free) they held on to open their league campaign with a win.

Sunday also saw the return of the Ladies’ Football Championship with Roger Casements and St Barnabas getting their campaigns off to winning starts.

For Casements it was a comprehensive performance that saw them defeat Sean McDermotts on a score line of 5-13 to 0-1 and they will host John Mitchels this coming Sunday at The Sphinx in the next round of games. 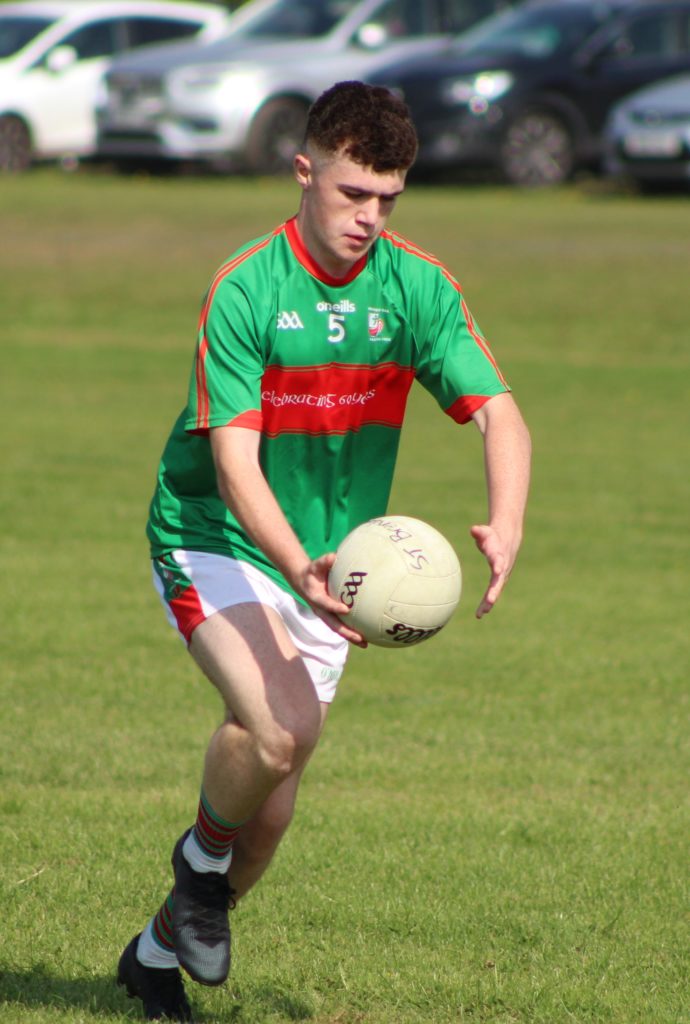 In Leicester there were eight goals shared between the teams with Barnabas coming away 6-10 to 2-4 victors.

For Fullen Gaels, Saturday brought cheers for both their hurling and camogie teams with the hurlers defeating both Yorkshire Emeralds and Wolfe Tones in a hurling blitz while down in Birmingham the camogie team defeated Tara by 3-6 to 0-3.