OVER the course of the last decade since its release, Dropkick Murphys' Platinum-selling single I'm Shipping Up to Boston has become synonymous with sport.

Although there's no direct link between the lyrics and sport of any kind, the song's aggressive, Celtic-influenced punk tones are best reserved for a powerful PA system, the type you'll find at any noteworthy sporting arena.

As such, it has become the ultimate entrance music. The Boston-based band's most recognisable song is blasted out before every home game at the Aviva Stadium in Dublin – be that soccer or rugby – while London Irish RFC also enter the Madjeski Stadium pitch to the same tune.

Yet the 'Fighting Irish' feel of the song sounds most at home when piped out indoors at a martial arts event, namely boxing, MMA or even wrestling. Indeed, the band takes its name from iconic American wrestler John E. "Dropkick" Murphy.

Despite the inspiration behind the name, Dropkick Murphys are actually more closely associated with boxing. Since 2010, frontman Ken Casey has been quietly building a charitable empire named Murphy's Boxing and, on Saturday night, the project made a significant stride with its most high-profile card to date.

“Boston has such a rich boxing history and if I could play any role in bringing it back to its glory days I would be a proud man,” bassist and lead vocalist Casey told The Irish Post.

“We have been at it for about five years. We've done four shows at the House of Blues in Boston, which holds about 2,500 people. We also did a Danny O'Connor show at the Boston Garden and sold 6,000 tickets, while we did a post-game show at Gillette Stadium, where the [NFL side New England] Patriots and [MLS team New England] Revolution play.

“We've also done many shows at Memorial Hall in Plymouth, Massachusetts, and Memorial Hall in Melrose. So we have probably done 12 to 14 shows under our belt and we are very happy with the support we have received.”

Topping the bill at The Lowell Auditorium on Saturday night was Irish-American Danny 'Bhoy' O'Connor, but the hometown hero suffered a brutal first-round knockout defeat to Gabriel Bracero. Significantly, though, it was broadcast live on terrestrial television throughout America via NBC Sports.

Although the main event didn't go the way Murphy's Boxing associates would have wanted, that exposure is crucial for the longevity of this non-profit organisation.

And it wasn't all doom and gloom on the night, as the undercard featured three fighters from Dublin's famous Celtic Warrior Gym, which is run by renowned trainer Packie Collins, brother of Ireland's former world champion middleweight Steve.

Cork middleweight Gary 'Spike' O'Sullivan, who signed for Murphy's Boxing earlier this year, stopped David Toribio inside two rounds and is now expected to go on to face Chris Eubank Jr in London on December 12, a fight he has been chasing for about three years.

Speaking to The Irish Post earlier this year after signing for Murphy's Boxing, O'Sullivan said: “Ken is looking after me now and, in fairness, he is a man of his word. He’s a really nice guy and really good to work with.

“He’s promoting me very well; I don’t think any other promoter could promote me as well. He has me going out on stage at Dropkick Murphys gigs. I had thousands of new T-shirts made and they sold out in two nights, which is crazy.”

The Boston crowd also witnessed knockout wins for Dublin duo Stephen Ormond and Patrick Hyland, who stopped Michael Clark and David Martinez respectively, and Casey is enjoying the strong working relationship he has built up with those based at the Celtic Warrior Gym.

“Boxing is still so popular in Ireland, so it's nice to work with people that are in a rabid boxing environment,” he said. “I was obviously a huge Steve Collins fan and Steve and Packie have such a great connection to Boston. We came together through mutual friends that we both trust and respect so there is a lot of trust and respect between Celtic Warrior Gym and Murphy's Boxing.”

Casey, whose great grandparents were from Macroom in Cork, started Murphy's Boxing in conjunction with his band's charity The Claddagh Fund, a non-profit organisation which raises money for the most underfunded charities that support vulnerable populations in the Boston and Philadelphia areas.

As most promoters know, there's serious money to be made in boxing if events are organised in the right manner. Tales of greed, corruption and skulduggery stretch back to the origins of the sport, but for Casey any profits made go straight to The Claddagh Fund.

However, he insists Haymon's Premier Boxing shows are good for the sport and is adamant Murphy's Boxing will not become a profitable organisation.

“I will never leave the charity behind,” he insists. “It's my main focus in life. Even more so than the band. It's what makes me feel like I have a purpose in life.

“I don't deal with Al Haymon directly. Not many do. I deal with his number one and number two people, but he is doing great things bringing all these fights back to national prime time TV. This was our second show on NBC.”

It's a refreshing attitude from a rock-star-turned-promoter, and Casey's passion, determination and will to help the underprivileged through sport is clearly genuine.

Alas, no article on the boxing scene in Boston is complete without a mention of 'Irish' Micky Ward, who earned legendary status via his trilogy of fascinating fights with Arturo Gatti between 2002 and 2003. 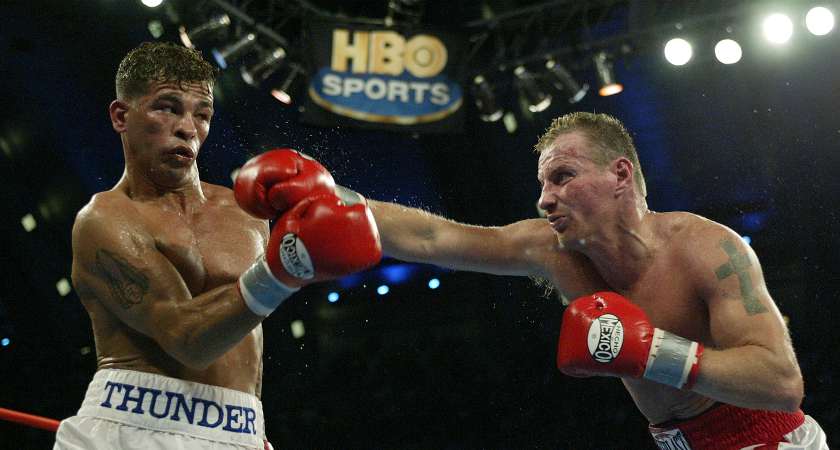 Famed fighter Micky Ward, right, was of Irish descent [Picture: Getty]
Yet for all his exploits inside the ring, Casey claims Ward – who appears on the cover of the Dropkick Murphys album The Warrior's Code – has earned just as much respect from the people of Boston for his achievements outside of the ring as he did inside it.

“Micky is one of the nicest guys you'll ever meet,” said Casey. “He's probably more popular here due to his personality and all the stuff he does in the community more than anything he ever did in the ring, and that is really saying something because he was so entertaining in the ring.”

Likewise, should Murphy's Boxing and The Claddagh Fund continue to go from strength to strength, Casey's popularity as a Celtic punk rock performer could soon be eclipsed by his charitable achievements in boxing.