Dublin , Ireland - 21 November 2021; Peter OMahony of Ireland points at Tomas Lavanini of Argentina after his tackle on Cian Healy of Ireland leading to a red card during the Autumn Nations Series match between Ireland and Argentina at Aviva Stadium in Dublin. (Photo By Harry Murphy/Sportsfile via Getty Images)

PETER O' MAHONY gave the Argentine second rower Tomas Lavanini a piece of his mind yesterday, when the Clermont man put in a reckless challenge against Ireland teammate Cian Healy.

The challenge was one that irked O' Mahony and the Irish crowd. Lavanini was sent off for the challenge and the Munster man gave him an earful that was caught on camera and social media. 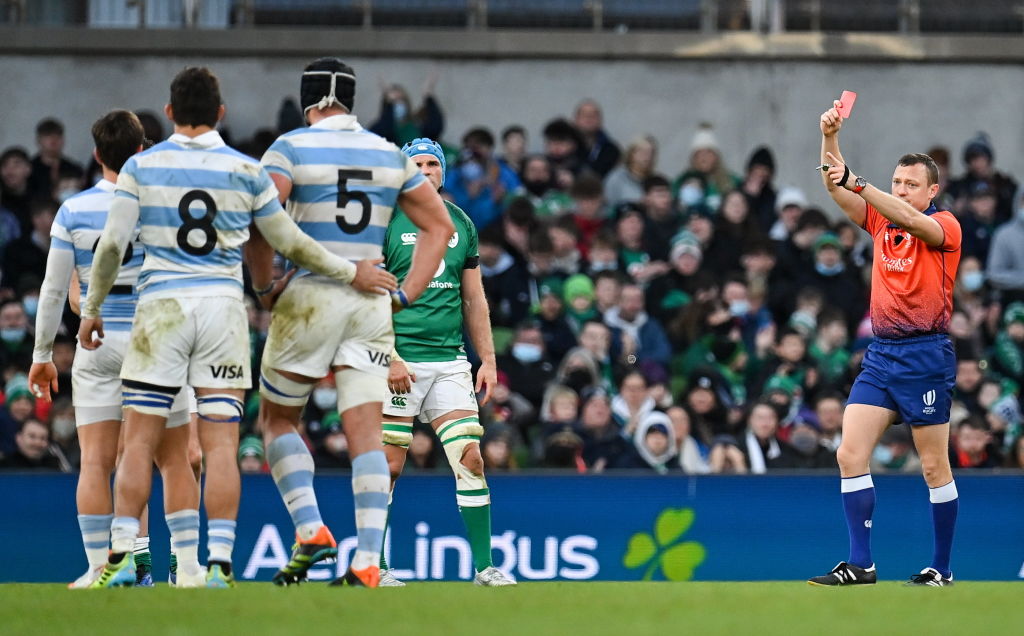 O'Mahony, who took over the captaincy, when James Ryan went off injured, gave the Argentine a right earful.

"You're a scumbag, you knew exactly what you were doing, you think you're a hard man? watch yourself O'Mahony declared, as replays rolled on the big screen.

"That's very unlike you," he added

Ireland were cruising through the game, when the Argentine went into cleat Healy out of the breakdown. The Leinster man was low in the ruck, Lavanini dived in lower and connected with the shoulder and head.

The referee and his TMO were in agreement that Lavanini had to go, and a red card was brandished.

After the post-match, O' Mahony cooled down and understood that it was heat of the moment stuff;

"Ah look, it’s heat of the moment stuff. I’ve been on the other side of that as well so it’s a split-second decision from his point of view. There isn’t much to be said about it now."

Cian Healy would have the last laugh when he went over for a late try. Ireland kept their foot to the floor over the final 20 minutes and would go on to win 53-7 against Los Pumas.