JOE SCHMIDT is obsessed with the size of the challenge ahead. And he makes no secret of it, either.

Three times last week he was asked about the prospect of going where no rugby team had ever gone before, to a third outright Six Nations title, and three times he doffed his cap to the Welsh.

We don’t even talk about a Six Nations campaign. We can’t start looking any further ahead than this Sunday. Wales come into the competition as the team who have the best continuity, who comfortably have 300 caps more than any other country in the competition and on top of that, we know how physically combative they are.

Now while we have huge confidence in Rory (Best, the new Ireland captain) filling a leadership void, one of the things people overlook about Paul is how good a player he is. I thought he was playing some of the best rugby I have ever seen him play in the World Cup. That’s where your captaincy starts. I would also say I thought Rory was outstanding in the tournament, a really consistent performer for us. And we need that across the board to stay competitive.

Staying competitive couldn’t be harder, though, especially when the fixture planners have left Ireland with a schedule as appealing as a Siberian holiday. First up is Wales, the only side to beat Ireland in last year’s championship. Then, six days later, it’s France in Paris, and not the old France of Philipe Saint-Andre but the new model created in Guy Noves’ image. And as if that wasn’t daunting enough, England come next. At Twickenham.

So there you have it. Both history and disaster are staring Schmidt in the face. And yet he could afford a smile. “Paris? Sure we win there regularly... every 40-odd years,” he joked. “I know that’s another massive challenge for us because I know they will be excited with Guy Noves going in there. Nothing will be easy.”

It never is. We thought he had it easy in the World Cup, handed a schedule that saw Ireland’s games get incrementally harder — Canada, Romania, Italy then France and then, supposedly, the easiest quarter-final on offer. Except that Argentina didn’t read the script. Instead they tore it up.

“There were harsh lessons for us there,” Schmidt said. “But whether it’s on a rugby pitch or a commercial enterprise, if you’ve got people who’ve been in a situation before who have the experience, who have made good or bad decisions and have learned from them, I think you’re in a stronger position going forward.

“When I reflect on it, there are a whole lot of circumstances which weren’t ideal for us in the lead-up to that match. There were the injuries (O’Connell, Johnny Sexton, Peter O’Mahony, Jared Payne were all unavailable, while Sean O’Brien was suspended) and then there was the first 10 minutes.”

By then Ireland were 14-0 down. And it got worse. Argentina stretched their lead to 20-3 before the comeback began, as Schmidt recalls.

We had a kick to draw level at 23-23 with 14 minutes to go. We had a chance. But sometimes you don’t quite negotiate your way, you over-chase the match and it goes against you. Those are the fine margins at top level sport. At the same time, I thought it was a heck of an Argentinian side and it was a super performance from them. In that first 10 minutes, they physically dominated us. That’s something you just can’t afford to do in a Test match. They put us on the back foot right from the start and when you’ve got a less experienced group on the back foot who probably haven’t been in that situation before, you can lose a few points. But, to give our guys some credit, they really did fight their way back into it. 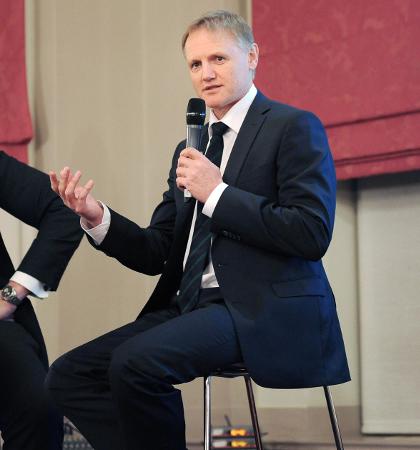 Joe Schmidt [Picture: Mal McNally]
The fight-back really starts this weekend — because ever since Argentina, the Irish game has descended into a state of neurosis, with pundits, former players, as well as some current ones, worrying over the health of the provincial sides and the possibility of a trickle of players leaving turning into a flood.

“The first thing to remember is that guys have always left anyway. Leo (Cullen), Shane Jennings, Mike Ross and Eoin Reddan all helped Leinster win European Cups and all had spells in England.”

Yet all left before they were established internationals. Aren’t Marty Moore and Ian Madigan, who have signed contracts with Wasps and Bordeaux respectively, a little different?

Well, yes and no.

Both have broken into the Ireland team but, as Schmidt pointed out, neither man has yet to start a Six Nations game, Moore appearing off the bench 10 times, Madigan eight.

They are both trying to make themselves the starting player they want to be. Ian (by going) is leaving a door ajar for Paddy Jackson and Ian Keatley to potentially usurp him as the understudy to Jonathan Sexton. And we want that understudy putting him under as much pressure on Johnny as possible – so Ian Madigan might come back in two years’ time for the World Cup and there might be an opportunity for him there.

It doesn’t mean we slam the door on them at all. We keep an eye on them. But one of the key things is that we can manage their volume of training because we have a very small pool, we can manage their load and hopefully increase the longevity of their career. You know, sometimes young people are quite impatient and they want to get to where they want to be. I know Marty made the expression he would have liked to have made a different decision to what he did.

And I know a lot more players have stayed in Ireland than have left. But things have got tougher for us, in terms of holding onto players, because the Premiership have raised their salary cap, sterling is strong against the Euro at the moment and the French clubs have put some pretty big contracts out there globally. They are looking for players in positions they need to fill. It is difficult.

Most things are difficult in rugby. Like winning a third successive Six Nations title.