OLIVER Dingley is Ireland’s first Olympic diver in 68 years – no wonder the 23-year-old with Cork blood in his veins, who was snubbed for a place on Team GB in 2012, is getting excited ahead of his first Olympics in Rio this month.

Four years ago, Dingley competed in the GB Olympic trials for the London Olympics, finishing second, but unfortunately for him the diver who placed third was selected instead.

“I’ve taken the positives and put it into my Olympic adventure as well. So far, I’m riding that wave where everything is going well, and I’ve had a good few weeks going into the Olympic Games.

“There’s plenty of lessons I have taken from not just four years ago, but eight years ago as well."

He hasn’t let it faze him though, with Dingley taking bronze at the 2014 Commonwealth Games in Glasgow in the three-metre springboard event.

Following that, Dingley switched allegiance to Ireland and he hasn’t looked back since.

“It’s so surreal at the moment, the excitement,” Dingley said. “Ever since the Euros finished the excitement has rocketed. It’s all becoming very real, it has all come around very fast since I qualified in February.

“It’s been hard to maintain that excitement, and you have your dips, but all of a sudden it’s rocketed. The time is now flying by – life is short and I’m living every minute of it.

“The excitement is really amazing and the Irish public are really starting to get behind it. The buzz is really going on social media and the papers, and to be a part of that small minority who get to compete in an Olympic Games is going to be mind boggling and I am very lucky.”

While obviously focussing on his event, which comes a little over midway through the Olympics, Dingley is also particularly excited about taking part in the Opening Ceremony.

“I’m lucky enough that I will get to do the Opening Ceremony in one of the most iconic football stadiums in the world!

“In the carnival setting of Rio I’m sure that they are going to throw on a great party. To walk out onto a stadium of 90,000 people and a huge TV audience around the world is a dream come true.

“It’s giving me the tingles just thinking about it.”

Reflecting on missing out on London 2012 – Dingley says it was a disappointment, but he has turned things around since.

“It was obviously a disappointment, but it was a lesson,” he said. “I am still very young in my sport. You hit your peak about 27, and I’m 23 now so I still have many more years to go. 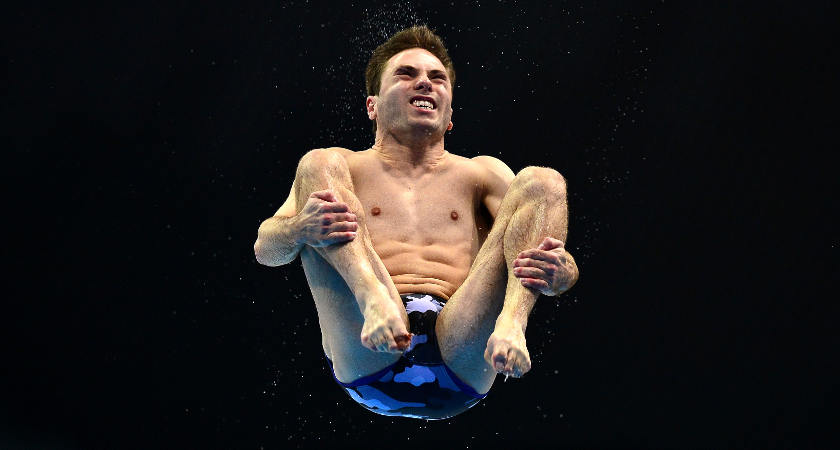 Oliver Dingley in action [Picture: Getty]
“That was always a learning curve, and I am very proud and very happy of where my path has taken me. I’m very, very proud to be a part of Team Ireland, and proud to be part of a strong Team Ireland.

“Not only being a part of Team Ireland, but also becoming a part of the Olympic family. I am one of the lucky ones who get to do it.”

10 days in, Dingley will face into the Preliminaries in the Men’s 3m Springboard – an outdoor event he hopes will last for two days, culminating with the finals on Tuesday, August 16.

“It’s been a four-year cycle of hard work and pain, and enjoyment at the end of the day,” he said.

“I’ve everything I need at the National Sports Campus in Dublin – amazing facilities and I’m very lucky to live there also.

“The Institute of Sport is absolutely phenomenal and also the NAC. It is pretty much the most exclusive gym in the country - I was in there not long ago with Robbie Keane, Shay Given and others – Katie Taylor as well – just rubbing shoulders with those type of people is absolutely amazing.”

What would Dingley feel would be a good result at the Olympics for him?

“Every athlete aspires to get an Olympic medal, but we have adopted a bit of a philosophy - especially in diving, it’s one of those sports that if you focus too much on the outcome and you miss by a fraction of a second – that’s an Olympic medal gone, or a semi-final or final place gone.

“We just try and think of it as one dive at a time. Whether that dive is good or bad you then throw it to one side and move on to the next dive – that’s what we did when I was qualifying for the Olympics.

“We’ll take it one dive at a time, and hopefully that’s good enough to get through to the next round.

“I get to Rio on August 2 and I don’t compete until the 15th. I don’t know what to expect, but it’s so exciting.

“Hopefully I get to enjoy moments like the Opening Ceremony – it would be a shame not too; before the lead up to the competition.

“The Olympic Ceremony is one thing, but 10 days after that I get to fulfil a lifetime dream, which I have been thinking about since I was a 7-year-old watching those people on an Olympic diving board.

“For me, the Olympics is the pinnacle. I might be biased, but I think it’s bigger than the World Cup."