IRELAND got their hands on the Cormac McAnallen Cup after overcoming Australia on a scoreline of 56-52 after an entertaining International Rules Test at Croke Park on Saturday.

For the hybrid sport, which is contested between top Gaelic footballers in Ireland and professional athletes from Aussie Rules, this was a memorable contest for all the right reasons as it never once threatened to spill into the violence that has marred previous matches between the sides.

In the closing stages, it was a very tense affair, as a kick of the ball was all that separated the teams, but it hadn't been that way throughout.

Ireland started very well and within four minutes had scored the first six-pointer of the game. A low mark taken by Diarmuid Connolly was quickly played inside to Conor McManus, who then lofted the ball to within 14 yards from their opponents' goal.

Bernard Brogan broke the ball into the path of the onrushing Aiden O’Shea who kicked first time to the net. It was a score which would settle the Irish side and they went on to dominate the opening exchanges.

During this period, the men in green worked to a game-plan that paid particular attention to ensuring each kick-pass went to hand, which thwarted the Australian players’ efforts to make big hits and turnovers.

The O’Shea goal was added to with three-pointed overs from Connolly, McManus and Brogan, with the latter two a constant thorn in the side of the Australian defence for most of the game.

Ireland led 21-13 after the first period and they continued in this vein throughout the second quarter.

Australia narrowed the gap to six points when Aiden O’Shea kicked to the net once again. O’Shea, who was the dominant force at midfield through the contest, broke behind the Aussie cover and fed Bernard Brogan, whose goal-bound shot was excellently saved by Dustin Fletcher.

However, O’Shea was on hand to pick up the rebound and struck the ball left-footed to the net. 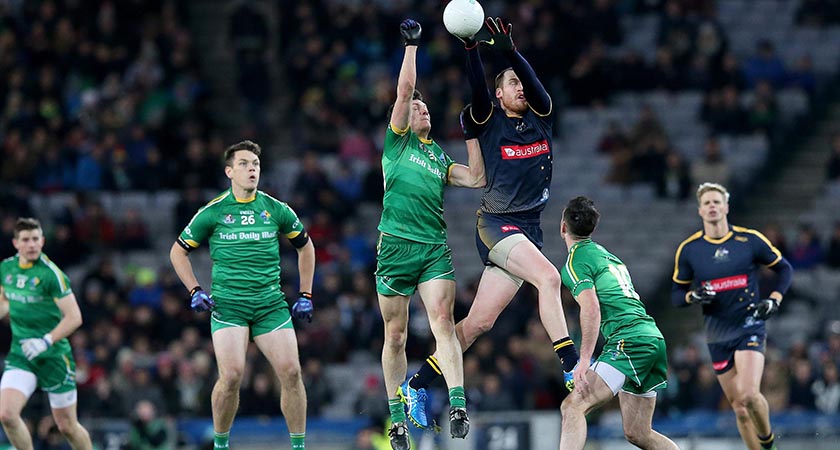 Ciaran McDonald and Jarryd Roughead in an aerial challenge [Mandatory Credit ©INPHO/Ryan Byrne]
Australia again brought the lead back to six when Ireland kicked on once more with Brogan and McManus adding scores. Ireland then extended their lead when McManus scored a goal from a penalty after Paddy McBrearty was dangerously pushed into the posts.

Vice captain Lee Keegan of Mayo kicked Ireland into a huge 20-point lead with an over that saw the scoreboard read 43-23 at half-time.

However, in the third quarter Australia almost completely took over and slowly began to get some traction on the scoreboard. Nick Riewoldt was instrumental in this comeback with two successive overs that saw the gap narrow to 11 points by the end of the period.

With one 18 minute quarter to go, it seemed the professional players of Australia might produce a stronger finish to the game. Eddie Betts and Robbie Gray kicked overs to cut the lead to eight, before Conor McManus kicked an over for Ireland after Brogan went close to scoring a fourth goal.

However, with five minutes left on the clock, Betts fisted the ball into the Irish net for a six-pointer, which was followed up with another Gray over. It left just three points separating the sides with four minutes remaining on the clock.

These last minutes were both tense and exciting for the 40,000 spectators as both teams pushed for the victory. Clare’s Gary Brennan fielded his third high catch of the quarter during this period and a late Brogan one-pointer sealed an International Rules triumph for the home side.

Aiden O’Shea: The Mayo colossus dominated the midfield for most of the contest and got forward to score two six-pointers.