NEIL FRANCIS usually writes good pieces about rugby and at the weekend he wrote a great one.

His column in the Sunday Independent got the heart of why New Zealand are such an all-conquering rugby force. Via Bill McLaren and Field Marshal Erwin Rommel he explained the breath-taking Kiwi fighting prowess.

Usually sports writing that indulges in war metaphors is trite and hideously overblown. This, though, was a rare article which managed to show you how sport reflects the world and its greater truths instead of being merely a beautiful distraction from it all.

Francis wrote: “Genetic disposition, superior group intellect, cardiovascular and muscle skeletal advantage, fast twitch muscle groups in their islander players, a killer instinct, greater hand-eye or anticipatory skills – either way they have 'it' on us and every passing year we seem to either improve or disimprove with the tide. The tide being the mark of excellence set by the All Blacks.”

What’s particularly arresting, for me at least, is not the notion that the Kiwis are made of the right stuff – it’s the assertion that, by comparison, we are made of the wrong stuff.

The day after the game, our latest in a century-plus of losses to New Zealand, I am still distraught by the outcome.

To be honest, I didn’t think it I still had it in me to be so disappointed by a game involving nobody that I know.

I believe that it is, at the very least, undignified for an adult to allow a result of a match to affect their mood for longer than a few minutes after the last whistle. There are far more vital things to be concerned about. I keep telling myself that, but the hurt won’t go away yet. 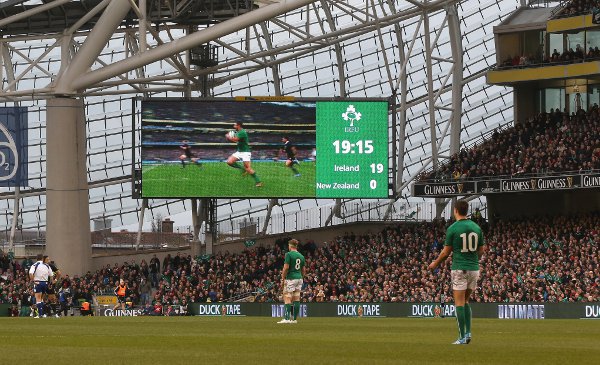 Ireland had amassed a stunning 19-0 lead in the first half. Photo: Getty Images

Jonathan Sexton had a kick to win this match. The kick was routine for anybody of professional place-kicking standard. Even a half-decent 14-year-old would expect to slot it. But Sexton missed.

I’m ashamed to admit it, but I’m well pissed off with Sexton. Do I have any right to be angry with him? Absolutely not. He is a dedicated athlete who has worked tirelessly to become Europe’s most sought-after out-half. I’ve done nothing at all of sporting note. I couldn’t even begin to imagine the toil and single-mindedness, allied to talent, it takes to get to where Sexton is.

The thing is, I knew he was going to miss.

I knew because if I had to take that kick – or more appropriately, if I had to perform a routine work-related task and in the process allay a century-long curse and ignite all Heaven to break loose, I would have missed too.

Sexton was taking all day to kick the ball. You could hear the voices in his head from across the Irish Sea.

The difference between an eight-point lead and five-point difference, with five minutes to go, was crucial. The All-Blacks were going to have possession at least one more time. Being the All Blacks, there was a decent chance they would get over for a try. So this was the kick for the win. This was the moment … And it slipped past the near post, almost apologising for itself as it went.

Abraham Maslow and Frank Manuel came up with the Jonah Complex – or a fear of success. 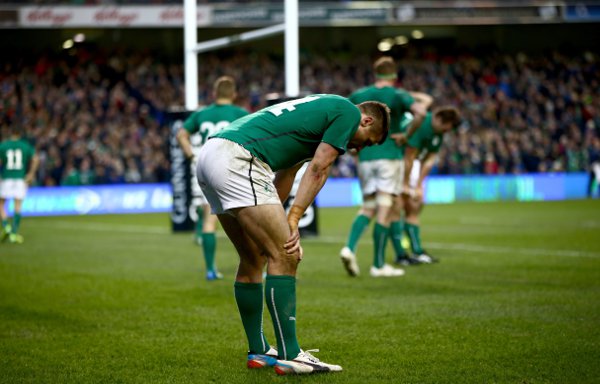 A dejected Tommy Bowe after New Zealand scored the try that preceded a winning conversion. Photo by Phil Walter/Getty Images

They might as well of been talking about Irish sport, rugby in particular. How often have our team been denounced as pathetic, only to roar back with a performance of feral nature, raging against the audacity of friend and foe who have dismissed their skill and strength of character?

And how many times have we choked when on the threshold of realising the spoils of such outstanding performances?

Off the top of my head, I’m thinking about conceding to Australia moments after Gordon Hamilton had started a riot between the corner of the North Terrace and the West Stand of the Old Lansdowne road.

Then there was the 2011 World Cup: Australia dismantled before a limp display against Wales in the quarter-final. Even our finest hour, in Cardiff in 2009, was almost ruined after Wales were presented with a penalty and a kick to win at the death.

Those looking for positives from this performance won’t have to look far. A pessimist though, and who could be anything but today, will point to the likelihood that Ireland can’t play like this every time.

For sure, base line performances can improve – but not to this level. Forwards such as Sean O’Brien, Jamie Heaslip, Rory Best and Paul O’Connell and backs like Gordon D’Arcy and Rob Kearney were animalistic in their pursuit of opponent and possession. These efforts can be replicated a couple of times in a career, not every other Saturday.

Brian O’Driscoll again suffered concussion. He is the victim of his own bravery and should not be allowed to play anymore. He should have been retired in the summer and no game is worth jeopardising his future health over.

But, then, no game is worth being so miserable over. This, though, this feels like something so much bigger than a game. That, I suppose, is the glory and the cruelty of sport.