Ireland: a country without a league?

IN THE neurotic world of Irish football, those who worship in the League of Ireland’s church often feel as marginalised as The Free Presbyterians, believing theirs to be the one true God while raging against the dissenters, the pagans who assert that ‘Ireland has no League,’ unlike the blessed Swedes and Austrians.

That Giovanni Trapatonni would follow up his insult by picking five League of Ireland graduates to play against Austria only added to the sense of persecution. Yet motivated by a desire to excuse his failings, Trapatonni was happy to put up with a localised squabble if it meant the protection of his legacy.

“Ironically, part of that legacy is that he has picked more players who’ve played in the League of Ireland than any other manager since Liam Tuohy,” said David Forde, one of the LOI alumni, among 13 others, Seamus Coleman, Damien Delaney, James McClean, Noel Hunt, Wes Hoolahan, Kevin Doyle, Shane Long, Conor Sammon, Keith Fahey, Stephen Ward, David Meyler, Daryl Murphy and Paddy Madden, all of whom were capped under Trapattoni.

Yet while their maturation from rough diamonds into finished articles suggests the future of both the League of Ireland and Irish national team are safe, you can’t be so sure.

The bulk of the above players were earning a corn in the League of Ireland at a time when the Celtic Tiger was roaring and full-time football was the expensive hobby of businessmen with time and money to burn.

Then the recession came, the businessmen and their money disappeared, part-time replaced full-time and a firesale began – Hoolahan leaving for €20,000, Ward for €125,000, Sammon for €40,000.

Still, the emergence of so many players from a much-abused League into the Premier League and international football clearly provided an injection of credibility, no more so than the consistent run of European results which saw Irish teams conquer middle-ranking European nations on a regular basis – including four teams from ‘a country with a League’, Sweden.

“I could laugh,” said the St Pat’s manager, John McDonnell, “when I heard Trapattoni say what he did about our League. This guy turned up in Ireland when he felt like it – offered nothing to the domestic game, took his money and never realised how he got it.

I managed St Pat’s against Elfsborg. We beat them and Keith Fahey played Anders Svensson off the park, five years before Svensson turned up in the Aviva to score the winner against Ireland. No League? Give me a break.”

From 2004 to 2006, the League of Ireland got its first big break. For once, all the planets were aligned, as investors decided it was a product worth spending on, as the flow of player traffic came inwards rather than outwards, as managers dared to dream.

The FAI too were looking at the bigger picture – inserting a coach education plan that demanded every Premier Division manager had to gain his UEFA Pro License certificate. “A lot of us are football geeks,” laughs McDonnell. “We want to get better and are still open to learning as much as we can.”

And the upshot was that the League – in three quick years – underwent its quiet revolution. Gone were the days of 4-4-2 and pot-bellied midfielders. The geeks had taken over. Full-time football was the rage. Only one manager in the Premier Division was aged over 42.

There was a new philosophy, a new summer soccer season, a new breed of player. Full-time teams met full-time teams on a weekly basis at home and when the European campaigns began, they weren’t underprepared.

Instead, they took scalp after scalp – a Serbian side one year, a Russian team the next, a couple of Croatian clubs, four from Sweden, two from Scotland and sides from another 20 European countries.

“We were varying our tactics at home,” says McDonnell, “knowing we needed to outthink our opponents to get an edge. Then, in Europe, we were ready. Nothing fazed us. We’d a good League.” 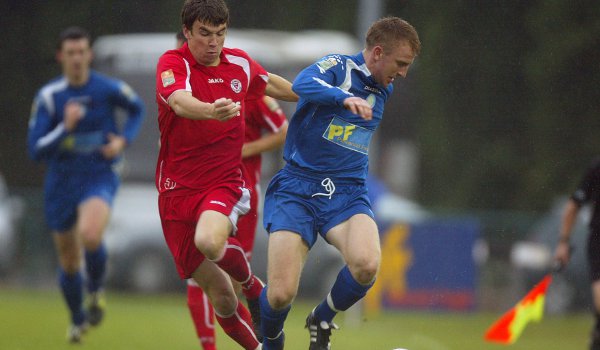 English and Scottish clubs agreed. After Kevin Doyle made his immediate impact at Reading, the scouts had an easy sell. Here were decent, young, professionals available at knockdown prices. Ireland’s clubs – fearful of handing out long-term contracts – were powerless either to retain their talent or hold out for a better deal.

Around the same time, the boom was coming to an end and Lansdowne Road was becoming the Aviva Stadium. The FAI had costs to meet – and despite calls for them to bail clubs out and introduce central contracts, as the IRFU did with its provincial teams, their priority was the stadium. “It’ll be a toll and a pension for Irish football,” said John Delaney.

Instead, it has become a financial drain.

With this financial avenue closed off, and with the investors burned, the whole full-time experiment headed south.

“You can’t really blame Irish businessmen for looking to clubs in England or Scotland,” says Forde. “All you have to do is look at the terraces. Too many of them are empty. If we expect people to make an investment, you have to accept that they will be looking for a return.”

And that hasn’t happened. Nor is it likely to in the near future. If you are to support a League of Ireland club, you need the capacity for forgiveness, to put up with the abysmal facilities and the inaccurate passing. Far too few are willing to forgive, though.

The full-house signs have gone up in Irish grounds just three times this season – even in a year when Dundalk have emerged from the abyss, filled with a trio of players – Kurtis Byrne, Richie Towell and Pat Hoban – who, with a lot of luck and hard work – have the potential to become full internationals.

Nor are all the bright young managers still around.

Stephen Kenny may be working the oracle at Dundalk and McDonnell at Shelbourne but Pat Fenlon, the best of the lot, is now at Hibs.

Northern Ireland head-hunted Michael O’Neill from Shamrock Rovers, the Irish Under 19s acted similarly with Paul Doolin while Pat Dolan has turned down work for nine years now, preferring the dark world of football agency to the insecurity of management.

It’s an awful shame too – because it was Dolan who unearthed Doyle and Long, Dolan who outthought Neeskens and the former Croatian coach, Zlatko Kranjcar, when he was in charge of Rijeka.

“If people stopped to think, they would see that the League of Ireland is another source of players for the national team,” Dolan says. “The national team manager would have more numbers to choose from.”

Without investment, though, there can be no full-time football.

And without that, there probably won’t be another generation of Doyles and Hoolahans. Significantly, Yeovil’s Madden and Hull’s Meyler are the only players to step up from the League to international football since the boom ended.

Even more significantly, Ireland was the only country at Euro 2012 who didn’t have a player in its squad employed in its domestic League.

And all the while, foreign banks receive interest payments from the FAI just so we can boast that, at last, Irish football has a home of its own.

Without players to play in it, though, punters won’t pay to fill it.