Irish boxing in 2016: from hard knocks to golden glove victories

FOLLOWING the fortunes of Irish boxing in 2016 was no smooth ride.

High drama, bitter disappointments, nights of world-class entertainment, and bouts of controversy were all served up in healthy portions.

The future of professional boxing in Dublin was thrown into turmoil, Christ the Redeemer cast a long cold shadow over the amateur game and Carl Frampton clawed his way to the summit of the sport.

There is no shortage of material to get your teeth into when looking back on a memorable year inside the Irish ring.

Shooting at the Regency Hotel

Traditionally pro boxing’s ‘off-season’ in January only served to prolong a miserable end to 2015, which saw Andy Lee lose his world title.

February however promised to be the most action-packed month of Irish boxing for decades.

A triple-header of shows in Dublin and Belfast and Carl Frampton’s long-awaited clash with Scott Quigg topping and tailing the shortest month.

Enigmatic undefeated heavyweight Sean ‘Big Sexy’ Turner was to top a bill packed with Celtic Warrior Gym fighters on February 2 and the following night would see their second show, dubbed the ‘Clash of the Clans’, at the National Stadium.

With a live television slot on BoxNation, the ‘Clash of the Clans’ bill captured domestic fans' attentions.

Optimism abounded. It was hoped this would set the tone for 2016.

But just as those grey January clouds were lifting, Irish boxing was plunged into chaos when gang of men, some of whom were carrying AK-47 rifles and disguised in police uniforms, burst into the ‘Clash of the Clans’ weigh-in at the Regency Hotel near Dublin Airport.

Fans, officials and semi-clad boxers dived for cover as the men opened fire in what was reported to be the latest episode of a gangland feud.

One man was fatally injured and the incident made unwanted headlines around the world, as shock waves reverberated through the boxing community.

Both Dublin shows were cancelled and though the Belfast bill went ahead, with Hughes ending Fryers’ unbeaten run, many wondered if there was any way back for pro boxing in the south. 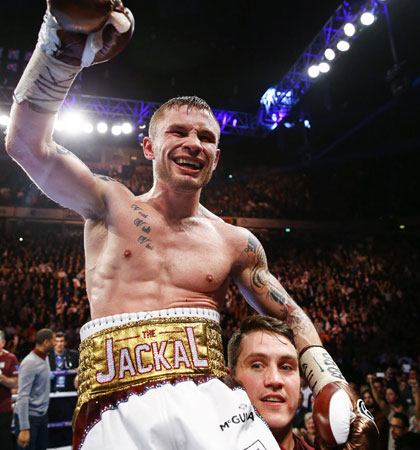 Debate raged among fight fans about who was the best super-bantam in Europe – Belfast’s Carl Frampton or Bury’s Scott Quigg?

Despite clashes of personality and arguments over a share of the purse, tickets and television deals, both agreed to lay their respective IBF and WBA world titles on the line at the Manchester Arena on February 27 on SKY PPV.

Quigg enjoyed a height and sizeable reach advantage and much had been made of his drive, determination and dedication in the build-up, but Frampton possessed the raw power and natural talent.

Humorous and at times barbed press conference quips whipped the crowds up and encouraged thousands of fight fans to travel in huge numbers to support the Tiger's Bay tornado.

Buoyed by this, the Irishman burst out into action and bossed the opening half of the largely cagey encounter.

Quigg struggled to keep up with the squat Belfast fighter’s raiding attacks and was made to look sluggish.

The Jackal’s pace dipped in the second half of the fight as an emboldened Quigg finally came out of his shell.

With Frampton a streak ahead on points the fight the Bury fighter threw the kitchen sink at his opponent in the final rounds.

It was too little too late.

Frampton had out-thought, outfought, out-boxed and finally outlasted a much too cautious Quigg to earn a split decision points victory and put the rivalry to bed.

There was an explosion of Irish fighters plying their trade across Britain in April, providing us with two Fight of the Year contenders, two Irish title fights and two careers drawing to a close.

The pair previously fought in the Prizefighter competition, and fans eagerly anticipated another mouth-watering mesh of aggressive styles in the rematch.

The Dubliner then rushed in to finish the job off but Doran soaked up the blows and countered with a swift left to crumple Keeler to the canvas, who was saved by the bell at the end of an action packed first fight.

The minute break between rounds wasn’t sufficient respite for Keeler and Doran earned the stoppage early in the second after Keeler’s trainer Pascal Collins threw the towel in.

The fight started slowly but developed into a scrappy but very watchable battle with Mullingar’s McDonagh having his hand raised after 10 tough rounds.

It was the last-chance saloon for Macklin, who looked to regain the form which saw him rise to become a three-time world title challenger.

Victory came via an ugly points decision. Despite this Macklin would announce his retirement in May.

One of the most exciting fighters for a decade, the ‘Tipperary Tornado’ won an Irish, British and European title and before being robbed of his world title in 2011 by questionable judges scoring against Felix Sturm in Germany.

It was Maughan’s second bite at the cherry having previously been stopped by Dee Walsh in Belfast.

He suffered the same fate again with the vociferous ‘Upton Clan’ roaring Pauly on to a sixth round stoppage. 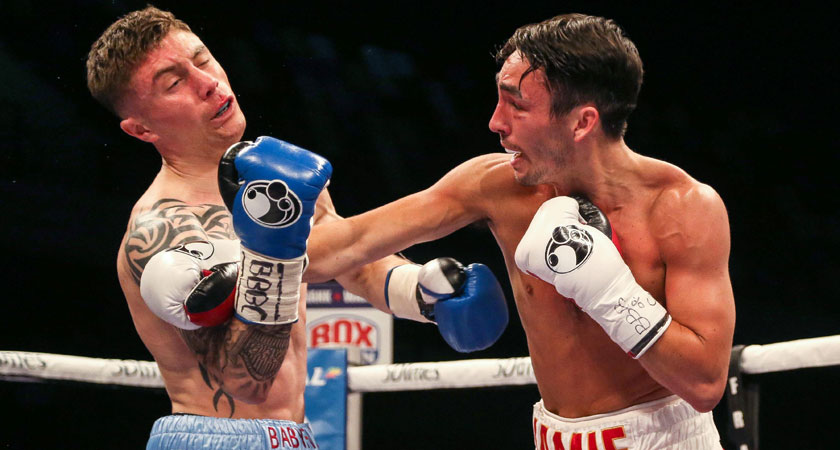 Jamie 'The Mexican' Conlan rounded the month off with my Fight of the Year.

Conlan dropped Nelson with a sweet left to the bread basket in the first minute of the fight.

Fighting with a bad gash, the Mexican then had to haul himself off the canvas in the third round.

Nelson’s comeback looked set when he shook Conlan to his core in the seventh, only for the Belfast lad to astonishingly turn the tables again and stop Nelson in the following round.

It was a largely quiet summer with the focus on the upcoming Olympiad and Carl Frampton’s return.

Belfast’s Tommy McCarthy won a British title eliminator over Jon-Lewis Dickinson in May and thankfully pro boxing returned to Dublin with a Frank Stacey-promoted bill at the National Stadium in June.

The Lilywhite Lightning made a successful debut bow on Stacey’s 12-fight show and is looking for an Irish title fight in 2017.

The Jackal, riding high off his unification victory over Quigg, was looking to solidify his legacy.

Standing in his way was California-based undefeated three-weight titleholder Santa Cruz, who is one of the most popular TV fighters in America with a large Mexican fanbase.

It was a mouth-watering pick ’em match between two aggressive undefeated fighters – exactly what boxing needed.

Again Frampton made a quick start, rocking Santa Cruz with flurries and sending ‘El Terramoto’ crashing against the ropes.

Santa Cruz settled into the fight in the second half but it was the Belfast fighter that dished out more punishment until the pair reached the championship rounds, when Santa Cruz clipped the Jackal with a powerful overhand right in the 10th round.

Santa Cruz’s strong finish wasn’t enough to deny Frampton capturing the belt his mentor Barry McGuigan won in 1985, and he became a two-weight champion, only the second Irishman ever to do so.

We look forward to the rematch pencilled in for January in Las Vegas.

Irish tails were up going into August’s Rio Olympics. We sent arguably our strongest-ever team and medal hopes were high for the eight-fighter squad.

Before a glove was thrown we were down to seven after Portlaoise middleweight, Michael O’Reilly, was dumped out having tested positive for a banned substance. It wouldn’t be long before we lost more.

Brendan Irvine lost in his first bout, David Oliver Joyce, Joe Ward and weight-drained Paddy Barnes all fell at the Round of 16. 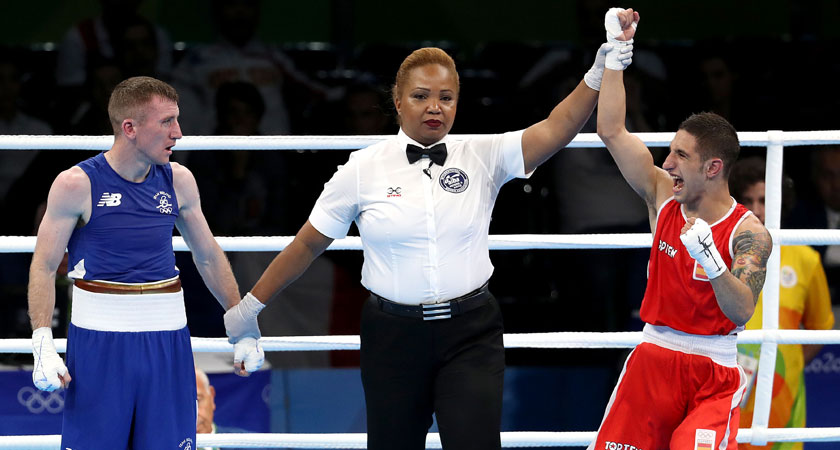 There was disappointment for Paddy Barnes in Rio (Image: inpho.ie/Dan Sheridan)

Only welterweight Steven Donnelly managed to string together two victories before he was beaten in a close contest against highly-rated Moroccan Mohammed Rabii.

With only two boxers left in the competition, the media back home argued that the team missed Billy Walsh’s guiding hand; the boxers were largely dismissive of this viewpoint.

Up stepped Katie Taylor, our golden girl, who held a stranglehold over her division for a decade.

Surely normal service would resume. She only needed a single victory over Finland’s Mira Potkonen to gain a medal.

From the first round it was plain to see a turbulent year for Taylor in and out of the ring weighed heavy on her shoulders.

Taylor boxed well and for me edged the fight; the judges disagreed and Taylor exited, losin on a split decision.

The Bray boxer broke down in her post-fight interview and the public melted after finally seeing a chink in Taylor’s usually impenetrable defence.

One left! Who better to be last-man-standing than Michael Conlan? 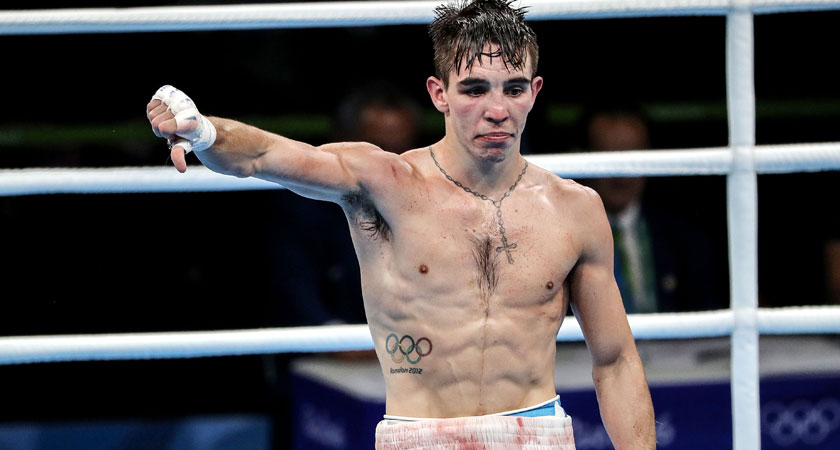 Ranked number one in his weight and the only Irishman to ever win a gold at the World Championships.

The Belfast bantam coasted through his opener with Armenian Aram Avagyan to set up a quarter-final contest with Vladimir Nikitin of Russia for a guaranteed bronze medal.

Despite this the first round was scored to Russian, much to the audible dismay of the crowd at the Riocentro.

Conlan then went on the front-foot for the final two rounds in an attempt to take the decision out of the judge’s hands.

Even this was not enough. Conlan lost 29-28 across the board.

His single-finger salute to the judges became one of the images of the games, and his emotional expletive-laden post-fight interview to RTÉ jerked AIBA into taking action with regards the judging of the Games.

This was not the petulant, brattish lashing-out of a biased boxer who was on the wrong end of a close decision – Conlan won all three rounds on my card, comfortably, and was robbed of a medal in Rio.

Perversely the exposure he gained as a result of this mugging catapulted him to the front pages of mainstream media and should benefit him in the long run.

The fallout from the Olympics was swift; acrimonious fingers pointed in various directions.

It looked certain the IABA would lose their ‘Holy Trinity’ of Barnes, Conlan and Taylor to the professional code.

Barnes was the first to sign terms. Teaming up with MGM Marbella and Frank Warren he made his hometown pro debut in November, earning victory in bizarre fashion with his opponent being disqualified.

Next out of the traps was Conlan. The high-profile bantamweight was courted by most of boxing’s leading players, but it was Bob Arum’s Top Rank who sealed his signature with a sizable signing-on fee.

Arum has big plans for the charismatic fireball who will make his pro debut in New York on St Patrick’s weekend. 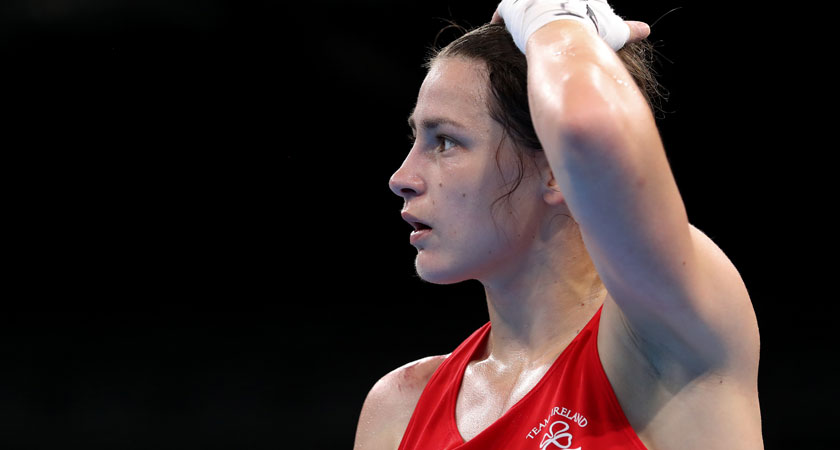 Basing herself in America with new trainer Ross Enamait, she quickly followed up with a second in December on an Anthony Joshua undercard to cap off the Irish boxing year.

Hearn sees Taylor as boxing’s Ronda Rousey and she will appear on some massive undercards in 2017, including that of Gennedy Golovkin at Madison Square Garden in March and the clash of Anthony Joshua and Wladimir Klitschko at Wembley Stadium in April.

With the ‘Holy Trinity’ signed up and ready to flourish on the pro scene, new promoters like FS Promotion and Red Corner active in Dublin and Mark Dunlop and Alio Wilton ploughing ahead in Belfast, the outlook for Irish pro boxing is very bright.

Meanwhile, IABA and amateur boxing have some rebuilding to busy themselves with. 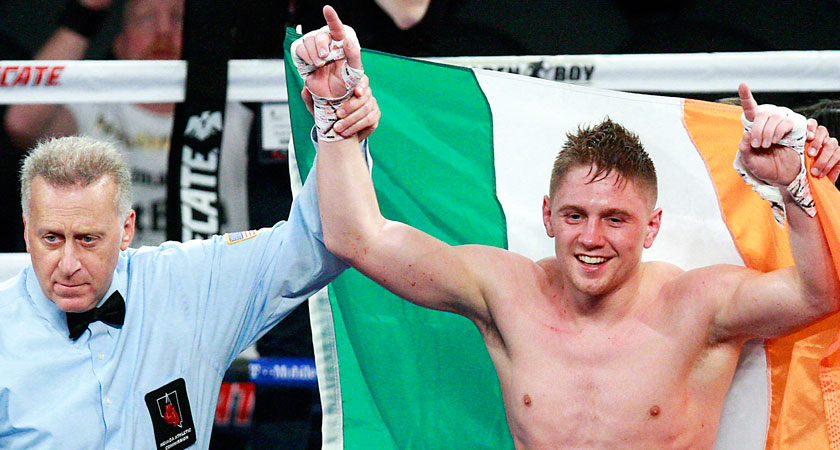 Jason Quigley is our prospect of the year (Image: inpho.ie/Eoin Mundow)

Fighter of the Year: Carl Frampton

Prospect of the Year: Jason Quigley

Fight of the Year: Jamie Conlan vs Anthony Nelson

Knockout of the Year: JJ McDonagh vs Jake Ball

Newcomer of the Year: Katie Taylor