Stringer in action with former teammate Paul O'Connell in 2006

TODAY is Ireland and Munster Rugby legend Peter Stringer’s 39th birthday – but one birthday message is standing out from the rest.

The Press Association Sport Twitter account made a gaff this morning after they wished Stringer a happy 39th – only to mistake him for former teammate and bald-headed comrade Paul O’Connell.

Stringer made 98 caps for Ireland in a memorable career which saw him achieve grand slam success in green in 2009. 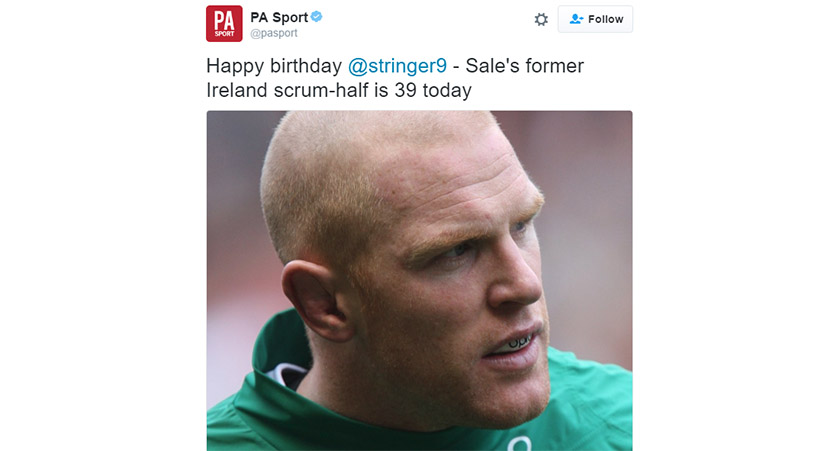 The diminutive scrum-half still plies his trade in the Premiership for Sale Sharks despite being of an age when most in his position have long since retired.

O’Connell bowed out earlier this year after suffering a career ending injury during the Rugby World Cup, despite just signing for French champions Toulon.

The pair might share a similar haircut, but that’s about where the similarities between the two end. At 6ft 6 O'Connell towers over a 5ft 7 Stringer.

Peter Stringer was quick to see the funny side of the mistake, and poked fun on Twitter at his former teammate with whom he won two Heineken Cups for Munster.

O’Connell made headlines recently after he pulled off possibly the greatest ever moment on BBC Question of Sport quiz show.

Any excuse to show this again…