Match report: France scrum their way to victory over Ireland in Six Nations

IRELAND lost to France on Saturday by the narrowest of margins amid a contest they seemed to have under control for the first hour.

For those opening 60 minutes at the Stade de France on Saturday, Ireland dominated possession and territory and led by six points. They were full value for this lead as the visitors had the home side pegged inside their own half for long periods of the second-half with a bombardment of garryowens and incisive kicking from Johnny Sexton.

Yet during this period, the visitors could not convert their dominance into additional points, which consequently left the home side within striking distance on the scoreboard.

The match turned during a 10-minute second-half arm wrestle close to the Irish line.

Trailing by six, France turned down a kick at goal and opted instead to maul their way from a lineout five metres out. As the home side continuously pounded at the Irish line, France looked to have scored when No.8 Damien Chouly found himself over the line.

However, the grounding of the ball was not visible to either the referee or the TMO and a five metre attacking scrum was correctly awarded. What followed was the seminal moment of the game – France’s try.

In the first-half, the Irish front row of Jack McGrath, Rory Best and Nathan White had the better of their opponents, but the French plight at scrum time improved significantly when head coach Guy Noves introduced props Rabah Slimani and Eddy Ben Arous early in the second-half.

By the time France had this five-metre scrum opportunity, this turnaround in scrum ascendancy had become supremacy in favour of the men in blue.

Three successive scrum penalties against Ireland had referee Jaco Peyper on the verge of awarding a penalty-try and issuing a yellow card, when the highly impressive substitute scrum-half Maxime Machenaud fed full-back Maxime Medard to step his way over the Irish line for the game’s only try.

A routine conversion by Jules Plisson gave France a one-point lead with 10 minutes to go.

Ireland’s game-plan was obvious from the opening five minutes of the game, when Sexton launched two up-and-unders on top of French wing Teddy Thomas, whom Ireland identified was susceptible under the high ball. The second of these garryowens was fielded by Robbie Henshaw and Ireland were awarded a penalty, which they kicked to the corner as they looked to take the game to France from the off.

While this first foray didn’t yield a score, it was not long until Ireland took a 3-0 lead after indiscipline by French lock Yoann Maestri, who should have seen yellow, for a cynical late hit on Sexton.

Sexton and Conor Murray were both very much in form as Ireland continued to attack in waves as Joe Schmidt’s structured game-plan looked more suited to the conditions than the offloading game France were trying to implement. France were pinged for playing the ball off their feet and Sexton increased Ireland’s lead to six. 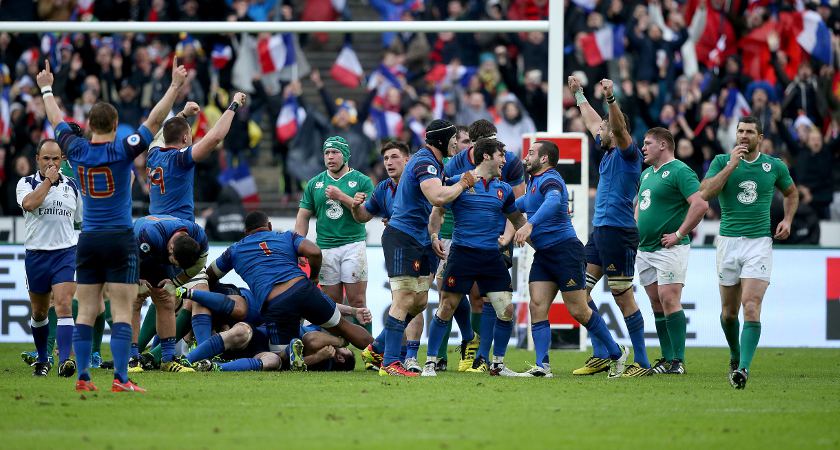 France's Maxime Medard gets over the line towards the end of the game [Picture: inpho]
The robustness of the tackling was certainly increased and the home side might have been further penalised had the referee seen a high hit on Dave Kearney, who had to leave the field with an injury soon after.

Plisson kicked France onto the scoreboard after Ireland gave away a penalty for not rolling away, but Ireland responded with an increase in their own tackling and at one stage the men in green forced the home side back 20 metres into their own half.

With half-time approaching, Ireland were awarded a penalty from a scrum which Sexton kicked over from the centre of the field. Plisson then missed a chance to add three to his side’s tally when he kicked wide on the half-time whistle.

The first-half had seen Ireland well on top as France’s offloading game broke down on numerous occasions. With Ireland getting the scrum decisions in the opening period, it gave them a platform from which to maintain their territorial advantage.

Within five minutes of the second-half, French coach Noves introduced fullback Hugo Bonneval on the wing in place of Teddy Thomas and most notably his two best props, Slimani and Ben Arous.

On a day that had more than its fair share of knock-ons, this change of fortunes at scrum time eventually won the game for the home side. Twice France got Ireland out of their ’22 in the second-half by winning scrum decisions.

However, it must be noted that when Ireland dominated territory and possession they could not engineer a clean break through the French defence and never came close to scoring a try. For the second week in a row, they could not keep the scoreboard kicking over when it seemed their opponents’ resistance was ready to break.

When France took the lead, Ireland had 10 minutes to fashion a kick at goal. But as Ireland tried in vain to win back possession, they conceded a succession of penalties as France comfortably closed out the game in Ireland’s half.

With Ireland now pretty much out of contention to retain their Six Nations crown in 2016, perhaps now is the time to experiment with an attempt to advance their brand of rugby in the remaining fixtures, although a visit to Twickenham to face England is next up for Schmidt’s men.