LONDON have finished bottom of the Allianz National Football League Division 4 following a 1-10 to 2-10 defeat to Wicklow at the Irish TV Grounds in Ruislip on Sunday.

In what was the final round of games in the league campaign, Waterford beat Leitrim 0-10 to 1-6 in Fraher Field on Saturday, meaning London ended up rooted to the bottom with just two points from their solitary win against the Déise late last month.

With two wins under their belt ahead of their trip to Ruislip, Wicklow were always expected to be hard work, and they made a big statement inside 30 seconds as Mark Kenny slipped in Mikey O'Connor to drill a left-foot effort past Exiles goalkeeper Gavin McEvoy.

London refused to let their heads drop and almost produced an instant reply as Mark Gottsche, playing further up field in the centre-forward role, set up Adrian Moyles for a goal opportunity, but the St Kiernans forward could only win a '45 after good goalkeeping by William Hender, a late swap for Robert Lambert in the Wicklow goal.

London got off the mark on seven minutes as Adrian Hanlon got the first of his three points, though visiting captain Rory Finn soon cancelled that out with a delightful free, defying the wind.

On 10 minutes, the hosts pulled level with a goal of their own, with Scott Conroy teeing up the onrushing Liam Gavaghan, who slipped the ball underneath Hender to make it 1-1 apiece.

For the remainder of the half, the quality of score-taking was very high, with Conroy cancelling out Kenny's point from play with a sublime free. A Finn free for Wicklow was then matched by a stunning effort from Hanlon, who used the outside of his left boot, with the angle against him, to notch his second point of the game.

Indeed, the sides continued to trade scores at will, with Wicklow never surrendering the lead, until the Garden County pulled clear with a goal on the stroke of half-time as Dean Healy bulldozed forward and netted from close range at the second time of asking after having his first effort saved.

Two scores from play from Darren Haydon, plus another free from Finn and a John McGrath point put Wicklow well in control with a double score lead of 2-10 to 1-5 on 45 minutes. However, they would go the remaining 25 minutes without a score, allowing London to creep back into proceedings. 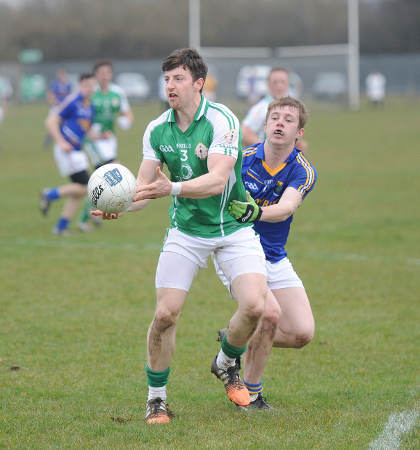 London's Ciaran Dunne in possession [Picture: Mal McNally]
With the infamous Ruislip wind blowing at an awkward angle, a few eyebrows were raised when Gottsche shaped to shoot from a free, off the ground from around 40 metres out. However, the Tir Chonaill Gaels man struck it beautifully to kick-start London's attempt at a comeback.

A raft of substitutes didn't do Johnny Magee's men any favours as Eoin Murray pulled another point back for London, but in the remaining 10 minutes the Exiles were guilty of failing to take their points when the option was there.

But for one chance for Gavaghan, which went begging, that elusive second goal never looked likely for the hosts, who topped off their scoring with a pair of frees from Conroy, taking the final score to 2-10 to 1-10 in Wicklow's favour.

After the game, London boss Ciaran Deely declared himself “happy enough” with the performance, but cited Wicklow's second goal in first-half injury time as the turning point in a competitive game.

“I thought the performance was good,” he told The Irish Post. “It was kind of a frustrating game, because I thought we performed better in that game than we did against the likes of Leitrim. We opened them up quite a lot of times but we only took one goal chance.

“That's a bit disappointing, because that game today was one we could have won. Our shot selection wasn't the best in the second-half. At times, we can be good at that, but today we went for a few shots that we shouldn't have that went wide, then we went for a few goals when popping it over the bar was the better option.

“But I think the losing of the game was their second goal just before half-time, it was a killer, and then just after half-time they got a bit of a run on us, and it was very difficult to come back from that.”