A LATE Louis Monaghan strike helped St Brendan’s secure their third All Britain U17  GAA football title as they saw off the challenge of St Kiernans in an epic cup final.

It was an emotional occasion for the Birmingham side on Sunday evening, coming only two days after the funeral of club stalwart Adrian McGee.

The players donned black armbands throughout the day as a mark of respect for the Detective Superintendent, who died in June.  And Monaghan dedicated the 4-13 to  4-07 win to the popular figure.

Speaking to the Irish Post, he said: "This means everything to our club.

“It has been a tough, tough day with so many fixtures to get through in that heat. But when we had to dig deep, we just thought of Adrian.

“Everything we put into that performance was for him. We’re taking that trophy home, and we know he is up there, looking over us.” 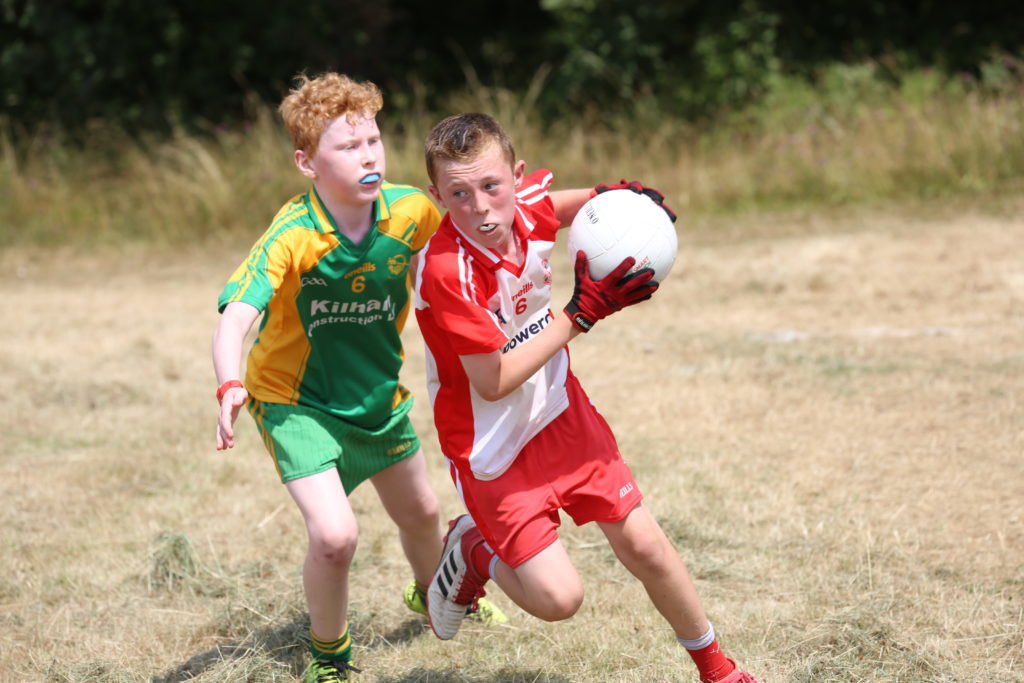 Action from this year's All Britain Championship (Photo by Brendan Vaughan)

That winning margin might look comfortable, but it was nip and tuck between the two sides for large periods of the game.

“St Kiernans pushed us all the way and we never felt we had it in the bag until very late on,” Monaghan admitted.

“It felt like there was only a point or two in it for most of the match. But we stepped up when we needed to.”

St Brendan’s -along with Sean McDermotts- are traditionally two of the stronger teams in Warwickshire. That creates a healthy rivalry, but such considerations are parked on occasions like these.

Monaghan said: “Games against Sean Macs are always big occasions for us. But at this sort of tournament we all come together – we want to beat the London teams!”

St Brendan’s coach Finbar Geraghty also paid tribute to St Kiernans and said it is now his aim to organise more fixtures against them and other London clubs.

“We love coming down here, facing the likes of St Kiernans, Parnells and the other good sides in London,” he said.

“And I think they love having us here too. Because it pushes them on and raises the standard. Even after the final, one of their representatives came up and asked they said can ye come down and play us again.

“That’s what our friend Adrian McGee was all about. Yes, the competitive element is important, but it is the friendships you develop from occasions such as this. He always stressed that. Adrian’s father was one of the founders of St Brendan’s. It is our 60th anniversary this year and it is nice to be a part of the club’s history by doing what we did today.”

It was a role reversal on Saturday evening, with Tara overcoming Sean McDermotts of Birmingham in the Under 15 football cup final. 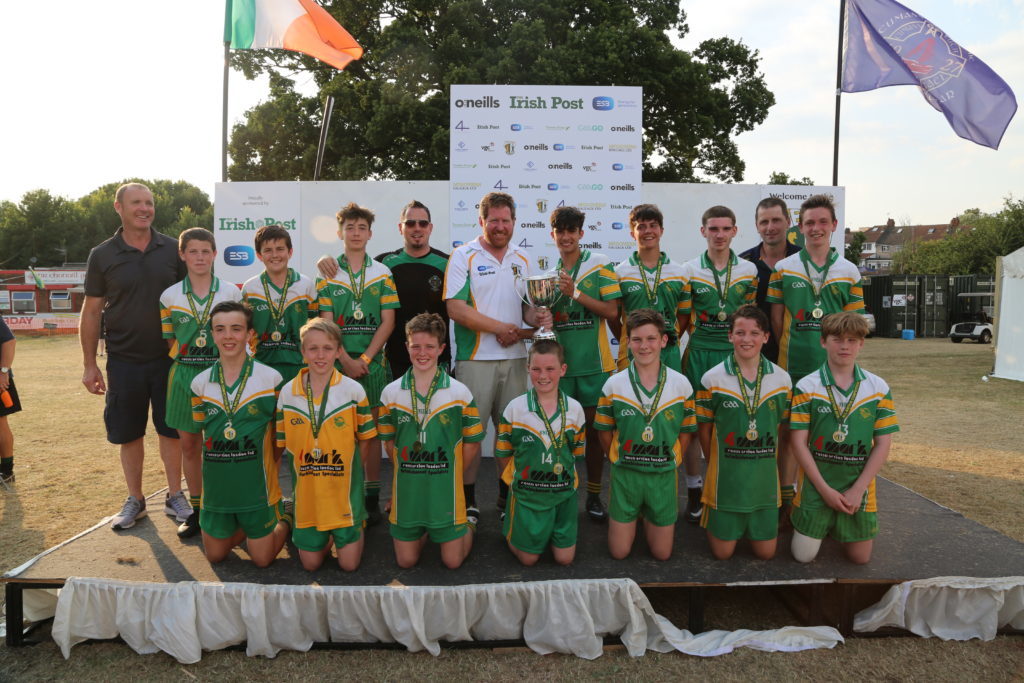 The sides couldn’t be divided at full time, but the London side made it a day to remember and came out ahead 5-14 to 4-13 in another thriller.

“We played them in the group stage and we knew what they were going to be about,” said winning Tara captain Louis Setoudeh.

“They were a good side, and the team to beat, as far as we were concerned. It was all about overcoming their technical ability.”

Birmingham's Erin go Bragh secured three hurling titles at  U8, U11 and U13 level, and it was a memorable hat-trick for Tara of London on Saturday, with success in the U15 football cup final augmented by success in the U12 Girls cup and U11 Boys cup. 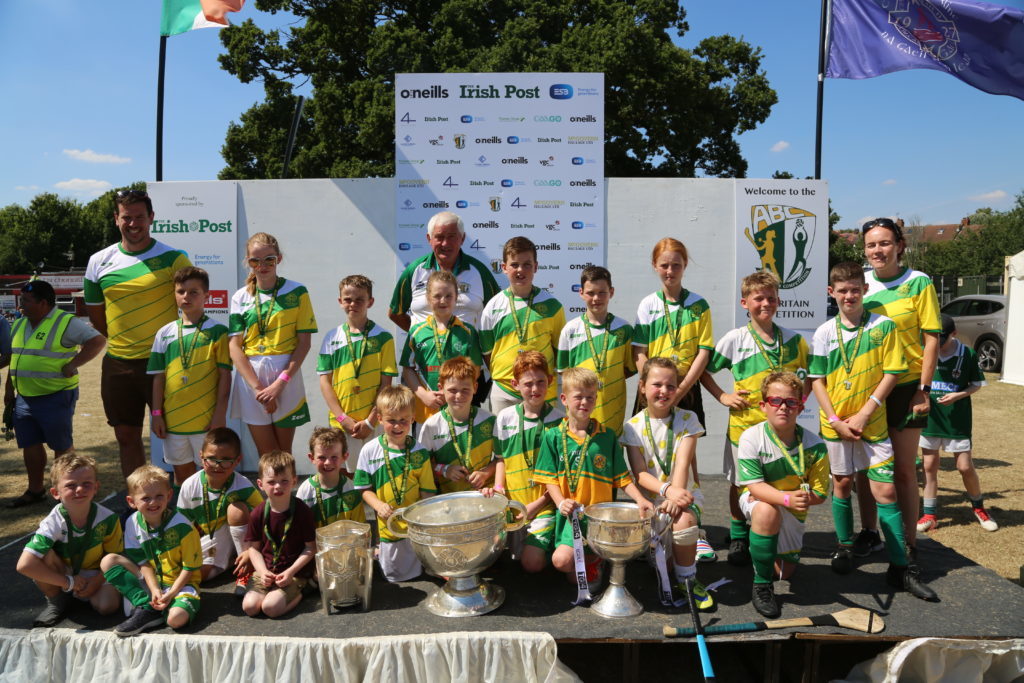 “Managing the conditions and the heat today was a challenge. They are young lads, in an open space and all they want to do is be out and kick a ball.

“So them into the tent and get them out of the heat and get water on board and fluids on board but they listened.
“Years ago, if we were playing at these type of events, they would be chasing about all day.

“We learned today to conserve our energy. We had enough in the tank when we went to extra time in the quarter final and the semi final. And that stood to us for the final.”

Murphy believes the future is bright for this current crop and hopes they will persist with the sport, regardless of modern-day distractions.

“I have looked after these boys since the age of five. And followed that all the way through. The majority of them are off to high school now, so I hope they carry on.

“They’re getting to the age where there might be obstacles to that. But if they stick with it, they can play a big role for the club over the next few years.”

Boston trip will bring out the best in St Brendan’s

Pics Of The Week