FOLLOWING Ireland's stunning goal by Robbie Brady, which clinched Ireland's 1 -0 victory against Italy in Lille at the Euros in France, President Micheal D. Higgins has declared a national 'Robbie Brad-day' and given every Irish citizen the day off work.

Well, that's what one tech savvy trickster led everyone who woke with a hangover to believe when they mocked up a letter from Áras an Uachtaráin.

We're also led to believe that Micheal D., who was seen jumping for joy at the Stade Pierre-Mauroy stadium in Lille in the moments after Brady's goal, wants every Irish person to 'top up' credit union loans ahead of Ireland's game against France in Lyon on Sunday and 'ponder' on what it means to be Irish as we splash the overdraft cash.

Michael D. Higgins, the President of #IRE. He may be small, but sure isn't he a legend #COYBIG pic.twitter.com/BgpSKoMfKA 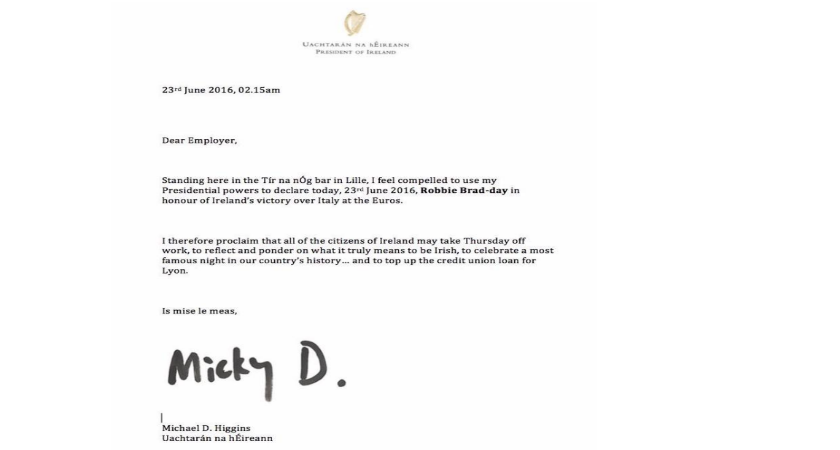 The letter reads as follows:

Standing here in the Tir na nÓg bar in Lille, I feel compelled to use my Presidential powers to declare today, 23 June 2016, Robbie Brad-Day in honour of Ireland's victory at the Euros."

I therefore proclaim that all the citizens of Ireland may take Thursday off work, to reflect and ponder on what it truly means to be Irish, to celebrate a most famous night in our country's history ...and to top up the credit union loan for Lyon."

Brady's goal last night is even better with Titanic's theme tune playing in the background...