AMID the blocks and the tackles, the massed defence, positional intelligence, athleticism and overwhelming priority of the team over the individual, it’s easy to ignore the fact that only Dublin have averaged a higher score per game ratio than Tyrone this season.

Pining for the old days may be a necessity to get an interview, let alone a job on The Sunday Game, but while Pat Spillane is convinced Mickey Harte's team is strangled by fear and nowhere near as entertaining as the Kerry sides of yore, there’s enough evidence to suggest Tyrone are easier on the eye than they were on Armagh.

On Saturday they scored 3-17 against their neighbours, following on from the 22 points they registered against Derry, the 1-21 posted against Donegal and the 2-17 that was visible on the scoreboard when the final whistle was blown at the end of this year’s Ulster Championship final.

And once again the scoring burden was shared around. David Mulgrew stepped off the bench and stepped up to the mark, getting 2-1. Peter Harte notched up 1-2 while Sean Cavanagh and Mark Bradley contributed seven points between them. 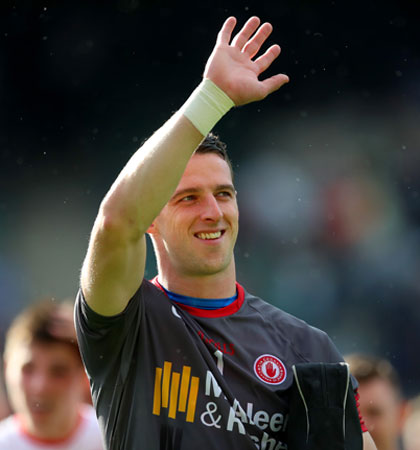 And that’s before we mention Niall Morgan, their goalkeeper, who scored twice. Or Tiernan McCann. Or Colm Cavanagh, Declan McClure, Mattie Donnelly and Darren McCurry.

For a team to have 10 different scorers on one Championship day is remarkable, but it’s not the first time it has happened this summer. In fact, against both Derry and Down, they had 11 different scorers, while 12 players hit the target against Donegal.

Across the season they have averaged 23.7 points per game, the second highest scoring return out of the eight quarter-finalists. “Maybe one of these days we'll not be seen as a defensive team,” Harte, their manager, said afterwards.

Well, that’s unlikely, because they are one. Yet despite this adherence to a safety-first philosophy, there is so much about their game-plan that is difficult to fault.

Tyrone's method is related to Harte’s profound confidence that they have the players, and the system, to dominate almost any side who are put in front of them.

“I always felt we were in a better place than Armagh,” Harte said, “because while they were a side that had gained a bit of momentum, you have to look at the reality of it, which is that they played their football in Division 3 and we played ours in Division 1. So we did expect to win the game with a bit to spare.

“And then you add in a couple of other issues, like the hurt felt from losing to them three years ago, and also the disappointment that came from walking out of the Championship at this time last year. That has been brewing for a year and yes, you have to store those things and bring them to use if you can.

"But you can't depend on hurt either as a motivating force. You have to have quality players who are prepared to put their bodies on the line and get those results. No amount of mental wanting to do that will make it happen, the players have got to physically go out and make it happen. We did that.”

And they did so in style. Sean Cavanagh, playing his 88th Championship game, has been reinvented once again, after starting his career as a half-forward before he relocated to midfield and then to full-forward.

These days he fulfils the dual requirements of being regimented in defence when the opposition have the ball and free-spirited in attack whenever Tyrone gain possession inside the opposition’s 45. 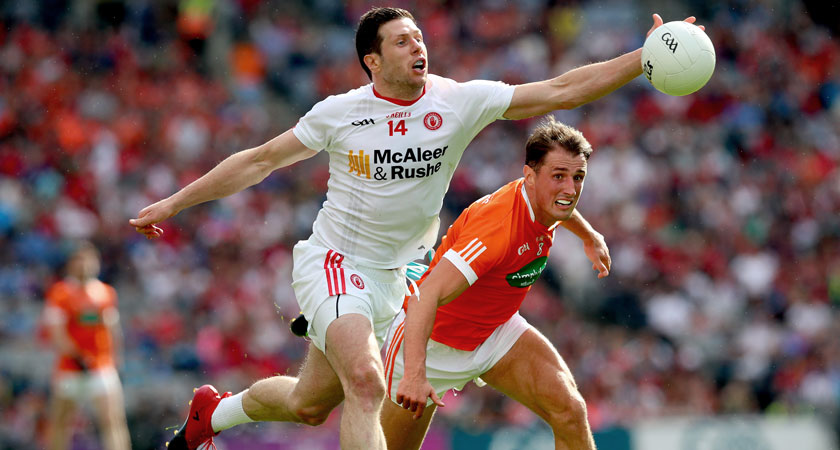 Sean Cavanagh has been reinvented once again (Image: inpho.ie/James Crombie)

On Saturday, he’d plenty of opportunity to feel liberated. Tyrone, in every aspect of their play, were simply too good, too skilful, too fast and too smart for Armagh.

And then, when the changes were made and the substitutions came on, they rediscovered the value of Mulgrew, who was a starter in their Ulster campaign, but a replacement here. Each of his two goals were exceptionally well taken.

Considering too that Ronan O’Neill was similarly productive when introduced off the bench during their Ulster final victory and there is a case to be made that for once, Dublin’s strength in depth may have found its match.

Jim Gavin too may have finally met his match, three years after he last lost in the Championship.

A counter-attacking strategy picked holes in his game-plan that day and when you consider that Harte stands on the same side of the theoretical chamber as Jim McGuinness, there's a compelling case to be made which suggests that Tyrone can do to Dublin in 2017 what Donegal managed in 2014.

"They probably have a belief as well that they can win," Kieran McGeeney, the Armagh manager, said afterwards. "But when they play Dublin, a lot will depend on how the referee interprets their tackling. Like, when they played Kerry during the league, there were a lot of scoreable frees given that day.

"But in the Championship to date there has been a different interpretation. Small things like that can make a big difference."

And so 14 years after his first All-Ireland and eight years on from his last, Harte could eventually be heading back for glory.