ROY KEANE has slammed England goalkeeper Jordan Pickford after he failed to keep out Bruno Fernandes' shot during Everton's 1-1 draw with Manchester United on Sunday.

The game was a story of two goalkeeping errors, after David De Gea - with about as much urgency as a surfer lying in a hammock - cleared the ball directly onto the boot of Everton's Dominic Calvert-Lewin, and watched it sail into his open net.

Pickford's mistake wasn't quite as glaring as his Man United counterpart's, though Keane was quick to express an equal amount of disgust with both players.

He even went as far as to say the Everton and England number one "wasn't up to it".

"I don't need to see your stats, I know he [Pickford] is not a good goalkeeper. We said it before the game, he is not up to it," said Keane, who was appearing as a pundit for Sky.

"We spoke before the game about Everton making progress as a football club, he is not a good goalkeeper.

"I don't get that, when people say the ball is moving, of course the ball is going to move when someone kicks it," the Irishman snorted.

"I swear it's crazy. You talk about people being too clever, Ok I know it all comes out from the back [in modern football] but he [De Gea] just takes too long. 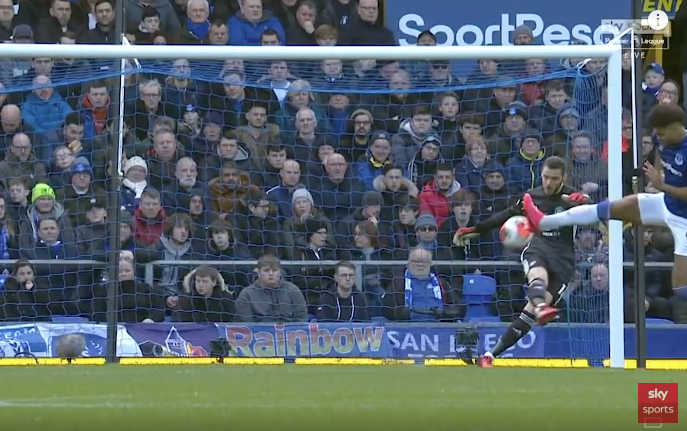 What is he playing at? David De Gea's clearance is blocked by Calvert-Lewin, who puts Everton ahead

"What is he waiting for?

"If you're going to make a decision at least do it quickly.

"I think there's almost a bit of arrogance to it. I know keepers can make mistakes, but there's no excuse for that."

Fortunately for the two red-faced goalies, the focus of match was stolen at the death by another contentious VAR decision (surprise surprise).

Calvert-Lewin thought he'd grabbed a late winner for Everton after his deflected shot crept it's way inside the near-post with a minute left on the clock, only for Gylfi Sigurðsson - who was sat offside preparing for a picnic - to be deemed to have 'interfered' with De Gea's line of sight, despite not touching the ball.

Upon review, VAR ruled the goal out, with Toffees boss Carlo Ancelotti transforming from dear old Mr Carlo from down the street to Don Carleone in a matter of seconds.

While the new video assistant mafia continues to suck the life out of football, at least Pickford and De Gea could thank their lucky stars Keane had something else to talk about once the full-time whistle blew.