THE hero of Stuttgart made his way quietly through the hotel lobby, eyes darting everywhere as he searched for the man he had come to see.

Suddenly, out of nowhere, a young boy blocked his path. He must have been eight-years-old, nine at a push, yet he possessed the type of confidence many men wouldn't have. "Please Ray, could I have your autograph?" he asked.

"My granddad," said the boy. "He's sitting over there."

Granddad was looking on with a mixture of shock and awe. Slowly and awkwardly, he got off his seat and walked across the foyer to join his grandson and the man who put the ball in the English net 27 years ago.

"I've shown him all the footage from Euro 88 and Italia 90," said the grandfather. "He loves it. Only thing is, he keeps asking, 'why aren't Ireland any good anymore?'

The little boy isn't the only one asking that question, but with a double-date against England and Scotland coming up over the course of the next 11 days, opportunity knocks for this generation of Irishmen to come-of-age, just as Houghton's team did nearly three decades ago.

"There are similarities between now and then," Houghton says. "The fact it's Scotland on June 13 .... well that brings back memories to me.

"We were in a similar stage of development then. We'd come off the back of a disappointing World Cup campaign. We'd a new manager in charge and were drawing key games - Belgium away if I remember correctly - with last minute equalisers.

"But we needed a big win to announce ourselves. We needed something to say, 'we're here now, you have to take us seriously'. And we got that in Scotland. And that's the type of win that this team needs now - something to give you a springboard.

"When we beat Scotland 1-0, it took off. We grew in stature and went on to beat Bulgaria 2-0 to qualify. We beat England in Germany. We made it to Italia 90, reached the quarter finals, stayed unbeaten in the qualifiers for Euro 92, made it to USA 94. A lot came from one result (in Scotland). That win helped us to believe." 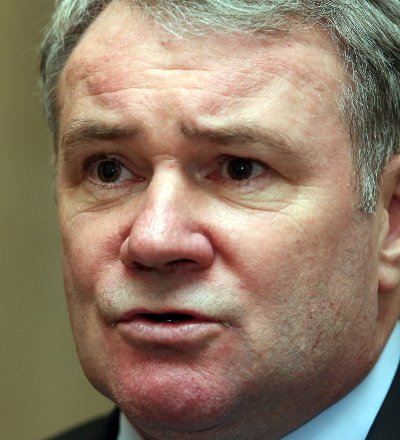 Had that result in Hampden never happened then you wonder if there'd ever be scenes like the one in this hotel. Would YouTube footage of Houghton have any relevance to an eight-year-old boy in 2015? Or would his name be lost to generations, like a Mickey Walsh, a Don Givens or a Gerry Daly?

"It's an unbelievably proud feeling to be remembered for what we did back then," says Houghton. "I mean, as a player, you know you are fortunate to be playing professionally. You want to play domestically to start off with, then you want to get to a cup final, then to win a league but the ultimate goal is to play international football.

"To be at the big tournaments is where you want to be tested. Euro 88 was massive, absolutely huge, for many good reasons. It advanced football in Ireland. It made our profiles as players much higher. Even now, 27 years on, we are all remembered for what we did back then. That's brilliant."

He isn't stuck in the past. He has moved on and wants this team to create its own history. He wants someone else to score a winning goal against England. "Was 1988 our last win over them? Really? Well another one is long overdue."

And most of all, he wants qualification.

"While it is nice that people are remembering 1988 and 1990, that people are saying, 'it's 25 years now since Italia 90', you really want this team to win. You want them to knock the door down, get to France and do well over there, so that the current generation of supporters can have the great times that Irish people enjoyed way back in the 80s and 90s.

"And we're not far away. One of the things that has been noticeable in this qualification campaign so far is that we went behind against Scotland, Poland, Germany.

"We need to get a platform to start from. I'd love to see what the opposition are like if they had to chase the game, if they were a goal down, if we had something to hold onto.

"That comes down to confidence. The players simply have to believe in themselves a little more going into games."

Victory over England could inject some belief - but it's a game Houghton is keen to place in context.

"If I was still a player, I'd want to play against Scotland. The England game is nice, a prestigious friendly. But there is the key word. It is a friendly.

“You get no points for it. You get a cap for it. But at the end of it, where you will be remembered is if you play Scotland, beat them and get to where you want to go, France next year.

He hopes James McCarthy shares his philosophy because the Evertonian is a player he rates. And yet he has still to see the Everton McCarthy turn it on in a green shirt the way he does in a blue one.

"He is a good player, but we are waiting for a game for him to shine. There are a lot of clubs looking at him for obvious reasons because they think he is talented. And he is.

"But there is more in him. You can extract more from James. He can score a few more goals. He can be a bit more attack minded. I liked the runs he made against Poland and I would like to see more of that.

“He is an all-rounder. He can defend. I have seen him play virtually as a third centre-half for Everton, and he does that really well. But he could probably do more going forward."

The Scotland game, Houghton hopes, will focus his mind - just as it did for him 28 years ago.

"I'm glad there wasn't social media then because I'd have been hammered," he says. "As it was, I still got it in the neck. I was called a turncoat, a traitor, blah, blah, blah. My dad heard it all, my brothers too. It wasn't nice.

"Aiden (McGeady) and James will get all that. But it can help rather than hinder you. I was in the zone that night. All I wanted was to play well. That is how these guys need to think."