The Red Hands crashed out of the All-Ireland at the semi final stage at the weekend to Kerry, despite leading for much of the contest.

Cavanagh called Harte “an amazing servant for the county” but said on the Sunday Game that the time might be right to go in a different direction.

He speculated that Fergal Logan, Peter Canavan, Brian Dooher and outgoing Monaghan manager Malachy O'Rourke could be key names on the frame if Tyrone were to make a change.

After 17 seasons is it time for Mickey Harte to go? #rtegaa pic.twitter.com/7fGdc5XyXL

But Mulligan was having none of it.

“Sean always has lots of notes in front of him during those broadcasts, but he must have lost the page on what Harte has brought to Tyrone,” the Paddy Power ambassador said this week.

"Incredibly, he summed Mickey Harte with just six words. 'An amazing servant for the county.’

"Really, is that it Sean? Jesus! I know men that have served committees that are amazing servants for the county.

"He's delivered 37 trophies in 28 years. 23 of those trophies with the Tyrone Senior team. Mickey revolutionised the fortunes of county football in Tyrone, and all Sean can offer is six words on him before he went on to humiliate poor Malachy O'Rourke. 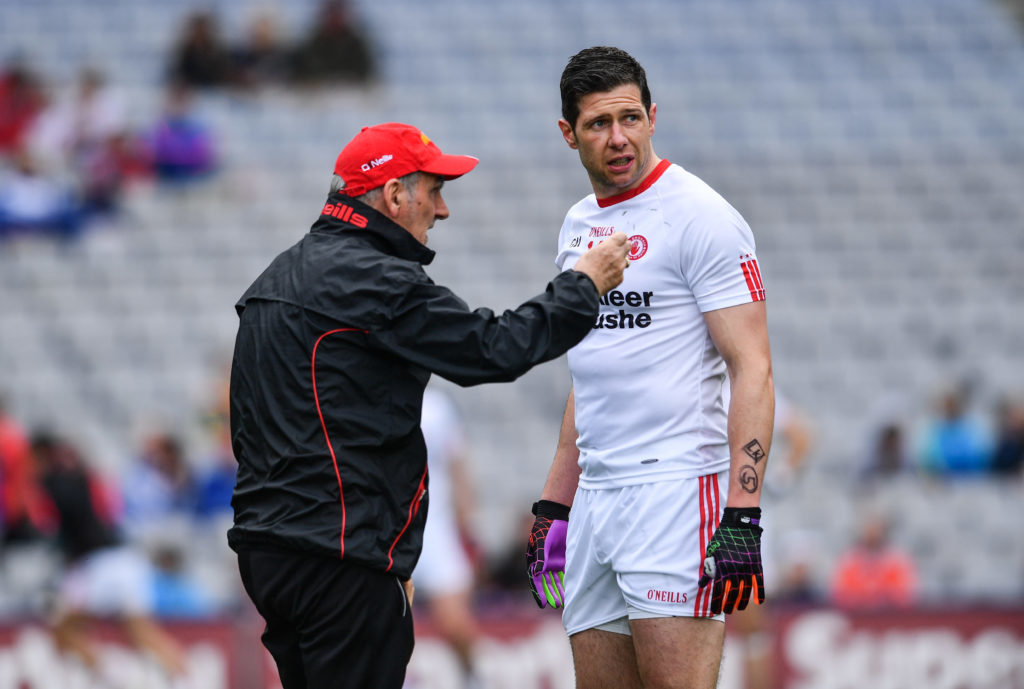 Tyrone manager Mickey Harte in conversation with Sean Cavanagh ahead of the GAA Football All-Ireland Senior Championship Quarter-Final match between Tyrone and Armagh at Croke Park in Dublin. (Photo By Ramsey Cardy/Sportsfile via Getty Images)

"Yes, Malachy and others inside the county might well be interested in the job, but they aren't going to declare that when Harte still has another year to run on his current arrangement with the county board.

“Harte will be sore, not because of Sean Cavanagh’s embarrassing comments, but because Tyrone let the semi-final slip away from them when it was there for the taking. Tactically, Peter Keane got one over on him.”

Mulligan did concede that the way Tyrone fell away against the Kingdom in the second half was a major cause for concern.

We don’t act with haste in Tyrone

“When we played under him (Harte) we emptied the tank on almost every run. Not because we had to, but because we were s**ting ourselves in case he spotted it and called us to the line.

“Lads jogging about, marking space instead of close man-marking, substituting players that are playing well and leaving others on that have lost form. These things never happened before.

“Five All-Ireland semi-final defeats in the last six attempts would spell the end for a Kerry, Dublin or Mayo manager. We don’t act with the same haste in Tyrone. That’s down to the man that we have in place.

He added: “This time next year he will either have turned it around or have decided to call time on his incredible management career.

“But, those who know him will take a few more than six words to sum him up when the time comes, that’s for sure.”

Tyrone need to turn it on against Kildare or the knives will be out for Mickey Harte, warns Owen Mulligan