WE ARE taking a look towards the future.

We have all just about gotten over that disaster of an international break back in March.

And instead of wallowing in sorrow and going over how poor of a week it was, let's instead look towards the future, and examine what sort of team we may be putting out in four years time.

Here's the side that we reckon Ireland will lineup with in 2025. 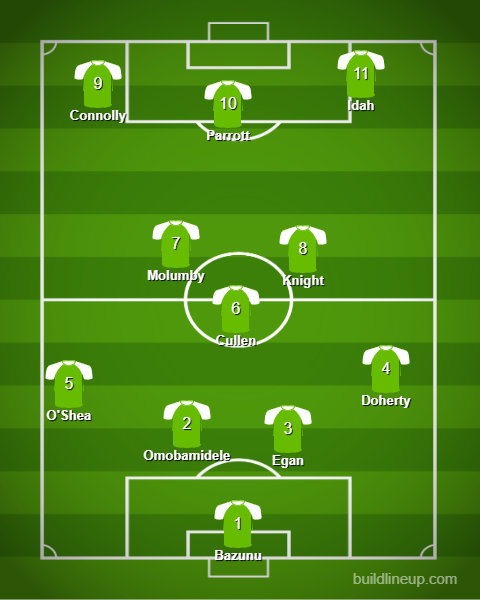 In goal we've gone with Gavin Bazunu. The youngster was the most impressive part of that dreary international break, and could end up being second in command to Ederson at Manchester City very soon. Pep will love the way he plays with the ball at his feet, so let's hope he keeps progressing at the rate he is now.

At the back we have gone with John Egan at centre-half, alongside 18-year-old Andrew Omobamidele. Egan will be the captain at this point at the age of 32, and will provide experience alongside the young Kildare man, who will hopefully be a Premier League or Championship regular by then.

Our full backs will be well used to playing for the Boys in Green at this point, and while Dara O'Shea will be slightly out of position, he is well able to slot in at left full. Doherty will be coming to the end of his career, but will have more than enough quality to continue to keep making the squad, albeit in a slightly less attacking role.

The midfield trio will be made up three dynamic ball winners - Jayson Molumby, Jason Knight and Josh Cullen. Hopefully, these three young men will be well established midfielders at this point, and will make up our midfield for the next 10 years or so.

And the front three is a really exciting prospect. All will still be aged below 25 in four years time, despite somewhat establishing themselves already, which shows what sort of potential we're dealing with here.

Troy Parrott will play in an almost False 9 sort of position, while Connolly and Idah will provide tremendous pace and athleticism either side of him.

Now let's try not to get excited, but that looks like a fairly strong side to us. And if all else fails, we'll just roll Wes Hoolahan out of retirement one last time.