Rare chance to show true nature of Irish in Britain

THE LONDON footballers will know by now what Andy Warhol meant when he said everybody will be famous for 15 minutes.

At the team’s press night, guys who train and prepare all year in perfect anonymity could barely move for big fluffy microphones, TV cameras and large silver disks held next to their faces so as to best reflect the light onto their features.

Their features, truth be told, held expressions of mild bemusement. ITV, BBC, Sky, Marty Morrissey with a first-class suntan… it was all a bit absurd.

In keeping with the absurdity of it all, we’re going to quote Oprah Winfrey.

“If you come to fame not understanding who you are, it will define who you are.”

The reason we think the London lads will pay all this attention the lack of attention it deserves is that they know who they are — and who they’re not.

They are not the Kings of Kilburn High Road of popular depiction…  waiting on street corners in north-west London at dawn with a hangover, hoping to be selected for a day’s labour, before kicking a bit of ball and then all back to the Broadway boozers again.

Nor are they a Mammy-missing, King Crisp-chomping, Skypeing, Generation Emigration fairytale.

Like any group of 30 or so people, they are beyond generalisation. If they do have a unifying trait it is that they are a bunch who all chose to leave their home, their comfort zone, and seek to better themselves.

As a team, they have applied that professional work ethic to their football. Making a Connacht final is not just a dream but a reality they feel they deserve; the result of years of commitment and striving for something greater than what they have. 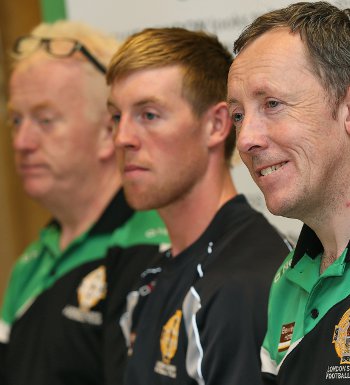 In making such progress they have represented the Irish in Britain with honour, which is no small thing.

County footballers play for themselves, their family, their club and the jersey. The jersey has a significance beyond sport; the colours portray a way of life, an identity to a place, something unique.

Stitched into the Exiles shirt is the toil of thousands of players and mentors who kept Gaelic games going here through some bleak years; when numbers were scarce during the Celtic Tiger era and, far worse, in times of Trouble when expressions of Irishness were not welcome.

The Exiles shirt also means the labour of hundreds of thousands who, brick by brick, built the great cities of Britain, who dug the tunnels and put down roads and railways; the shirt represents giants of the industrial age who sent money they scarcely had back to Ireland when the country was, as it is again, in the economic mire.

All this is not hyperbole, it is merely to observe that to play sport at a high level is to represent something a lot bigger than yourself.

That something bigger is the Irish in Britain, a people not always feted at home. We’re not the Irish Americans, the men and women who shaped the new world — a world that embraced them as tightly as they did it.

The Irish in Britain are a more complicated tribe. We went the other way, into the heart of the old world power, an island we have been at varying degrees of conflict with for a greater part of a millennium. There was no JFK moment for us.

Progress had to be eked out. But due to grit and staying power it has been made. We are now taken seriously here. If there is anywhere where the old prejudices remain, Ireland is that place.

This team have borne the brunt of that this summer.

Despite their excellence, coverage of them has been a little strange to say the least. The Sunday Game has been the most high-profile offender; their Skype interview with the team after the Sligo game was cringeworthy and crass.

Kevin McStay’s comment that the team could stay on in Leitrim for a week after the drawn Connacht semi-final was pulled right out of the top drawer of the crazy chest. Meanwhile, the programme has shown a minimal amount of what is most interesting about our team: their football.

This Sunday, that will change. The game will be live on television. London’s assigned role is to turn up, add a splash of colour, and hopefully beat the 18-point spread the bookmakers have offered on them.

What chance London then, a group of guys from all over Ireland who left the country with football second in their mind to opportunities to fulfil their potential in the workplace? Well, 33/1 say the bookies.

Only, the 33rd county is not perturbed unduly by long odds. If they were, they would not be in the Connacht final.