Round-up: What's going on in the League of Ireland?

ST PATRICK'S Athletic lifted the EA Sports Cup and Dundalk continued their seemingly unstoppable march towards retaining the SSE Airtricity League Premier Division title in the latest round of domestic soccer action at the weekend.

It took a tense penalty shoot-out to decide the destiny of the EA Sports Cup, and St Patrick’s Athletic emerged victorious over Galway United at Eamonn Deacy Park.

In front of a capacity crowd of 3,662, Saints’ goalkeeper Conor O'Malley was the hero, making two saves in the shoot-out from Jake Keegan and Andy O'Connell to clinch a 4-3 victory for his side.

The outcome was especially notable for Saints’ midfielder Killian Brennan, who now has five winners' medals in the competition, having won three times previously with Derry City (2005, 2006 and 2007) and with Bohemians in 2009.

Meanwhile, in the Premier Division, a second half four goal haul from leading scorer Richie Towell was the highlight of Dundalk’s 6-0 thrashing of Drogheda United in the Louth derby at Oriel Park.

Dundalk needed a late goal to win the previous two clashes between the sides this season, but after taking a first-half lead when Towell set up Daryl Horgan for a 28th minute opener, the outcome of this encounter was never in doubt.

Dundalk produced a second-half master class in attacking football and finishing, with Towell’s four goals taking his tally to 21 for the season, and David McMillan also got on the scoresheet.

The only consolation for Drogheda was that a repeat of last year’s 7-0 defeat at the same venue was avoided when goalkeeper Micheal Schlingermann made a tremendous save to deny Towell a fifth goal in stoppage time.

Dundalk are now 11 points clear at the top of the table, and need only two wins and a draw from their remaining five games to retain the Premier Division title for the first time in the club’s history.

Following the departure of manager Peter Hutton in midweek, Derry City secured an important 1-0 win over Shamrock Rovers at the Brandywell to move four points clear of the relegation zone.

Dean Jarvis scored the only goal of the game for the Candystripes, heading home Mark Timlin's corner kick with just seven minutes remaining.

The result moves Derry City four points clear of the relegation play-off place occupied by Sligo Rovers, who didn’t play at the weekend and have played one game less than the Brandywell outfit.

With Sligo not in action, Limerick missed the chance to move off the bottom of the Premier Division table after being held to a 2-2 draw at Bray Wanderers.

Goals from Dean Clarke and Vinny Faherty looked to set the Blues on the road to a crucial victory but Ryan McEvoy struck with his second goal of the game with 10 minutes remaining to earn a point for the home side.

In the other Premier Division game, Bohemians and Longford Town fought out a 1-1 draw at Dalymount Park, with the home side holding out to secure a point after playing the majority of the game with 10 men, following Keith Buckley's first half dismissal for two yellow cards.

Paddy Kavanagh opened the scoring for Bohs shortly after Buckley’s departure, when he cut inside from the right wing and fired in a well struck shot from 20 yards.

But on the stroke of half time, Town equalised with Noel Haverty and Ayman Ben Mohamed both involved as the ball went into the net following a goalmouth scramble, although Haverty was credited with the goal.

In the First Division, Wexford Youths now need just three points to secure the title and top flight football for the first time in their history, after a 2-1 win at UCD.

Youths came from behind to clinch the crucial victory, with Danny Furlong’s 27th league goal of the season proving to be decisive and set up the possibility of a promotion party at Ferrycarrig Park this Friday when they host Athlone Town.

Finn Harps kept up their faint hopes of catching Youths at the top, with a Tony McNamee goal earning them a 1-0 win against Cobh Ramblers on Saturday evening in St. Colman’s Park.

A volley from Cian O’Sullivan gave Town a half time lead, which they held until six minutes into the second half when Dylan McGlade equalised for Shels. But Daniel Purdy won it for Town with a cracking shot on the hour.

Waterford United climbed off the bottom of the table, with Cory Galvin’s late winner giving them a 1-0 win over Cabinteely, who now occupy bottom place. 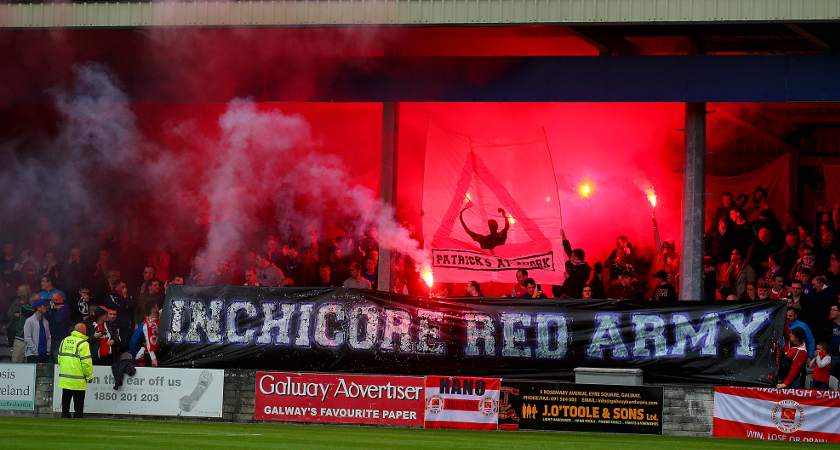